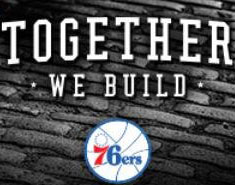 The intuitive answer is zero, I’d never ever win.

Well I am here to tell you, and this is something I don’t like to do, that you’re oh so wrong.

I could beat him and more than once, no doubt about it.  Since it’s my ball and my court, I set the rules.  First to score wins and I always get first possession.  The above scenario is a stupid hypothetical, but after the jump I’ll explain why it has real world applications for the 76ers in 2013-14.

You’re going to be shocked when you look on the sideline and don’t see Chip Kelly coaching the 76ers this year even though we all know Brett Brown is the coach.  The pace that this team should be playing with this year will be insane.  The team averaged 91 possessions per game last year, 5.1 less than the league leading Houston Rockets.  The same reason I expect the 76ers to lead the league in possessions per game, is the same reason I can beat Lebron James in a game of 1 on 1.

The shorter a game is, the more variance is in play.  It’s the same reason Philadelphia won 34 games last year and 35 (in a 66 game season) the year before.  Doug Collins’ coaching style managed to hurt the 76ers in both years all because of variance.  The 76ers last year were clearly a sub 30 win team and the 2011-2012 team was obviously a 40+ (in a 66 games season) win team.  That won’t be an issue this year.  The 76ers are going to have the lowest variance in recent history when you their consider pace and 3pt shooting.

Other than Thad Young, the 76ers don’t have player worthy of playing of playing 30+ minute per game this year for what they are looking to accomplish .  With 240 minutes of playing time to dole out, on any given night, there will be ~205 minutes to split between everyone else.  Except for Spencer Hawes and Evan Turner, everyone else on the team is a mixture of rookies, career journeymen at best, D-League players and guys with injuries.  While it will come as a bit of a surprise, I fully expect minimal playing time from Evan and Hawes this year.  I’ll talk about the reasons why in a later piece.

Which brings finally brings the point of all this.  The better your team is, the more possessions you want in a game.  The worse your team is, the less possessions you want.  The previous sentences are contingent upon winning basketball games as a priority, which Sam Hinkie and Brett Brown have made it clear is not the case.  As you look at the 76ers, you notice a dearth of 3pt shooting talent and 3pt shooting is the 2nd most high variance thing you can do to win basketball games after slowing down the pace.  The 76ers have losing on their minds and the right pieces kind of players to do it even when they play good basketball.