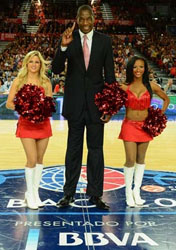 According to NBA.com, the Sixers failed miserably this off-season.

In case you did not catch Sunday’s game on NBATV, the Sixers led by “The Enigma’s” 25 points and Tony Wroten, beat Bilbao Basket 106-104.

NBA.com has the highlights of Sunday’s preseason win.

Bob Cooney of philly.com writes that the signing of Ganai Lawal indicates how desperate the Sixers bigs situation is right now.

A quick “76ers” search on craiglist.com produces this 1983 championship mug.  The price seems a bit high.  Maybe if it came with Guiness in it, I’ pay that number.

According to Woj over at Yahoo Sports, there is a growing divide in Chicago general manager Gar Forman and coach Tom Thibodeau.  It still angers me that I wanted Thibs instead of Doug Collins and the Sixers brought DC in anyhow.

Philly.com’s Keith Pompey talked with Kevin Durant about what it is like to play on a team (Sonics in 2008) that is in full tank mode.

Over at broadstreethoops.com, Derek Bodner has an excellent post on the qualities of an effective ownership group.

If you haven’t done so already, please take a few minute to watch Bill Simmons and Jalen Rose preview the 2013-14 76ers.

Nicole Auerbach posted a solid piece on Andrew Wiggins and how he is ready to handle high expectations.

Jason Wolf of the USA Today note sin his 76ers preview that Evan Turner was expecting to be traded this summer.

Rob Mahoney of SI.com points out that Moses Malone would be a great mentor for Blake Griffin.

TrueHoopTV also previews the Sixers upcoming season and has a video interview with Brett Brown.