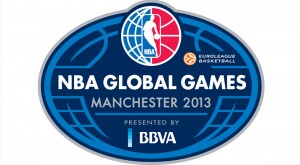 With  the Sixers’ Global Game in Manchester, England against the Oklahoma City Thunder kicking off today, what better way to prep for the game then to hear all about what it’s like to be a Sixers fan in the U.K. from a friend to the site, Robert Covell.

Covell has been following the Sixers across the pond from the early ’80s and is excited about the expansion of the NBA’s popularity in Europe in the coming years.

After the jump, I’ll delve into what Covell and I talked about regarding the Sixers, the NBA’s expansion into Europe as well as what it’s like to be a fan in Euroland.

First of all, although basketball is a globally popular sport, Europe’s the land of another type of roundball — especially in Manchester. Manchester is the home to Manchester United, one of the world’s most popular soccer clubs. Yesterday, during the Sixers’ venture through Manchester, Spencer Hawes even stopped into the great Old Trafford Stadium to catch a tour of the historic site.

NBA fans are growing in Europe, but they’re like soccer fans in the USA. At a young age, more kids are likely to pick up a baseball, football or basketball then to kick around a soccer ball.

That’s why it’s interesting that in the land of checkered colored balls, Covell found himself drawn to the brown leather one. It was his intrigue for No. 6, Julius Erving which made it happen.

“I became a Julius Erving fan when I read about his behind the backboard score,” said Covell. “The imagery I had in my mind of that play stuck with me until I saw it live five years later. In 1983, 20 minutes of the NBA Finals was shown on a Saturday afternoon sports show. There was Dr J. These became my Sixers.”

Star power — isn’t that what draws most kids to sports fandom? I was never a soccer fan until I saw Cristiano Ronaldo play for the first time in the 2006 World Cup for Portugal. The moves he could make with a soccer ball were unlike anything I’d ever seen before in my life. Seven years later, I’m still following his career with Portugal and for Real Madrid. Why? Because players like Ronaldo don’t come around often, just like Dr. J for the Sixers.

To be a true fan of a team however, you have to be able to watch the games. This is one of the obstacles that Covell has dealt with throughout his lifetime as a Sixers fan in London.

“We’re five hours ahead of EST, so I can usually work out when I have to go to bed before work the next day, but that’s just if it’s a home game without overtime,” said Covell. “NBA League Pass has opened the Sixers up to me over the last three seasons. To watch every game means I can really know the team. In the past you could only get games by mail order DVD or satellite TV. It’s a difficult balance now of late nights, or trying to wait until after work the following day without hearing what the score is.”

Luckily for Covell, he won’t find too many Sixers fans in London to spill the beans, but in a digital age it’s harder than it sounds to keep the games results under wraps then it was even a year ago. I know I’m updated on any Sixers updates with the Bleacher Report Sixers Stream App, not to mention my Facebook or Twitter feeds. For now however, Covell should have an easier time avoiding the scores of the red, white and blue then some of the NBA’s other teams.

“The team was bigger here when Iverson was on his game,” said Covell. “Every now and then I’ll see a jersey or cap around. A guy came up to me the other day when I was wearing a Sixers top and he started telling me about Andrew Toney. I met two people from Philly in London this year and I showed them my Sixers tattoo, but you have to take it when you can get it. There’s too many Heat and Lakers fans around right now. People like success.”

Success may not happen for the Sixers very soon, but in terms of building the NBA’s brand overseas it’s in full force. Covell weighed in on what he thought of the NBA’s expansion into Europe and what it means especially to the U.K. with the Sixers and Thunder meeting today.

“The U.K. has had an appalling record in basketball,” said Covell. “We have talent, it’s here no doubt, but we cannot develop it on a large scale. Institutions move slowly here. Even for the 2012 Olympics, FIBA was reluctant to grant us the automatic right to play as the host nation, because they knew the U.K. governing body in basketball was not up to the task of developing the game here. The NBA has taken a lead, and people love the game for it.”

Finally, I talked to Covell about his favorite team from the States, the Sixers. I asked him when he believes the team will be competitive again. It’s an opinion as astute as any fan from Philadelphia’s who’re less than five minutes from the Wells Fargo Center — only this fan is over 4,000 miles away.

“The 2015-16 season,” said Covell. “That’s the start of it. I’d like to think we’re using the Thunder’s recent model as the way to develop, although with the developments in the game, the new CBA having an impact and how players may even be valued with more parity, it’s a whole new ballgame. I’m glad basketball is taking a lead. In soccer, no one even talks about assists, it’s archaic. If the U.S. ever got hold of soccer in a big way, the game would be transformed. It’s a fascinating time in the NBA. For my Sixers, a title has to be a 5-year plan.”