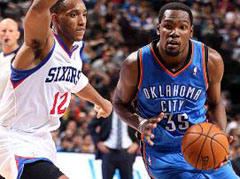 Despite some surprisingly strong shooting from beyond the arc, the Sixers fell to the Oklahoma City Thunder 103-99 in Manchester, UK.

Credit the Sixers for keeping it close throughout what many expected to be a lopsided loss, but in the end Kevin Durant and Co. proved tough to topple.

The game started out sloppily, as preseason games tend to do, with both teams missing their first couple attempts.  The Sixers found early offense in an unlikely form, as Michael Carter-Williams and Tony Wroten, two guards who are supposed to struggle putting the ball in the basket, combined for seven made three’s, including three in the first half.

Consistently connecting on these shots is a good sign for both of these guys, as adding a respectable shot would greatly add to each of their value and versatility.

As they did in their victory in Bilboa, the Sixers continued to employ an up-tempo style, substituting early and often. Their offensive sets involved looking for points in the paint or open outside opportunities; the team’s new mantra, evidenced by their 30 total attempts from long range.

Despite the promising play of Wroten (again), who finished with 20 points, and the semi-solid shooting of Carter-Williams, the Sixers committed too many turnovers (20) and allowed 40 points in the paint.

Evan Turner continued to be an offensive option for Philadelphia, finishing with 19 points and 4 assists.  All of the other Sixer starters except James Anderson also finished with double figures.

Durant, who missed some shots he would normally make early on, did his best Russell Westbrook impression, dishing out 12 assists to go with 21 points in 33 minutes of action.  His 14 point outburst in the third quarter gave the Thunder an edge they never relinquished.  Westbrook’s actually replacement, Reggie Jackson, was the game’s leading scorer, putting in 29 points along with 8 assists.

Despite the loss, the team’s energy should be appreciated, as the effort was there, something Brett Brown is adamant about.

“This team will play hard,” he stated during last week’s training camp.

In Manchester the Sixers showed points of promise, most notably the passionate play of Wroten, the continued aggression of Evan Turner on offense, and the idea that maybe Michael Carter-Williams can make some three’s; all intriguing aspects to keep an eye on as the season creeps closer.

NBA.com has highlights of the Sixers loss.