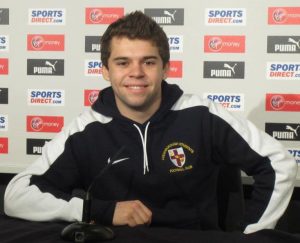 BLEEP! My alarm goes off, game day is finally here!

At age 21, I have been a fan of the NBA for the last six years of my life. Never did I imagine the Oklahoma City Thunder and the Philadelphia 76ers would be playing a game in my home city, Manchester.

The only way this day could have got any better was if my beloved Charlotte Bobcats were making the trip across the pond, but you can’t have everything!

I was excited to meet other basketball fans and have intelligent arguments with them over who’s going to be the front-runner for 6th man of the year and how OKC will compensate with Russell Westbrook being injured. However, I spent most of the day meeting confused fans such as the guy sitting next to me wearing a Kevin Garnett Celtics jersey and Kobe Bryant Lakers hat. Dude seriously? I also spotted a woman in attendance in heels and a skirt which was way too short for the occasion, did she know she was attending a basketball game!?

This is the story of my experience from the 76ers vs. Thunder game in Manchester, all I can say is I am embarrassed to be British…

Before the game I visited the NBA Fanzone which was set up in the Manchester city centre. They had shooting competitions and had “NBA legends” in attendance such as John “I recently came out” Amaechi and Peja “apparently now I’m a legend” Stojakovic. They also had some of the 76ers players come down. The NBA Fanzone presenter gave each player a big introduction and  heralded the “NBA stars” Tim Ohlbrecht and Vander Blue.

As each was introduced there were various loud whispers of “who are they?” from the surrounding fans. I looked around and everyone’s face was blank, so I proceeded to inform a crowd of thirty or so people who they were and where they had played. It didn’t really matter to the fans, they still wanted autographs and pictures just because they had been told these guys were famous. However, the autograph session was cut short when a fan decided to dunk his missed FT attempt and shattered the backboard. 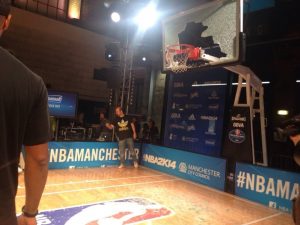 But, onto the game itself. I arrived at the terribly named Phones 4u Arena and sat in my terribly cheap seats.  The game must have only sold about 80-percent of its tickets as I could see huge amounts of empty seats in the lower tier. In fact, there were so many empties, I was able to successfully sneak just fifteen rows from the court in seats worth over $280 apiece.

To put that price into perspective, I could go to 35 Bobcats games for that price and based on this story from the Sixers last season, possibly the entire set of home games. Affordability is one area that the Global Games must focus on in the future if they want to sell out and be successful.

Upon arrival I handed out a little NBA quiz which covered the 76ers and Thunder as I wanted to gauge the interest and knowledge of the British fans. I use the term British fans lightly, as I met people from Poland, Germany, Spain, Brazil, France and Denmark and that was just the people sitting next to me, I guess it is called the “Global Games” for a reason.

There was a group of Irish guys behind me who shouted “You couldn’t score in a brothel” on more than one occasion and were debating if the 76ers Cheerleaders were lining up in a 4-4-2 soccer formation. This is the British basketball fan. In fact, I’m willing to bet that I heard more people talking about Manchester United’s struggles and David Moyes getting fired than I heard basketball discussion.

But back to the quiz, when asking people, “do you have a good amount of NBA knowledge?” about 75-percent of people nodded and said “yes of course”. Below is the quiz I handed out, and the most entertaining answers I received.

How did you do? The average score from the not-so-English, British fans was a dismal 4/10. Keep in mind that I saw people cheating by using their phones while taking the quiz and they STILL did this bad. This just goes to show me that the people in England did not attend this game to support their team, but were simply there for the spectacle. Enough rambling about my experience however, I will now get into some notes from the game.