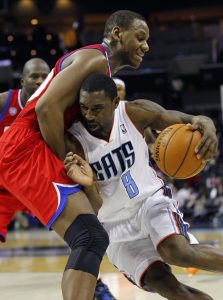 For the past half-decade or so I’ve looked at the Charlotte Bobcats as the NBA’s doormat; a terrible team that is going nowhere as it’s currently constructed. If I ever felt bad about the state of the Sixers, I could at least look back at the Bobcats and say, “At least we’re not Charlotte.”

Well, after getting not only beaten, but destroyed in basically all areas of the game by Charlotte on Thursday afternoon, it is safe to say, the Sixers are Bobcats-bad.

The final score of the game was 110-84, but most of the time it didn’t even feel that close. Again, this is the Bobcats we’re talking about, a team that has become synonymous with sucking.

The Sixers were missing three starters in Thadeus Young, Spencer Hawes, and Evan Turner, whose production may have kept the game close. But this isn’t Miami, and those three guys aren’t LeBron, Wade, and Bosh. Generally you need at least four or five solid contributors to win an NBA game. Outside of those three just mentioned, the Sixers may struggle to find any this season.

It’s difficult to pick out the positives from this Bobcats blowout, as there weren’t many, if any. Every single Sixer that saw the court posted a negative +/- for the game. Kwame Brown got a -5 for just being on the bench.

In all seriousness though, every Sixer contributed to the putrid play, as the 7-6 were outplayed in every aspect of the game. Tony Wroten’s energetic 20-point performance may be the lone bright spot, although he also struggled with turnovers and shot selection.

Royce White flying on a plane with the team literally is the best take-away from the team’s trip to Charlotte, and that’s saying something.

If the Sixers want to take their tanking to the maximum level, they should consider sitting Turner, Young, and Hawes for the entire season, because the lineup that’s left is not capable of competing on the NBA level, let alone contending in any contest.