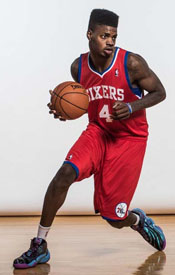 The prevailing notion through the years after a high-profile athlete suffers a serious knee injury, or any injury for that matter, is that the athlete’s mindset is to return as soon as possible.

In some circles, that notion still holds true, namely with Adrian Peterson. The Minnesota Vikings star running back tore the ACL and MCL in his right knee on Christmas Eve, 2011.  He wound up starting Week 1 of the 2012 season just nine months later, rushed for 2,097 yards and was named the NFL’s Most Valuable Player.

It’s important to note how Peterson went about his injury recovery because Chicago Bulls star point guard Derrick Rose went about it very differently and now, despite Brett Brown’s backpedaling yesterday, it appears 76ers rookie Nerlens Noel is about to follow that same route.

Rose, the 2011 MVP, tore his ACL in Game 1 of a 2012 first-round series against the Sixers.  He was obviously out for the year, but he proceeded to take the entire 2013 season to not only recover physically, but to get his mind right to step on the floor again at full-health.

Rose was cleared for contact in late January, cleared to play in late March and still, he decided not to play even after reports began to surface that he was dominating in practice.

Head coach Tom Thibodeau, always coy with the media regarding injuries, refused to ever rule Rose out of games, namely against the Brooklyn Nets in last year’s first-round, seven-game playoff series.

“I guess there’s always a chance,” Thibodeau told the media in Brooklyn on Apr. 20 before Game 1.  “He’s worked extremely hard and he wants to be out there very badly.  I know I’ve said it often that he’s close and he is, but he can’t quite make that final step and until he can do that, we’re just gonna have to remain patient and as I mentioned this morning (at shootaround), it is unlikely that he’ll play, but the way the playoffs are structured, a week from now, maybe he does that make that final step, so I don’t want to rule it out.”

Noel, a 6-foot-10 shot-blocking sensation once viewed as the presumed No. 1 pick in the NBA Draft, tore his ACL on Feb. 12.  He had successful surgery and the timetable was set at 6-8 months.  By June, ESPN had reported that Noel was ahead of schedule, albeit not ready to open the season for the Sixers, who acquired Noel in a draft night trade with the New Orleans Hornets.

Then, rookie head coach Brett Brown surprised everyone with this comment…

“I doubt, everybody doubts that he’s going to play this year,” Brown told the media Monday evening before the Sixers played the Cleveland Cavaliers.  “We don’t want to waste this year.  I think from a skill perspective, it’s an opportunity for us to break down his shot, really work on his free throws and start a little bit from ground zero.”

It isn’t breaking news that there are deficiencies in Noel’s game.  Yes, he could make a very fine living, probably for better than a decade, by doing the three things he is really good at, being an athlete, rebounding and playing interior defense.

What Noel lacks is exactly what Brown said.  He shot 52.9 percent from the foul line in his lone season at the University of Kentucky and while he did shoot 59 percent from the field, he proved to be a liability outside the paint.

Taking the year off would not only help the Sixers develop Noel’s skill-set, but there would be no pressure to perform as a highly-touted rookie coming off a recent and serious knee injury.  He could improve his skills, add some muscle to his still-wiry 228-pound frame and come back in 2014-15 ready to contribute as a rookie.

Besides, with or without Noel, there doesn’t figure to be much winning going on in Philadunkia nation this winter, meaning a spot in the Draft Lottery is all but a given.

On paper a year from now, a healthy and more developed Noel, Michael Carter-Williams with a year under his belt, Thad Young and a high draft pick in the 2014 NBA Draft that is slated to be one of the deepest ever, is not a bad nucleus for General Manager Sam Hinkie to build on.

Josh Newman is a contributing scribe for Philadunkia.