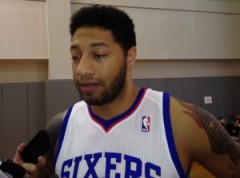 White was surprisingly given the axe by Hinkie and Co. along with guards Khalif Wyatt, Vander Blue and center Mac Koshwal to bring the teams roster down to 16.

White, who has had a media circus surrounding him of Andrew Bynum-like proportions since his addition to the team in early July, was looked at by many analysts, including USA Today’s Jason Wolf, to be a lock on the teams roster come opening night.

In my opinion, this was a statement move by Hinkie. He gave White a second chance by bringing him in from Houston and has given White since July to condition himself into game shape before the season.

Instead some questionable pieces for the team are left like swing man Rodney Williams (who just returned from a lingering hamstring injury), forward Gani Lawal (who Hinkie grabbed from the Latvian League and hasn’t played a tick in the NBA since the 2010-11 season) and forward Hollis Thompson who is a hard worker but didn’t show the Sixers anything during preseason.

I’ve avoided writing love affair-type posts about White unlike other Sixers blogs, because to me he hasn’t ever shown me the motor or reliability it takes to succeed at the NBA level. There’s too many talented athletes who are willing to give 150-percent to get a shot on an NBA roster, something that White has never seemed to care about.

But the season goes on and the Sixers are left with 16. I would’ve loved to see Khalif Wyatt suiting up for the 7-6, but the Temple product and Norristown native just wasn’t able to do enough in preseason to win a spot. Vander Blue showed some real competitiveness in the preseason, but unfortunately Tony Wroten and Darius Morris just showed that much more. It’s the business of the game and hard decisions must be made.

Team WHOP’s logo will continue to live on (on my Twitter page), but it’s not going to be the same the rest of the season now that two of WHOP’s crew members are gone.

Hinkie now has to decide which 16 players that he’ll send out on opening night. You know he’s been keeping an eye out on other teams cuts tonight in hopes of seeing one of his “guys” hit the waiver wire. Hinkie has the option to send two of his players on the roster to the D-League as well as option any three of the guys he’s cut so far to the D-League while still retaining the rights to those players.

I could see this happening to a guy like Blue, but it’s probably a reach for someone like White or Wyatt at this point. Hopefully Hinkie can give new meaning to Andrew Bynum’s famous “pressure makes diamonds” speech before last season began. The ball’s in his court and he’s continuing to lay down the law at any chance he can get.

Jeff McMenamin is a scribe for Philadunkia.