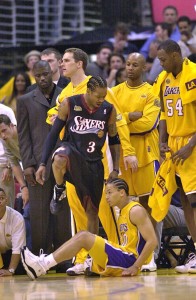 There was the hard-hitting but well-spoken Brian Dawkins of the Eagles, that truly left everything he had out on the football field on Sunday’s.  He set the tone on defense for a team which reached the Super Bowl in 2004.

There’s the great Chase Utley of the Phillies.

He helped win the city its first major sports title after a 25-year drought and defines the word toughness on the baseball field.

Then there was the great Eric Lindros for the Flyers.  He led the team to a Stanley Cup in 1997, before they were ousted in four games by the Detroit Red Wings. He was a scoring machine who is already in conversation to become an NHL Hall of Famer, just a few years out of the league.

RT @LaurenMRosen: It’s been a great season for #content But I believe the hydration content hasn’t gotten enough love So as the final thi…
h J R
philadunkia

RT @Ky_Carlin: Al Horford says he’s been given the he indication that he’ll continue to come off the bench. He adds that it’s best for the…
h J R
Follow philadunkia