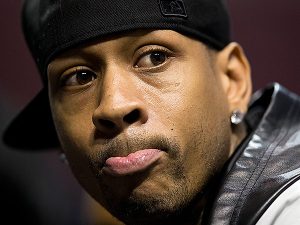 In front of a crowd of reporters at the Wells Fargo Center today, Allen Iverson finally closed the book on his basketball career. It was a decision which had taken Iverson three years of contemplation, before he finally decided what he believes is the best route for him and his family at this stage of his life.

Iverson statistically is one of the most decorated Sixers players of all time and — like LeBron James stated earlier this week — is likely the best pound-for-pound basketball player to ever play the game.

He was the 2001 NBA MVP and an 11-time All-Star. He won four NBA scoring titles, three steals titles, was a part of three NBA First Team’s and Second Team’s and won the 1997 NBA Rookie of the Year Award.

Hall of Famer Julius Erving and legendary coach John Thompson (who coached Iverson at Georgetown), attended the news conference along with his mother, Ann, and former Sixer Theo Ratliff who is a close friend and former teammate to Iverson.

Iverson took time to reflect on his career and the challenges he faced being under the spotlight on a daily basis.

“In this profession, you have no idea how hard it is to live up to all of the expectations and to be a perfect man even though you know you’re not,” said Iverson. “My career was up and down at times, I made a lot of mistakes and there were a lot of things that I’m not proud of, but it’s only for other people to learn from them… I really thought that this day would be a tough day for me, but it’s a happy day… I gave everything I had to basketball. The passion to play is still there, but the desire is just not.”

An announcement is expected to be made during tonight’s Sixers game against the Heat regarding Iverson’s retirement announcement along with a small commemorative ceremony. The Sixers are also expected to retire Iverson’s No. 3 in a seperate ceremony later this year.

No athlete in Philadelphia has ever had such a close and personal relationship with the fans quite like Iverson has during their time in the city. Iverson touched on this during the presser as well.

“It’s home (Philadelphia). I’ve been a part of this community for so many years. They grew on me, like I grew on them… These fans are me and I am Philadelphia. When you think of Philadelphia basketball, you think of Allen Iverson and I fought for that. I earned that.”

Late in the presser, Iverson discussed his infamous practice rant during the 2002 playoffs. To this day, Iverson is still ridiculed by the media for the way in which he handled himself during the interview — saying the word “practice” an astounding 22 times.

“It wasn’t just about that I didn’t like practice or care about practice or anything like that,” Iverson said. “If I could go back and do it all over again, I would never have done the interview. As far as how I expressed practice, practice, practice over and over again, I wouldn’t take that back. That sound bite — because it’s great for the media and great for the fans, they love it — but they had no idea my best friend just got killed. They had no idea that press conference wasn’t about practice, it was about me not being traded from Philadelphia. That’s what I thought I was at that podium to talk about.”

Contrary to that presser, Iverson for the most part kept his cool this time around, until of course the very last question. Iverson was asked if there were any of his teammates had helped him get to where he is today, which was when Iverson tearfully expressed his appreciation for his former teammate Aaron McKie.

“He was my teammate, but (our relationship) was on another level,” said Iverson. “He helped me with a lot of personal issues that I had and it was different then just being a teammate. I love a lot of guys that I played with and I’m always going to love them, but when it came to Aaron McKie it was more than just basketball.”

The scene was a great one down at the Wells Fargo Center and an immense moment for the Sixers franchise. “The Answer” left fans with one more moment (in a novel size book) to remember him by. Fans loved him for not only his talent on the court, but his connection with the fans and people he’d come in contact with. Five years from now, just like Dr. J, we’ll be celebrating his enshrinement into the Hall of Fame. He’s earned it.