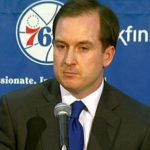 It’s 7:15 am and Sam Hinkie has just arrived at the Penrose Diner.

I’ve already been there for fifteen minutes.

He looks around and pulls out his phone.

I stride up to him and introduce myself.

First impressions are an important thing and given the chance to make one, I do.

When Sam and I are alone, I’ve made the conscious decision to ask questions he doesn’t expect and then evaluate what his answers really mean.  The five other bloggers that have yet to arrive can ask the mundane questions.  Sam is going to be cryptic and I’m going to do all that I can to crack the code.  What you’ll be reading about the meeting with Sam is part what he said and part my evaluation of what he did or didn’t say…

The Rockets are viewed as the “analytical team” of the NBA.  So what is our new GM bringing with him?  Hinkie has had the Sixers players  linked up to sensors made by catapult sports from the very first practice.  SportVU was introduced to the NBA years ago, and Sam Hinkie was there for that.  His new head coach was part of the San Antonio Spurs, who are likely the real leader in NBA analytics.  Aaron Barzilai, creator of Basketball Value, is still with the team after being kept in a dark room last year for fear that he’d come in contact with DC and unintentionally cause a non-ritual suicide.

Brett Brown is the coach of the 76ers now and for the foreseeable future.   Sam didn’t view the hiring of Brown on a timeline like everyone else.  He took his time and evaluated everything that he felt necessary.  Just like getting married, this is something that you need to view the big picture.  Brett Brown was his big picture guy.  Working for the Spurs and coaching in FIBA was far more important than anything Brown did with the Australian Institute of Sport.  Brett Brown is Hinkie’s choice through and through.

Making the best decision with the available information.  That is all Sam wants to do.  Looking at today, tomorrow, next year and the next decade for how things can play out is necessary.  Things are going to happen and as a GM, you’ve got to be able to react.  The ability to evaluate what others are going to do is also an important thing.  That point was made after I talked about the value of the Jrue trade, specifically New Orleans’ future 1st rd pick.  I surmised that while Sam assessed a certain value to that pick on Draft night, he projected that New Orleans would do things to actually make the pick more valuable instead of less valuable during the off-season.

The Draft is a lot about luck but every year teams are getting better.  People underestimate how what looks to be a small edge, might really be a huge edge.  The end result of things is obviously important, but there is a lot that can’t be controlled.  What Sam Hinkie wants to control is making what he views as the decision that gives the most opportunity for success at every turn.  Continue to make the best decisions and things will eventually work out.

My first question as part of the entire group was about why Thomas Robinson isn’t in a 76er uniform?  So it came as a surprise that after Sam praised T-Rob in his time with the Rockets and thought he had a bright future, that he said “Houston wanted a lot for him”.

My suspicions are confirmed about how Sam is going to answer questions today.  I know this because T-Rob was traded by the Rockets this off-season for two future 2nd rd picks, and a young Greek guy (Kostas Papanikolaou).  There was another guy part of the trade (Marko Todorovic), but there was nothing really about him on Google except a soccer player and a Serbian war criminal by the same name.

Not exactly what anyone would consider “a lot”.

Earlier when it was just Sam and I, Thad Young was obviously brought up.  Sam told me about seeing Thad in high school, college and in the NBA and thinking very highly of him.  He even cited the 2006 Jordan Classic high school all-star game with Kevin Durant and Ty Lawson, where he was very “impressed” by Thad (Editor’s note: Thad had 28 & 13 and was the MVP for his team in that game.).

Sam has “high hopes” for him this year and beyond.  When I talked about expecting a much larger role in the offense, he did nothing to dissuade me from that train of thought in his response.  In my opinion, if Thad doesn’t take a step forward this season, he will not be a 76er at year’s end.

Questions about the mid-range were an obvious topic, for reasons unbeknownst to me.  Sam made it clear that he and Brett Brown were very conscious about improving the teams shot selection.  I made a point about how having an elite mid-range shooter like Dirk or KG was such a huge advantage because of how it forces teams to defend on three levels instead of teams concentrating on just 3pt and rim defense.  In a perfect world, you’d only score at the rim, from 3pt and free throws but that’s not possible.  The mid-range is a unfortunate but necessary part of the game.

All I got out of Sam in response was, “Yeah, those would be nice players to have.”

Injuries are part of the game.  Nerlens Noel needs to get healthy.  Whether he plays this year or not, isn’t something that Sam appears concerned about.  He wants him to get acclimated to the life of a professional basketball player.  Practice, watching tape, travel and everything that comes with the job he has.

Apparently, Arnett Moultrie’s rehab is going “well” on the ankle but maybe not well enough.  When I pressed about whether his 3rd year option was going to be picked up, Sam’s response was that the decision needs to be “finalized with the next few days”.  By reading Sam’s facial expressions and general reaction to that question I don’t think that Arnett will get his 3rd year option picked up.

The pipeline effect is something I asked about.  Syracuse doesn’t exactly have a storied history with point guards. Even ‘Cuse “legends” like McNamara, Flynn and Jardine weren’t NBA players.  So, was there any concern that MCW was coming from that same pipeline and that might he be destined to fail.  Hinkie explained that he views each player as it’s own variable.  What came to pass before, doesn’t mean that will continue.  There was “a reason” that MCW was drafted with the 11th pick (We saw some of those reasons last night vs. MIA.).  Hinkie is concerned with the big picture and he views the future of MCW as a more important part of the big picture than the present.

Sam Hinkie has a vision for the future.  That was evident by his roster shakeup on Draft night.  He has an idea for the short and long term of how he wants things to be.  Not everything is going to go right, but that is to be expected.  Everyone in the organization is part of a machine and it’s paramount that all the parts work together.  Each decision is an opportunity to improve.

The goal Sam has is clear, win an NBA championship.  Everything he does is about that goal.

Steve Toll is a scribe for Philadunkia.com.