Where is the perimeter defense? This is something I’ve had to ask myself all season long for the Sixers who look dumbfounded when it comes to their job of guarding the 3-ball. There have been countless times during the regular season where the lack of perimeter defense has led to a Sixer loss.

Against the three best three-point shooting teams in the League, the Sixers have come away with just one win in nine tries. The Celtics, Cavs, and Spurs have all left the Sixers befuddled this year from beyond the arc and the problem for the Sixers is that they will most likely have to go through two of these teams in order to make it to the NBA Finals.

In the Sixers four losses to Boston this season, two of them can be blamed on perimeter defense. On February 3rd, the Sixers held a 99-97 lead over the Celtics with 7 seconds to go. Just minutes before, Ray Allen hit a game tying three for the Celtics to make the game 97-97. On that play Andre Miller was supposed to be guarding Ray Allen but he got hit with a screen and by the time Reggie Evans came overtop to help, Allen’s shot was already leaving his hands. With only 7 seconds left in the game and the Sixers only up by two the last thing they needed to do was let Allen get off another good look at a three. Instead the play ran like this: Thaddeus Young was guarding Ray Allen who took the inbound pass, Allen than passed the ball off to Paul Pierce who drew Thaddeus Young over on a double team and left Ray Allen wide open in the corner. Pierce noticed this right away, threw the ball to Allen, and it was game over for the Sixers after Allen made the shot with ease.

Sixers players have to stick to their men on defense in situations like those. You have to trust that Iguodala can make that stop on his own at the end of the game instead of doubling Pierce and leaving your man open. The Sixers too often leave their man to double, only to get burnt by a wide open three.

Against the second best team in perimeter shooting, the Cavaliers, the Sixers lost a must win game on April 10th due to the double team. Lebron James every time down court would draw a double team and just kick it out to wide open shooters from three-point range all night. The Cavs shot 12-23 from beyond, and the Sixers lost 102-92. Once again here is a situation like in Boston where you have to trust that Iguodala can guard the star player without help. If Iguodala is as good of a defender as he’s made out to be than at some point you have to let him go out and play defense on his own. The only reason why other teams double Iguodala so much is because they know the Sixers can’t hit three’s. Against the Cavs who are a team you know can knock down three’s, doubling Lebron is not a smart move.

Then there was the January 3rd debacle against the San Antonio Spurs. In a game the Sixers should have won, they let the Spurs shoot 15-26 from deep which kept them in the game and got them a last shot at the end of the game to win. Roger Mason and Michael Finley went a combined 9-11 from three, and on every defensive collapse on Parker/Ginobli/Duncan in the lane they found themselves wide open from deep.

These are just a few examples from the season that stuck out, but there have been plenty of other games which could have been Sixer wins if they had defended the 3-ball the correct way. The Sixers match up on Sunday to start the playoffs against one of the best three-point shooting teams in the league, the Orlando Magic.

The Magic are a team who outside of the consistent play of Dwight Howard, rely mostly on their ability to knock down three’s to win them games. In the Magic’s 59 games won this season they knocked down 630 treys shooting 40 percent. In the 23 games lost, they only made 187 from downtown and shot a measly 31 percent. These numbers really tell you something about how the Magic really live and die by the three-point line. No matter how effective Dwight Howard is on the court, he can’t single handedly win a basketball game. Rashard Lewis, Hedo Turkoglu, and Rafer Alston can each get you five three’s on any given night, while Courtney Lee, Mickael Pietrus, and J.J. Reddick aren’t too bad either. 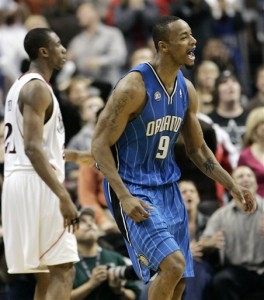 What the Sixers need to do in order to win, is to make sure Rashard Lewis is in check all night from deep even if that means giving up a couple of inches. Iguodala should guard Lewis simply because he is the Sixers best defender and Lewis poses as the Sixers 2nd biggest threat. Royal Ivey should get the start over Willie Green, and his duty should be to guard Hedo Turkoglu the best he can. As for the two spot, Courtney Lee doesn’t really impress me so unless he starts hitting all of his shots this is where Thaddeus Young and Sammy D can double team Dwight Howard down low and keep the Magic’s biggest threat in check all game. Finally I think that Andre Miller should be able to defend Rafaer Alston well. Miller is a great perimeter defender and come playoff time Miller just simply doesn’t mess around.

The Sixers have lost in all three contests they’ve played against the Magic this season, and they need to look back to their game they played back on November 26th if they want to find out the answer on how to beat the Magic. In that game the Sixers lost 96-94 but they kept the Magic shooters in check (outside of Rashard Lewis who went 5-10 from beyond). The reason why the Sixers ended up losing was not because Dwight Howard had 21 points and 14 rebounds, but Tony Battie off the bench went 9-9 shooting from the floor to end the game with 20 points! That killed the Sixers, who should be up to the task of taking Tony Battie out of a game. Battie scored four times his average that night, and half of that would have gotten the Sixers a win. The Sixers should stick to the double team on Howard unless either Lee or Battie start doing major damage. Thaddeus can let up on Howard a little if Lee gets hot, and Reggie Evans can put a body on Battie if he gets thrown into the mix.

Keeping the surrounding cast to Howard quiet is the key to beating the Magic. Like the Phillies did against Manny Ramirez and the Dodgers in the NLCS back in October, if you can shut down a star players surrounding cast than it doesn’t matter how much he produces because his team will come up short. That is the mindset the Sixers have to go into this series with because if not than their season will be over in a flash of Magic.