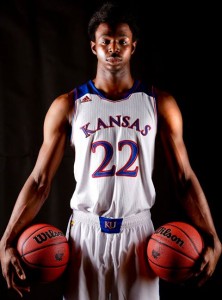 “He’s got to take everyone’s best shot every night and I didn’t think he really brought it.”

That line was uttered by Kansas head coach Bill Self following a brief benching of Andrew Wiggins Tuesday night in KUs’ final preseason game vs. Fort Hays State.  Wiggins being benched may incite a fair amount of over reaction in the basketball world, especially among the Kansas faithful, but in reality it isn’t a big deal in the long run.

Whether it’s a freshman in the NCAA or a rookie in the NBA, first year players in a new level of basketball are going to make mistakes.  As far as this benching goes, it was in the preseason and wasn’t an attitude related problem so I really don’t see the need for concern here.  Self knows that everything he does with Wiggins will be put under a microscope and perhaps that’s why he recently made Wiggins un available to the media in a “Johnny Football” like fashion.

Wiggins has to deal with more press and interviews than any player since LeBron James entered the league.  Wiggins even came to his head coach recently and was quoted “Coach, why do I have to do this?”.

Self undoubtedly knows the freshmen will be stressed out all season with this and perhaps the benching was simply a move to make Wiggins more conscientious of his basketball game rather than his fame.  The coaching ploy by self may come at an opportune time with the showcase match-up with Duke rapidly approaching.  All of this being said, first time offenders typically get a pass.

In fact, Self did not seem overly upset about the situation when you examine his quote as a whole ,“If you watch the game, early on he didn’t seem as engaged as he should be, and when he came back in he had an opportunity to dunk and he didn’t run.  He just didn’t run so I subbed him back out.  He played about 30 seconds.  He sat over there for quite a while.  I love the kid, but he’s got to take everyone’s best shot every night and I didn’t think he really brought it until he got back in the game after that and he was much more aggressive.”

However, if this happens again then a much higher level of concern may be warranted by Kansas and Sixers fans alike.