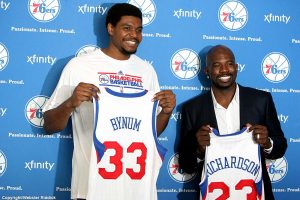 In the wake of Andrew Bynum possibly taking the court tonight for the Cleveland Cavaliers down at the Wells Fargo Center, it’s a good time to look back and reflect on one of the biggest Sixers trades in the past 20 years.

It was just two summers ago in August when the Sixers shipped out Andre Iguodala, Nikola Vucevic, Moe Harkless and a protected first-round pick in return for the possible franchise-center Andrew Bynum and Jason Richardson.

Both Bynum and Iguodala were coming off 2011-12 All-Star seasons at the time. Bynum averaged 18.7 points, 11.8 rebounds and 1.9 blocks on 55-percent shooting for his only All-Star season. Iguodala averaged 12.4 points, 6.1 rebounds, 5.5 assists and 1.7 steals on his way to his only All-Star season as well. To many it seemed like the swapping of need positions in order to further the success of each franchise involved. Obviously that didn’t become the case — Bynum went on to miss the entire 2012-13 season and the Sixers had to bite the bullet and start on yet another rebuilding process in the offseason.

But digging into the trade further brings about many questions. How has the trade shaped the Sixers’ current franchise since then? Are the Sixers better or worse off for the future? How could things have been different if the trade never happened?

These are just a few of the topics that I’ll dive into after the jump…
Andre Iguodala had to go: 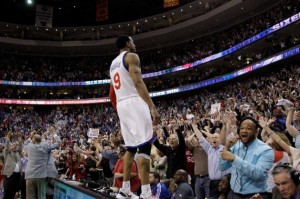 Make no mistake about it, the Sixers needed to get rid of Andre Iguodala last summer. For years Iguodala had been at the center of trade conversations in Philadelphia and after an All-Star year and an Olympic Gold medal the Sixers ownership knew that this was the time to pull the trigger. I’m sure that many teams were calling into the Sixers offices two summers ago in the hopes of landing Iguodala, and the ownership obviously thought that (outside of getting Dwight Howard) Andrew Bynum was the best player they were offered in return.

Tom Moore of PhillyBurbs.com reported in July of 2012 that phones were ringing off the hook for deals involving Andre Iguodala and Moe Harkless. The top teams trying to land Iguodala at the time were the Nuggets, Warriors, Timberwolves and Trailblazers.

It’s interesting to think about who the Sixers could’ve landed from each of these teams had they not tried to involve themselves in the four-team deal for Bynum. Could Steph Curry be a Sixer today? Or was it David Lee and Andrew Bogut who the Warriors were offering? Did the Nuggets plan on shipping over Nene or Kenneth Faried? Or how about Timberwolves and Trailblazers? Were (the more unlikely) Kevin Love or LaMarcus Aldridge on their way to Philly?

The Sixers were desperately looking for a dominant big while also retaining Jrue Holiday. Had Holiday not been valued so highly by Sixers ownership at the time, it’s interesting to think about the possibilities of who could’ve been packing their bags for Philadelphia instead of Bynum last summer.

What if the Sixers had held onto Nikola Vucevic and Moe Harkless? 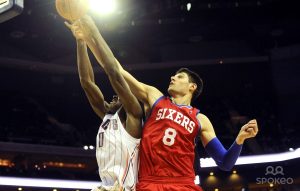 Forget Andre Iguodala for a second. How much has this part of the big trade bitten the Sixers in the ass in the year which followed the Bynum trade?

Vucevic has turned into an absolute stud in Orlando, while Harkless continues to show growth as well and still has plenty of untapped potential. Vucevic averaged 13.1 points, 11.9 rebounds, 1.9 assists and 1.0 block last season for the Magic. This season he’s averaging 17.8 points, 13.2 rebounds, 2.6 assists and 1.2 blocks, while having healthy games of 22 points and 16 rebounds against the Timberwolves earlier this year and 30 points and 21 rebounds Wednesday against the Clippers.

Can you imagine him on the blocks in place of Spencer Hawes this season?

Even seeing Moe Harkless play makes me wish I could act like Marty McFly for a day to travel back in time and veto this trade from happening. Harkless is averaging 10.4 points a game this season, but seems to be developing well and would certainly be a step up from James Anderson at the shooting guard spot for the Sixers.

Is there any positives the Sixers can take from letting these guys go?

I believe even with Vucevic and Harkless last season, the Sixers probably still would’ve ended the season close to where they did in terms of a record standpoint. It obviously depends on what they could’ve gotten in return for Iguodala, but their record probably still would’ve led to the resigning of Doug Collins as well as Sam Hinkie and Brett Brown coming to town.

The thing that bothers me is what would’ve happened differently in the 2013 offseason.

Now you’re looking at a lineup of…

That has the makings of a very stacked young team down the road. Hinkie’s first move as GM was trading Jrue, so it seems as if that trade was probable of happening regardless of if the Sixers had Vucevic or not. 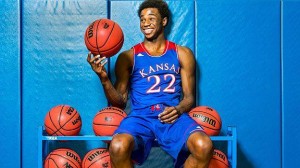 If you somehow deal Turner and Young before the deadline this year, the Sixers could still conceivably lose enough games to get a 25-percent shot at Andrew Wiggins and likely an extra lottery pick from New Orleans.

This is all hypothetical, but it makes me sick to my stomach sometimes to think about how things could’ve gone differently with just a little extra thinking — or in other words —If Sam Hinkie had become GM two summers ago before the Bynum fiasco went down.

The Sixers are obviously worse off now than they would’ve been if the trade had never happened, but with some luck could recover and steer themselves right back on track towards relevance again.

When Andrew Bynum enters the Wells Fargo Center tonight, don’t think of him as a player who let you down, but think of him more as a symbol. For better or worse he single-handily changed the Sixers franchise and if Andrew Wiggins steps on the podium as the No. 1 pick next June holding a Sixers jersey than he’ll be nothing more than a distant memory. Injuries happen in sports and unfortunately franchises are placed on the losing end sometimes. Wouldn’t you rather be a Sixers fan today then a Trailblazers fan who suffered through so many more cases of career-ending injuries throughout their history?

If the Bynum trade never happened we wouldn’t have Hinkie-palooza, #WinlessforWiggins or Team WHOP this offseason. Use tonight to close the book and embark on a new one. There’s plenty of new storylines on the horizon.