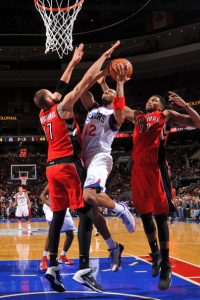 Anyone who’s ever played basketball in their lifetime knows the importance of getting to the charity stripe. On any basketball team, more often than not the best player on your team will also be the one that makes and attempts the most free throws. This is the mark of a true scorer.

For the Sixers, getting to the line has been a crutch for this team since 2007, the year Allen Iverson (the franchise’s second all-time leading scorer) was traded to the Denver Nuggets.

In the seasons following Iverson’s departure, the Sixers as a team have only ranked in the top 10 in free throws made for a full season just once — in 2008-09 when they ranked sixth. Otherwise, the Sixers have ranked in the bottom-half of the League in terms of hitting and attempting their freebies since then. Until of course — this season.

I created a chart which maps the Sixers’ League ranking in free throws made and attempted as well as FT/FGA (a stat which measures how many free throws the Sixers take per field goals attempted) from Iverson’s last full season with the team up to this season.

Evan Turner ranks 10th in the NBA with 71 free throws made, Michael Carter-Williams ranks 43rd with 41 made (while missing four games due to injury), Tony Wroten comes in 71st with 30 made, while Spencer Hawes rounds out the rest of the top 100 for the Sixers with 29 made (78th).

Before digging into what this means for this team and the team’s future under Brett Brown, let’s take a look at where Sixers players ranked amongst the NBA’s elite in free throws made last season. I’ll only show the top four on the team – like I just showed for this season.

Now lets project the current Sixers’ numbers at their current rate for the entire 2013-14 campaign and see how the numbers compare to last season.

What does this mean for the Sixers? Well for one…That’s 925 FTM by the top four performers on the season compared to 566 made last season – an astounding 359 point difference. This is also leaving out Thaddeus Young who, judging by last season, should make over 100 free throws by years end as well. Obviously health and fatigue will serve as major factors in these numbers, but if this team can stay healthy and continue to play at the pace they’ve been playing this could cause major problems in terms of tanking as the season moves forward.

The Sixers’ biggest advantage over other teams at the moment is their quickness and the size of their guards. If Turner (who basically plays like a point guard), Carter-Williams and Wroten keep attacking the rim at this pace…Eventually they’ll wear down their opposition and/or draw enough fouls for teams’ subs to get extended minutes. Opposing bigs will have to help on the perimeter, which will open up the paint to Spencer Hawes and Thaddeus Young, who’re both more than capable of putting up big numbers in the scoring column.

Some of you may believe that the winning ways of the Sixers have now ceased in their current five out of six game skid, but don’t let the losses fool you. Of the teams who rank in the top 10 in FTM, eight of the 10 teams are currently in playoff position — including the Sixers. The combined record of those teams is 77-61 (56-percent). This isn’t a good sign for #Tankadelphia.

The worst record of the teams which round out the top 10 are the 3-10 Brooklyn Nets, who we all know will be in playoff contention in the East by the end of the season.

If the Sixers can stay fully healthy, I expect the team to make a similar amount of free throws as you’ve seen so far this season. I also expect their defensive schemes/philosophy to change with each passing week. Some of the close Sixers losses you’ve seen in recent weeks will likely turn into close wins.

One of the main things Brett Brown has preached all season is fitness and durability. This is going to make or break the Sixers’ second-half of the season (as well as possible returns from Nerlens Noel, Arnett Moultrie and Jason Richardson), but if the team can out-endure other teams in the second-half of the season, than their pace should overtake many of the older teams in the league.

Barring a trade of Evan Turner, Spencer Hawes or Thaddeus Young – this Sixers team could hover in the 30-40 win range…Rather than the early sub-20 predictions by experts including us here at Philadunkia.

You could say that this is all speculation and that it doesn’t prove anything. For example, the Bobcats placed fourth in FTM last season but only wound up with 21 wins and the second-worst record in the NBA. But once again, of the top 10 teams in FTM at the end of last season, five of the 10 teams made the playoffs in their respective leagues. The teams that failed to held a combined record of 157-253 (38-percent). If the Sixers won 38-percent of their games this season, they’d win 31 games. 31 wins was tied for the ninth-worst record in basketball last season. That’s not going to cut it for the Sixers.

The Sixers currently are being out-scored by 5.7 PPG which ranks 25th in the League. They’re also giving up more points (109.3 PPG) than any other team in the League. By seasons end last year, the Bobcats were giving up a league-worst 102.7 PPG. What would happen if the Sixers were able to close their opponents’ per game scoring average by 7.0 PPG?

This is what worries me the most. The Sixers aren’t your average lottery team and they’ve already shown that this year. If they can continue to get to the line, increase their intensity on defense and make teams exhausted towards the end of games then the franchise could be in big trouble heading into the offseason. It’s becoming more and more evident that a trade must be made before it’s too late.

Jeff McMenamin is a contributing scribe for Philadunkia.