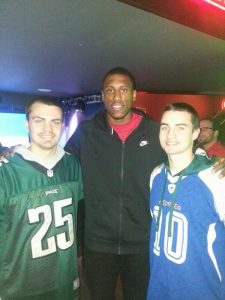 On Sunday, just a few blocks from the Eagles’ Snow Bowl down at Lincoln Financial Field, Sixers star Thaddeus Young held his 5th Annual Thad-A-Claus charity event at Chickie’s and Pete’s down in South Philadelphia.

The event was a sell-out this year (in the Play 2 portion of the restaurant) as kids of all ages filed in for autographs and pictures with their favorite Sixers players.

Other notable Sixers in attendance were Jason Richardson, Hollis Thompson, Lavoy Allen and Daniel Orton among others. As the event was wrapping up, even Sixers coach Brett Brown made an appearance to support the good cause.

Young was delighted at the turnout and support shown to his Young For Youth Foundation, an organization which helps at-risk youth. A large donation was given to the Ronald McDonald House Charities following the event.

“Each and every year it’s gotten bigger and better,” said Young. “The kids are still really enjoying it and hopefully it can keep growing. We don’t want it to get so big that kids are left out in the snow or anything like that (laugh), but we want to get as much donations as we can to the Young For Youth Foundation charities such as the Ronald McDonald House.

“Most of the Ronald McDonald kids were too sick to come today so we’re really holding this in their honor.”

Young’s other goal was to connect with the fans that come out in support of him on a nightly basis.

“I love doing events like this,” said Young. “At these events I’m able to show my appreciation for the fans that pack the house for me every night and buy my jersey and stuff like that. It’s definitely a good feeling to be here today. Even in the snow these people still came out to support me and my charity.”

Jason Richardson, decked out in full Lions attire, was happy to support his teammate as well as avoid some of the harsh Eagles fans before he made his way over to the Linc for the game.

“It’s always fun (attending these events),” said Richardson. “This is cool what he’s doing in terms of giving back to the community. It shows that he cares. I was at this event last year and this year it got a lot bigger, so it’s great to see things like that. When guys are doing things for the kids in the community, I’m always trying to come out in support.” 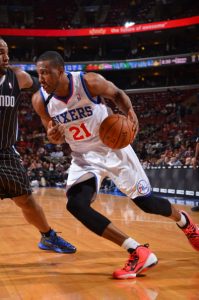 Aside from the event, Young also discussed the state of the Sixers as they currently stand and his recent hot streak.

Since his return to the team following a death in his family, Young’s played at an elite level. In the past nine games, he’s averaged 18.4 points and 6.2 rebounds while shooting nearly 48-percent from the field.

He attributed the jump in his play to an increase in his aggressiveness on the court.

“I’ve just been focusing on being more aggressive and keeping up that intensity for the entire 48 minutes,” said Young. “Before I think I was kind of getting comfortable on the offensive side of the ball, now I’m really trying to attack. I’m playing how I wanted to be playing to start the season.”

Offense has been a bright spot for the Sixers this season. They’re averaging 102 points per game, good for 11th in the League. It’s their defense that needs a ton of work if the team has any shot at competing the rest of the season. The team is giving up 109.5 per game which puts them in dead last. The next-worst team is the Lakers, giving up 103 per game. Young discussed this issue as well.

“We kind of knew that we’d lose some of our intensity on the defensive side of the ball this year,” said Young. “When you’re not playing that half-court style (offense), it tires you out and your defense sometimes slips a little bit as the game wears on. I think as the season progresses you’ll see us get a better grasp on transition defense and pick up the intensity more. We just have to learn how to stop the ball faster and force teams to play slower against us.”

Last night against the Clippers, the Sixers broke a streak of nine-straight games of giving up over 100 points — they fell 94-83. It was just the third time this season that the Sixers were able to hold an opponent below the century mark.

Young isn’t worried about wins and losses however, he’s thinking about growth. Last night’s game is yet another example of this team growing and coming together. Holding an opponent 15 points below their season average is a positive sign.

“Our record might not show it, but we’re playing hard and fighting in each and every game,” said Young. “As long as we continue to get these young guys better and continue with our plan of restructuring the organization I think we’ll be fine. Fans will have to continue to be patient, but at the end of the day it’s about getting the right group of guys together on this team and being able to change the culture for the future.”

Jason Richardson appeared at Sunday’s event head-to-toe in Lions gear. He explained he was a fan since childhood and discussed an experience he had with a fan earlier in the day.

“I grew up a Lions fan so I’m obviously wearing their colors today,” said Richardson. “I’ll be watching the game in the snow later just like everybody else… I was actually at the grocery store earlier this morning and someone came up to me and said, ‘hey man, you’ve got the wrong colors on,’ but then he realized who I was and kind of calmed down a bit. He understood and just let me get back to my business, but I expect a lot worse in the stadium.”

Richardson also discussed his rehab and his thoughts on the possibility of him starting again at shooting guard if he is indeed healthy and ready to go.

“It’s coming along,” said Richardson. “It’s a slow process and I’m just trying to stay positive and stay in the best shape that I can. I’m just trying to be a leader for the guys while I’m out and be that vet that this team needs right now…Right off the bat I know I’m not going to be able to start right when I get back. Hollis (Thompson) and James (Anderson) have done a great job so far this season at that spot and I’m just looking to progress and be fully healthy before I can think about starting again. They’ve done a great job at the shooting guard by committee right now and I’m happy for them.”

Jeff McMenamin is a contributing scribe for Philadunkia.