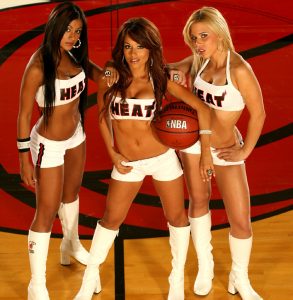 This 2013-14 opening day edition of “Fo’ with the Foes” – Philadunkia’s advanced scouting series which with the help of an accomplished journalist from around the NBA beat or blog world, previews key upcoming 76ers games – features tonight’s opponent, the Miami Heat who are not playing like two time defending NBA Champions right now and thus are experiencing a 3-game losing skid right.

After the jump, I’ll look a Fo’ key items for tonight’s game.  Additionally, we’ll get a little more insight into the Heat team the Sixers face tonight from our man Wes Goldberg at AllUCanHeat.com as Wes will answer Fo’ questions on the Heat from us here at Philadunkia.

1)  Get Thad Going:  I know I sound like a broken record on this topic, but Thad’s production is down right now (11 ppg. in last 4 runs) and that’s not good for winning games or his trade value.  Hopefully the GWing three ball he drained against Charlotte will reignite his scoring touch, but just to make sure he gets back to that 17-20 point range tonight I’d like to see Brown get Thad some touches early. Let’s put MCW and Thad in a few pick-n-roll situations in the 1st Q and see if we can get #21 some easy looks.

2)  Avoid the Early KO Punch:  I think Miami was embarrassed by the loss to Washington the other night.  Additionally, the Heat in general and specifically how good they are right now is being questioned by every NBA “expert”.  In short, I think Lebron & Co. are pissed off and will come out playing angry tonight as they look to show the League and media that reports of their demise are vastly over blown. Thus, the Sixers need to play steady basketball early and keep this one as close as possible during an opening quarter that is sure to be played at a very emotional and intense level by the Heat.

3)  Turnovers:  I’m looking for the Sixers to cut back on their turnovers tonight, especially early on.  Over their last 5 games the 7-6 are averaging 17.4 per night and they have cracked the 20 turnover plateau 3 times in those 5 games.  If they want any chance of staying competitive tonight, the 76ers have to value the basketball (I’m looking at you TWroe!).

4)  Contest the 3-Ball:  During their 3-game losing streak he Heat have been ice cold from behind the arc — 20-69 (28.9%).  Leading the brick brigade for Miami has been none other than Jesus Shuttlesworth himself, Ray Allen.  The HOF shooting guard is 1-12 from deep and 3 of 23 from the field during Miami’s skid.  The Heat have no inside presence, so I want the Sixers to get on the perimeter and closely defend the struggling Miami shooters.  I know it’s a big ask, but a guy can dream.  Hopefully with a little extra pressure from the Sixers D, the Heat’s poor shooting will continue tonight.

Q&A with Wes Goldberg at AllUCanHeat.com…

Philadunkia:  The national media is analyzing the hell out of the Heat’s recent “struggles”.  What do you make of the 3-game losing streak?

Wes Goldberg at Allucanheat.com:  In the first two games against the New York teams, the Heat just weren’t into it.  Against the Wizards Wednesday night, however, they were putting in the effort but the shots just weren’t going in. Ironically, you may be able to chalk that up to the four-days of rest.  The losses to bad teams are bothersome, but the Heat are also a league-best 11-2 against teams better than .500.  When the Heat are engaged, they are still the best team in the NBA.  They will be okay when the playoffs come around.

Philadunkia:  Against the Wiz, the Miami defense was not good and according to ESPN Stats & Info…“Since their last meeting with Indiana on December 18th they have the worst field goal percentage defense in the NBA and 5th-worst defensive efficiency. Their defense ranked 6th in efficiency during their first 26 games.”  Can you pinpoint one or two of the ills that are having such a negative impact of the Heat’s defense?

Wes Goldberg at Allucanheat.com:  As aggravated as the Heat’s defense can be, I have given this a lot of thought.  Here is my hypothesis: When teams like the Spurs, Thunder or Pacers coast, they can still play organically good defense due to their personnel.  Those teams still have true centers and shot-blockers who, regardless of effort, are still big and carry the rim-protector reputation.  That keeps opponents from driving and getting easy shots.  If Roy Hibbert doesn’t show up one night, he is still 7-foot-2 and can block a shot just by being him.  The Heat have no such player, and the nature of their defense–blitzing screens, helping on defense and closing out on open shooters– is  averse to coasting.

Philadunkia:  On paper, the Heat should win this game going away, but is there anything that worries about this match-up with the Sixers tonight?

Wes Goldberg at Allucanheat.com:  Maybe coasting isn’t the right word for what the Heat are doing.  Maybe we should say “going with the flow” because Miami is rising and falling with the tide of its opponents.  They play to their competition.  However, no team, even a coasting one, likes losing streaks.  I think they get up and get off the schnoz.

Philadunkia:  A huge deal is being made of Greg Oden’s run vs. the Wizards (8 minutes, 24 seconds and made a pair of dunks).  I understand it is exciting that Oden played his first game in more than four years Wednesday night, but are you really expecting him to contribute this season or in the playoffs?

Wes Goldberg at Allucanheat.com:  Those minutes were a treat for Oden.  A bone for a guy who has been working since 2009 to get back into a regular season game. He played well in limited minutes, but we don’t know what is going on behind the scenes.  Did Oden’s knee swell after the game?  How is he feeling today? Unfortunately, we don’t have access to this information and the Heat have been tighter than a pickle jar regarding Oden’s progression.  However, little nuggets like what we saw against the Wizards can only be a good sign.  I don’t expect him to be a factor in the regular season but see him playing gradually in the playoffs.  I think of it this way: The first two rounds of the playoffs will be his preseason and the Eastern Conference Finals vs the Indiana Pacers will be his regular season.  The Heat don’t want Oden’s regular season to last seven games, either.

Thanks to Wes for his time and answers.