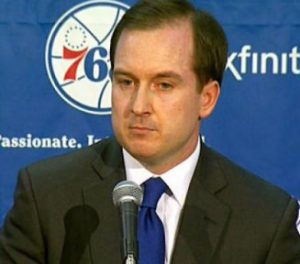 The swirling trade rumors haven’t let up regarding the Sixers’ big three as we’re now just a little over 24 hours away from the February 20th, 3PM trade deadline.

Last night’s matchup against the Cavaliers could have been the last time we see the Sixers’ core veterans on the same court together.  Evan Turner, Spencer Hawes and Thaddeus Young, could have played their last game for an organization that they’ve given their blood, sweat and tears to for the past 4-7 years.

All eyes are on Sam Hinkie to try and make something happen, but it’s rumored that his asking price has been way too high for potential suitors, including the San Antonio Spurs.

One of the recent rumors that’s surfaced involves the Sixers shipping Thaddeus Young or Evan Turner to the Spurs for a combination of Boris Diaw, Matt Bonner, a player TBD and a future first-round pick.  It’s also noted that a third team would likely be involved in order to make the trades work.

A person I spoke with who has inside knowledge of the Spurs explained to me that this scenario wouldn’t make sense for the Sixers or the Spurs for two reasons.

For the Sixers, trading Thaddeus Young for basically a low first-round pick is not enough in the mind of Sam Hinkie.  Hinkie will have all off-season/next season to come up with a potential landing spot for Thad if he does choose to trade him.  There’s no need to rush on a trade now and get something of lower value in return.

The Spurs would obviously love to get Thad at that low price, but it doesn’t seem likely.  To trade Thad, Hinkie would likely ask for a quality future prospect along with a future first-rounder.  Outside of getting Kawhi Leonard or Tiago Splitter, no one on the Spurs really fits that bill.  The Spurs are also highly unlikely to part with either of those players.  So a deal for Thad that involves only the Sixers and Spurs seems unlikely.  It’s unknown whether a third team would step in and help complete the deal by to giving up that type of talent to the Sixers.

On the idea of a trade between the Sixers and Spurs involving Evan Turner, I’m told the Spurs likely wouldn’t be willing to make the deal. I was told, “I don’t see Evan fitting in San Antonio.  Turner needs the ball and Tony Parker dominates the ball so they could clash.”  Of course the Spurs’ thoughts on this deal may have changed now that Parker is out for the “foreseeable future” with a “variety of maladies”.  But if the Spurs did acquire Turner for the regular season stretch run, what would Popovich do with Turner once Parker returns for the playoffs?

My contact also explained that adding Turner to an already crowded backcourt with Parker, Manu Ginobli, Marco Belinelli and Kawhi Leonard could upset the balance and chemistry of the Spurs.

The asking price for Turner isn’t much for the Spurs, but his muddled position with the team is a major concern.  It’s hard for the team to figure out what Turner could bring as a rental player for the second half of the season.  Giving up a future prospect for somebody that might not bring the production they’re looking for and who could be anchored to the bench come playoff time could be too risky for San Antonio.

Even if a deal with the Spurs might not be in the cards, Hinkie is definitely going to be making calls around the league up to the 3 PM deadline.

It makes a lot of sense for a team that’s tanking to get worse before it gets better. Trading away Turner and Hawes — two players who won’t be back here next year anyhow — or even Thad will put this bottom-dwelling team in even better position to secure the No. 1 pick in the 2014 NBA Draft.

Thus, it might be in the  best interest of the 76ers if Sam discounts his asking price (like the wholesale club store by the same name) for some of his veteran pieces before it’s too late.