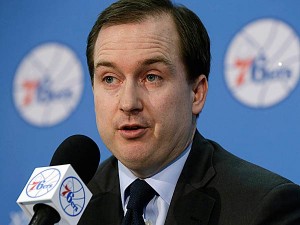 Those of us who have followed the 76ers for a while as devoted fans or professional sport writers understand the facts of what Sam Hinkie is trying to accomplish in the 2013-14 season.

We appreciate the way he traded established players for a stock pile draft picks.  We are aware that under watchful eye of head coach Brett Brown, Hinkie is trying to develop young players. And perhaps most importantly, we recognize that Hinkie is losing a great deal of games this season for ping pong balls at the 2014 NBA Draft Lottery.

But one element of Hinkie’s rebuilding project that has been intriguing and at times mysterious, is the revolving door of reserve players he has signed only to get rid of them after a few weeks or months at most.

The  Sixers roster has changed so often this season it makes us wonder, “Is there a method behind Hinkie’s frequent roster moves?”

The evidence indicates that there is in fact a method to Hinkie’s ways and after the jump, I’ll explain that possible method in detail.

Well we have theory as to why Sam does what he does with the current roster and we like to describe it for you after the jump. Even if Sam does not follow the plan we discuss, this could very well be the scientific way to build a great team almost from scratch.

What is point of working out a number of big men to choose one for a 10 day contract (Ex. Dewayne Dedmon)?  What is the behind the scenes reason the Sixers grabbed a long and athletic shot blocker out of the D-League and gave him a 10-day contract (Varnado) and now have decided to keep him for the remainder of the season?

In business, science or any other area where statistics can be gathered on measures of effectiveness such as performance, efficiency, durability, etc., one can rely on computer simulation to generate the measures of effectiveness and conduct ‘what if” analysis by changing key parameters.  Computer simulation is solely based on computer models to simulate processes, people, and technology without a need for real assets.  The computer simulation of real world activities such as a sport games may miss on important points since not every details of human activates can be modeled by machines.

There is an alternative simulation using real world assets (people, processes and technologies) to understand areas that the decision maker needs to concentrate on to improve his or her operations.  This method calls for keeping a subset of assets that already been committed to and designated as long-term intact, and fill the existing gaps by employing temporary assets in a real operation theater attempting to simulate.

The benefit of doing this type of simulation is immense.  First, you do not have to make long-term investment that may underperform in the future or do not go well with the existing assets hence, compromising your long term business goals and operations efficiencies.  Second, you can do “what if analysis” by switching assets around in variety of combinations and if it does not work, you switch to new assets right away.  Advanced analytics can help you measure your results and allow you to devise a long term strategy.

Now let’s go back to Sixers and Hinkie for a moment.  Has Hinkie been involved in this simulation plan all season long?  The answer may in fact be “Yes”.  However, basketball stats are more complex and he would definitely need advance analytics (and lots of it) to guide him through the process.  Hinkie is a Stanford graduate, and as smart as he is, he may very well use this technique to build the Sixers into a contender around just 3 to 4 players.

For example, on March 1st Hinkie added an athletic shot blocker from Development League (Varnado) with minimal offensive skills.  Vernado’s game reminds many of Nerlens Noel’s skill set.  But why did Hinkie initially add Varnado and this week choose to keep him for the remainder of the season?  He is tanking anyway, so why does he need to add a 26 year old journey man who may not develop further and may take minutes way from other players the Sixers plan to keep for next year (like Arnett Moultire for god’s sake!!).

The answer maybe that he is really trying to simulate the presence of Nerlens Noel and his skill combination in the field to study (on the court) and the effect Noel will eventually have on the team as a whole.  He would then conduct his advanced analytics on Varnado’s time in the lineup and study the results.  If his simulation using Varnado does not reveal a major improvement from adding a player possessing a Noel type skill combination, he will seriously think of  trading Noel for some other player/skill combo that his simulation revealed to be important.

Sam has 4 to 5 assets that he will most likely keep and they are worth something (Thad Young, MCW, Noel, Anderson and perhaps Wroten).  He is also looking at two high picks in the 2014 Draft.   Therefore, he will try to simulate various scenarios on court by filling the gaps around these guys (e.g., rebounder, perimeter defender, shot blocker, pick and roll big, etc.) using his revolving door strategy.  He may even get more sophisticated and simulate the two picks that he has his eyes on just to firm up his 2014 Draft strategy.

It is possible that by the end of this miserable season Sam will have run tons of analytics on various combination scenarios to know for sure what types of players he is going to draft come June.  He should at least have an intelligent guess on what hypothetically works and what does not.  If he feels a certain skill combinations can take this team higher just a notch, he will simulate it in the field by using temporary players, collect his stats for doing analytics and dump them when his research is complete.

After all, this is a dynamic optimization problem where each layer’s efficiency can be maximized depending on the players on the court.  The idea is to determine what skill combos can take this team to NBA finals. This type of simulation would reveal valuable info especially when Sixers are playing against NBA contenders that they will need to deal with in the next 5 to 6 years.  A GM cannot build a team by just adding great players simply because the sum of pieces may be much less than the whole (just look at Detroit).  The real field simulation and advanced analytics may actually allow Sam to simulate and measure repeatedly, without committing to long term contracts.  Eventually through this process Sam will find the right combination players/skills set and guide this franchise to the top of the NBA.

Lots of people may laugh at Sixers now.  But if scenario I have explained in this post is what Hinkie is actually executing, he may certainly have the last laugh.

Alex Hootan is a special guest contributor to Philadunkia.

Alex holds a PhD in engineering from UMass and is an expert in advanced data analytics.