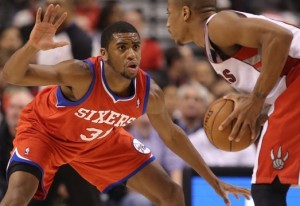 With March Madness in full effect this weekend and the 76ers underdogs in their match up with the Knicks on Friday and the Bulls on Saturday, we decided to give the usual Rapid Reacts post the weekend off.

Despite the most recent set backs — a 1-point loss at the Garden against the Knicks  and a 10-point defeat in Chicago — as well as a losing streak that has now stretched to a historic 24 games, we found something positive to discuss about the 76ers.

That one item of sunshine we have noticed happens to be the Sixers’ recent play at the defensive end of the court.  That’s right, after months of bashing this team for their inability to play defense at a respectable level, it appears we may have to back off a little because the 7-6 have improved in that area over their last five games.

Before we dive into the how and why of the Sixers improved play of defense, let’s take a look at some data:

Averages Over the last 5 Games for Opponents:

Average margin of victory during the last 5 games of this losing streak – 10.6 points per

The data indicates that the 76ers typically suspect defense has gotten better over the last 10 days.  Now let’s analyze a couple of the reasons that could be behind the Sixers recently improved defensive numbers:

1) Varnado & Sims:  We could argue for days about whether or not Jarvis Varnado and Henry Sims are NBA caliber players and whether or not they will be on the 76ers roster next year.  However, one thing that is not debatable is the idea that both Varnado and Sims are much better defenders than the departed Spencer Hawes and Lavoy Allen.  From the moment Sims (14 games)  put on a Sixers uniform, it was obvious that he cared more about defense and had a higher defensive IQ than either Hawes or Allen.  Now that Sims has had time to learn Brett Brown’s system and become more familiar with his teammates,  he is having a positive impact at that end of the floor.  In his last 5 games Sims owns a 98.6 DefRTg which is a vast improvement over his 103.3 DefRtg on the season.

Varando (13 games) has brought athletic ability and bounce to a 76ers frontcourt that was in desperate need of those elements.  The eye test tells me that Varnado had a longer learning curve than Sims when it comes to picking up the Sixers defensive scheme, but in the last 5 games he appears to be much more comfortable.  His 1.2 blocks per night and an improved 101.8 DefRtg (105.5 DefRtg for the season) over that stretch are encouraging stats.

2) More Burn for Hollis Thompson:  While I remain unimpressed withe “The Keeper’s” all-around NBA game, I am willing to admit that he is a very good defensive player.  Thompson is a solid on-ball defender who draws tough assignments on the perimeter.  Additionally he plays hard at that end of the court and within the team’s defensive schemes.  IMO he’s clearly been the 76ers best defensive player all season.  Over the last five games, Thompson has started four times and is averaging 25.8 minutes per game — up from 22 mpg. on the season.  In theory, more minutes for the Sixers’ best all-around defender over the last 5 games, should help produce better defensive stats for the team over that same span.  It’s weak, but it’s a theory I am willing to run with here.

3) Offensive Fire Power of Recent Opponents:  In their last 5 games the 76ers have faced the Grizzlies, the Bulls (twice), the Pacers and the Knicks.  Outside of the Kincks, all of those teams have a winning record and are currently destined for post season play.  However, not one of these teams will be mistaken for the Showtime Lakers or the 2013-14 LA Clippers.  In fact when it comes to scoring the ball, all four of those teams rank among the bottom ten in the League.  Chicago is last in the Association at 93.2 ppg.  Memphis and their 95.5 ppg. average places 27th in the NBA.  A 98.1 ppg. average ranks the Pacers 21st.  Coming in as the best scoring team in this bunch are the Knicks at 98.7 points per game, which ranks Phil Jackson’s new team 20th.  In short, during their last 5 games the Sixers have not exactly faced teams that push the pace and score a ton of points.

While the stats indicate that the 76ers defense has been better over the last 5 games, unfortunately it looks like the Sixers coaches and personnel can’t take all the credit for the recent upswing at the defensive end.  It seems the NBA scheduling gods deserve a tip of the cap as well.  Still, since we have been begging for better defensive play from the 76ers all year, we thought it was important to recognize an improvement at the end of the court, no matter how slight or how short lived it may be.