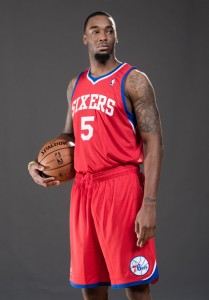 What will the 76ers do with Arnett Moultrie?

As well know, the former 1st round draft pick (27th overall in 2012 by the Miami Heat), was suspended on March 31st for violating the League’s drug ploicies.  The suspension capped off a two season roller coaster ride for Moultrie here in Philadunkia nation.

Since the suspension was announced, Arnett has completely fallen off the radar – outside of Instagram of course.  The season of the tank (which was a “huge success”) has come and gone, yet Sam Hinkie has had nothing to say about Moultire’s future with the Sixers.  In fact, outside of Brett Brown’s intial reaction to the suspension, “What I will say is, Arnett is still a part of the team and we will reach out to him and help him where we can,” it seems no one within the franchise is willing to acknowledge that Moultrie even exists anymore.

So is Arnett Moultrie a future 76er?

When Doug Collins and Rod Thorn traded for Moultrie at the 2012 Draft, they must have viewed the Mississippi State product as a serviceable big man who could contribute to the 2012-13 team.  However, we all know that Doug Collins is not fond of rookies and as a result Moultrie received limited minutes during his first year on the 76ers.  Thanks to infrequent playing time Moultrie averaged just 3.7 PPG and 3.1 RPG as a rookie.  But, Arnett did show flashes of potential, including two 14 point, 8+ rebound games in the final weeks of the 2012-13 season.  Still, with Andrew Bynum hurt for the entire season, and Spencer Hawes’ inconsistency, there are many who feel Arnett should’ve solidified himself into the rotation during that season.

Things just never clicked.  Throughout his rookie season there were questions about his motor.  At times, Moultrie looked uninterested.  If Coach Collins didn’t think a rookie was giving it your all out on the court, he would surely find your replacement somewhere on his bench.  Arnett spent time, along with Evan Turner, in Doug’s doghouse.

So let’s fast-forward to this season.  Moultrie had a new coach, yet seemed to have even more problems.  Arnett, being able to start fresh with a new coach, had ankle surgery before this year’s regular season started.  His ankle injury really hurt his chances to contribute to this rebuilding team.  With the power forward and center positions running thin, Moultrie had a chance to solidify his spot in the team’s rotation.  With the surgery sidelining him for the first half of the season, he missed his chance to make an impact and show the team he why he was considered a first round talent.

As Arnett began to make his way back, Coach Brown had a problem with his conditioning.  Brown wanted his players to be in the best shape of their lives, but Moultrie seemed to brush the coach’s requests to the side.  Since Arnett didn’t take Brown’s requirements seriously, he found himself on the bench for a few more weeks.  Shortly after expressing his frustration with the team, Moultrie finally received some playing time.

With very limited minutes (12 games — 15 mpg.), he didn’t really impress.  Of course, Being rejected by a trailing Gordon Hawyard didn’t help Moultrie’s case all that much either.  Soon enough, Coach Brown was sending out players on 10 day contracts rather than Arnett.  This was really telling.  Jarvis Varnado, who has been pretty decent during his time with the team, took playing time away from Moultrie. Brett Brown, to say the least, hasn’t been impressed with the 76ers second year player.

There were numerous rumors that Moultrie had an attitude problem and refuse to get on board with Brown’s program.  Soon Moultrie found himself in the D-League as a member of the Delaware 87ers.  Moultrie played in 8 games for the Sevens,  averaging 10.5 PPG and 4.5 RPG before getting suspended  5 games without pay for violating the NBA’s drug policy.  Arnett’s slide down a slippery slope within the 76ers organization had hit rock bottom.

So what happens next?

Since the team picked up Arnett’s contract, there is the chance that Moultrie will be with the team for, at least, one more season.  Does the front office see potential in his game and bring him to training camp?  Possibly.

Will Arnett’s recent suspension force the team to part ways with him through a buyout?  That’s the more likely scenario.

Arnett has had an interesting, albeit mosltly disappointing ride with the 76ers and now the question seems to be, ‘When will this drama end?’.