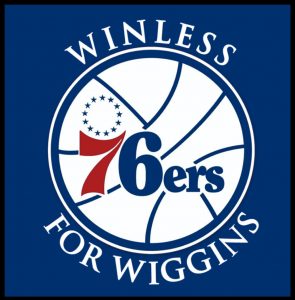 With the NBA Playoffs now in full force, there’s only one thing on the mind of Sixers fans at the moment — the 2014 NBA Draft Lottery. The Sixers were able to secure themselves with the second-worst record in the NBA this past season (19-63) but that only gives them a 19.9-percent shot that the No. 1 overall pick and just a 55.8-percent chance at a Top 3 selection.

Assuming the ping pong balls to fall in their favor, here’s a ranking of the potential selections the Sixers will be targeting on draft night.

Philadunkia scribes Jeff McMenamin, Carey Smith and Alex Gorge break down their top targets with the Sixers’ first selection after the jump…

McMenamin: Andrew Wiggins- If Wiggins drops into the hands of the Sixers on draft day, he’s got to be the guy Hinkie and Co. select. The guy is just simply loaded with potential and on a rebuilding team he’s exactly the type of talent that you want to bring in.

At 6-foot-8 with a 7-foot wing span, he’s got the measurements and athleticism to become one of the top wings in the NBA. Critics can look to his 17.1 points per game as a freshman at Kansas and say that he didn’t quite measure up to his expectations as a Jayhawk, but at just 19 he’s still got the best days ahead of him. If Brett Brown can truly push Wiggins to reach his full potential, you might finally be seeing a perennial All-Star suiting up for the 7-6 once again.

Smith: Andrew Wiggins-  I think Wiggins can be a very good wing player in this League for the next 10 years. I really like how his game developed and his stats improved as his freshman season at Kansas continued.

Wiggins was a dynamic scoring wing in high school, so I know he can fill it up, but this year he showed me that he can also play in a team system (Bill Self runs one of the most disciplined team centered offenses in CBB) and to me that means he has a high basketball IQ and is coachable. I love those attributes in a young player. Finally, I place Wigiins in the top spot because just about very NBA scout/front office person I talk with, says that Wiggins has the most upside.

Gorge: Andrew Wiggins-  I agree Wiggins should be the priority since Philly already has Noel stepping in at the center postion next year.  The idea of drafting Embiid is intriguing but can you imagine the backlash if both Embiid and Noel turn out to be extremely injury prone.

After the Bynum scandal I cant imagine Hinkie putting all of his eggs in the Embiid basket.  As far as Wiggins goes he had a very efficient and somewhat underrated year.  Wiggins would be a cornerstone wing player for the next ten years.  The perimeter defense and fast breaks would immensely improve by drafting him.  Obviously the potential for Wiggins could be much higher than that but he is still somewhat of a guarantee for large incremental improvement.

McMenamin: Julius Randle- Randle reminds me of a young Elton Brand. He’s someone that can dominate in the paint offensively and defensively while cleaning the glass, taking smart shots and making smart passes. His 6-foot-9, 248-pound frame will be a handful for any power forward in this league to deal with and as long as he keeps up with his conditioning, the Sixers could have themselves one of the most ferocious defensive duo’s in the league with Nerlens Noel accompanying him down low.

Hate him or love him, John Calipari has a knack for making his top talents NBA-ready in their years with his programs (Marcus Camby, Derrick Rose, DeMarcus Cousins, John Wall, Anthony Davis), I’d just rather not see his smiling face on draft night. He disrespected one of my favorite coaches of all-time.

Smith: Julius Randle- Yeah, I’ve heard all the detractors that talk about Randle’s fitness level and his lack of defensive fundamentals. However, I am trusting that everyone’s coaching guru, Brett Brown, can whip Randle into shape and teach the kid those elements of the NBA game.

In my opinion Randle is the prospect most likely to step in a contribute immediately. He averaged 15 points and 10 rebounds per contest at Kentucky, but his most impressive stats were his 50-percent from 2-point range and averaging 7+ FTA’s a game. The Sixers are in desperate need of a big who can score and/or get to the FT line for easy points. He thrives in traffic and after initial contact. Lastly, I really like the nasty streak Randle displayed at times this season and I think that attitude could give this young Sixers roster a much needed edge.

Gorge: Jabari Parker-  I went with Parker for a couple reasons.  The first is somewhat of the same reason I went with Wiggins, guaranteed improvement.  I have full confidence Parker could come in and average 16 PPG, 7 RPG and 3 APG.  He will also add a lot of lineup flexibility with small ball.

Thad, Jabari and Noel on the court at the same time could prove lethal.  I also believe Jabari’s shooting is levels above Randle’s and that outways Randle’s efficiency around the rim.  He looks like he was meant to play basketball from an athletic standpoint.  I don’t see Parker getting hurt and he is way ahead of his learning curve in how to play the game compared to Randle.  I think Randle is great but the scouting report on him since high school is that he gets fat quick.  Conditioning issues could be a big concern for Randle.  On top of that I just dont see Randle as someone who has a long Tim Duncan like career.  I think his body will break down at somepoint and cut his career short.  That being said, Randle in the short term will without a doubt come in the league and produce.

McMenamin: Jabari Parker- He’s the freshman player of the year and the most polished player at the top of the draft. His 19.1 points, 8.7 rebounds and overall consistency this past season for Duke make him a hot commodity to any team looking to rebuild. I just think that some of the flaws in his game at this stage are worrisome and if not fixed soon could hurt his transition into the NBA tremendously.

His first flaw is falling in love with the jumpshot. Everyone who’s a Sixers fan has collectively pulled their hair out the past 10 years by the team’s constant faith in the jumpshot. This is a great shot for the Carmelo Anthony’s and Kevin Durant’s of the NBA, but Parker is not at that level yet. When times are tough offensively, a lot of times you’ll see Parker try to get things going with his mid-range or outside game but he has to start realizing that this is not his game.

Parker is at his best when he’s taking the ball to the hoop and drawing fouls. He averaged 6.1 FTA’s a game last season for Duke and it should’ve been even higher than that. My other worry is his position in the NBA. Is he a three or a four? His 6-foot-8, 235-pound frame is the perfect tweener size for an NBA forward. We’ve all seen how this has hurt Thaddeus Young’s stock over the years. Does Parker have the athleticism and quickness to keep up with NBA small forwards? Does Parker have the power and strength to continue his rebounding prowess in the NBA? We’ll have to wait and see.

Smith: Jabari Parker-  This isn’t an anti-Jabari thing as I think the kid has a very nice skill set and I like a lot of what I saw from him this year — except in the NCAA Tournament. My ranking Parker third is an anti-Coach K thing.

Outside of Grant Hill and Kyrie Irving (who played a very limited number of games at Duke), Coach K’s players do not become “stars” in the NBA. I don’t know the how’s or why’s of it, but the kids he recruits and that play at Duke do not blossom into repeat All-Star players or All-NBA level guys.

But developing players for the NBA is not Coach K’s job. His job is to win college basketball games and he does a damn fine job of it. So Jabari is just guilty by association and thus option No. 3 for me. It’s a terrible theory for a hoop head like me to own, but I am going with my gut here and sticking with it.

Gorge: Julius Randle-  Randle is a left-handed beast of a power forward.  He is more geared towards post play rather than shooting at 6-foot-9, 248 pounds.  Randle’s post play is almost unstoppable and is jumpshot is average but still improving.

I believe Randle will come in and immediately help any team that drafts him.  I do however have him slotted below Wiggins and Parker for a couple of reasons/concerns.  Randle has been considered a blackhole for quite a while now.  That may or may not be a concern if he is taken by the Sixers next year.  It depends on how the rest of the roster shakes out.  As mentioned before, Randles conditioning would be a big concern for me in the long run.  It was been well noted that Randle can gain weight fast and his body just doesnt look like one that will last 15 years in the NBA at a high level.  He reminds me much more of a Greg Oden type runner rather than Serge Ibaka who hopped out of the womb running his lane on a fast break.