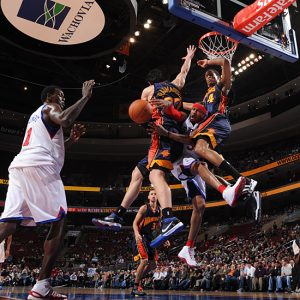 If the 76ers pound on the lifeless Golden State Warriors and no one is down at the Wachovia Center to witness the game, does the outcome still count as a victory for Philadunkia’s home team?  The answer of course is…ABSO-FREAKIN’-LUTELY.  That’s right people, right now we’ll take ‘em anyway we can get ‘em.  The 12-game loosing streak was snapped last night as the Sixers jumped all over the GSW, led by 32 for a minute or so and then cruised to a 117-101 victory.

Now we know the Sixers beat the GSW last night who are not exactly Kobe and the LA Lakers from a competition standpoint, so we’ll refrain from going over the top in our praise of the Sixers efforts.  In fact GS is arguably the worst team in the League and they were in the fifth game of a 9 day road trip.  However, all of that being said, there were a lot of positives we pulled from the W last night, especially considering the Sixers got no help offensively from Andre Iguodala for three-plus quarters.

Iguodala had a nightmare game last night (more on that in a moment) but thanks to the 1st half efforts of Thaddeus Young, the Sixers didn’t need AI9 to put away the Warriors early in this one.  Thad hung 23 points on the GSW in the first half and finished with a smooth double-double, 26 points and 14 rebounds.  “Smooth” is the only word that would accurately describe Thad’s game last night.  He really excels in an up-tempo style of play and so last night’s game against the run-n-gun Warriors played right to Thad’s wheel house.  Spin moves, pump fakes followed by up and unders, reverse lay-ins, flushes on the break and one 3-ball, Thad had it all working last night.

A lot of the credit for #21’s big game goes to Thad being hot, some of it goes to the defensively challenged GSW and some of it goes to Eddie Jordan for his lineup change that saw Thad at the 4-spot.  A shocking first 5 of Iverson and Holiday in the back-court with AI9, Thad and Sammy Dalembert across the blocks allowed the Sixers to beat the GSW at their own run-n-gun game (20-9 on FBPs).

We’ve always loved Thad at the 4-spot as playing there really allows him to get easy buckets against bigger, slower opponents.  The drawback of course is that Thad is a little on the thin side and thus takes a beating at the defensive end.  So we question if Thad can hold up physically for any real length of time running the majority of his minutes at the 4, but it worked last night and got the Sixers back in the win column.  For that we tip our cap to Thad and Jordan.

NBA.com has the highlights of Sixers vs. GSW