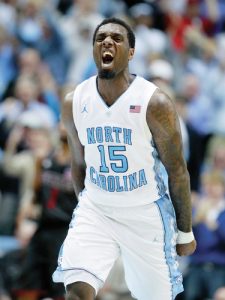 With the 2014 NBA draft lottery now less than a week away, experts have spent a lot of their time focusing on the top of the draft and the potential first round selections for each team involved.

We here at Philadunkia broke down the Sixers’ potential first round picks in the past few weeks (first selection, second selection) as we now await the ping pong balls to (hopefully) fall in the Sixers’ favor on Tuesday.

What hasn’t been discussed widely among the experts is the second round. In a draft that many label as the deepest in years, I’m sure that Sam Hinkie and Co. have their eyes peeled on plenty of second round gems who could still be around for the Sixers’ five second round selections (No. 32, 39, 47, 52 and 54) on draft night.

After the jump, I’ll break down five potential players who the Sixers might target in the second round…

As we all know, Sam Hinkie isn’t opposed to making deals for the better of the franchise. That was made clear when he traded Jrue Holiday on draft night last season, as well as dealt Spencer Hawes and Evan Turner at the deadline for a slew of second round picks. It’s highly unlikely that the Sixers will keep all of their second round selections this year come draft night, as he’ll likely try to package them to get back into the first round for a late selection.

With this in mind, it doesn’t make sense to breakdown each pick one-by-one but I’ll try to give you in my opinion who the best talent will be in terms of need for the Sixers in Round 2.

One of the more interesting prospects in this draft is P.J. Hairston. At 6-foot-6, 230 pounds Hairston has the size you want in an NBA 2-guard, but a bad rap sheet has experts shying away from the idea of teams going out on a limb to take Hairston on draft night. DraftExpress.com has him going at No. 24 while NBADraft.net has him falling to No. 36.

Hairston was dismissed from the University of North Carolina, after he was arrested in connection with the possession of marijuana. He had averaged 14.6 points and 4.3 rebounds in his sophomore year at UNC in just 23 MPG and looked to be on his way to becoming the top prospects in the ACC.

The dismissal led to Hairston playing in the D-League this past season for the Texas Legends, where he was a scoring machine. He averaged 21.8 points and 3.5 assists where he showed great ability to attack and finish at the rim, while he developed a solid jump shot to his arsenal.

The knocks on Hairston are his basketball IQ, his ability to create offense for his teammates and the baggage which surrounds him. In my opinion he’d be a steal with one of the Sixers’ second round selections. He’s worth the risks because the only thing he’ll be asked to do for the Sixers is score. He’d immediately compete for the starting SG spot over James Anderson and Hollis Thompson.

One position the Sixers should definitely be aiming to add depth for next season is the center position. It’s unknown how healthy Nerlens Noel will be to start the season next year and it’s equally as unknown how many minutes he’ll be able to contribute per night.

Bring in the Spanish League’s Walter Tavares — a 7-foot-3, 265 pounder with a defensive prowess — and the Sixers could have themselves a serviceable backup coming in the second round. There’s not much video evidence on Tavares’ play, but what’s said about him is that he’s developed into one of the elite rebounders and shot blockers in the Spanish ACB. He moves his feet well, boxes out, shows a high activity level, and uses his incredibly long arms, huge hands and excellent timing to clean the glass.

DraftExpress.com has him slotted to the Sixers at No. 32, while NBADraft.net has him dropping to No. 48. He’s worth a good look from Hinkie and Co. if he’s available to the Sixers in the second round.

I’ll be the first to tell you, LaQuinton Ross was largely a disappointment in his three years at Ohio State. That being said, I recognize the potential talent that he possesses, especially from beyond the arc.

Ross could serve as strictly a shooter/athlete in the NBA, somewhat like James Posey was during his 12-year career. The two have a nearly identical body frame — Posey was 6-foot-8, 218 while Ross comes in at 6-foot-8, 219. If Ross can come in, in a Posey-type role and add some consistent three-point shooting to this team next season, that’s all I can ask of him.

From 2003-2009, Posey averaged just over 100 three’s per season with the Memphis Grizzlies, Miami Heat, Boston Celtics and New Orleans Hornets. Ross averaged just over 38 per season in his last two with Ohio State (where he was relied upon heavily to produce offense for the Buckeyes), but if he shifts his focus in the NBA to being strictly an outside shooter, I think he can potentially have a long and prosperous NBA career.

He shouldn’t be the focus of one of the Sixers’ top second round selections, but if he’s around in the mid-second round he might be worth a look. NBADraft.net has him slotted to the Sixers at No. 47, while DraftExpress.com also has the Sixers taking him at No. 52.

Like Tavares, I don’t know anything except what I’ve read about Inglis and what I’ve read sounds like he could serve as a quality NBA player defender with the right teacher. At nearly 6-foot-9, 240 pounds with a 7-foot-3 wingspan, he has extremely good size for an NBA wing.

He’s only 18 and is said to have tremendous defensive potential, capable of guarding the 2-3-4 positions like former Sixers wing Andre Iguodala. He isn’t close to Dre in terms of basketball IQ or passing instincts, but he has the potential to grow into a similar defensive force with the right coaching. This one’s for you Brett Brown.

He’s slotted to go at No. 40 on DraftExpress.com but isn’t mentioned at all on NBADraft.net’s big board.

Young has the look of an NBA player, but not being able to dominate consistently on the college level is a bit of a concern here considering his size and age.

At 22 years old, Young comes in as one of the oldest players in this draft class. He’s also one of the most chiseled with an impressive 6-foot-9, 249 pound frame and a 7-foot-1 wingspan. His past three seasons at Florida he consistently averaged 10 points and six rebounds a game, but more was expected of him simply because of his size and stature.

He had a relatively quiet senior season where he only notched one double-double and only had two games with more than 10 boards. There’s questions surrounding his intensity and consistency defensively, where he’d likely contribute the most on the NBA level.

DraftExpress.com has him going at No. 42 while NBADraft.net once again leaves him off their big board entirely. There’s obviously a large gap in what kind of worth he’d provide in the NBA, as there’s plenty of video evidence to examine his game.