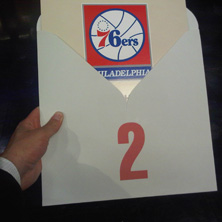 As we all know, the NBA Draft Lottery is only a few days away.  For Philadunkia nation, May 20th will be one of the most stressful nights of this long season due to its huge ramifications.  The 76ers have the second best odds of attaining the #1 pick in this year’s NBA Draft.  Unfortunately, having the second best odds doesn’t always seem to land a top pick.  Of course we have a 19.90% chance of grabbing the top selection, but our selection has a chance to slip all the way to the 5th spot.

Over the past ten years there have been a number of teams who have unexpectedly jumped into the top 3 on the draft board via the NBA Draft Lottery.  After the jump, I’ll review the last ten years and take a look and the teams who have been lucky enough to move up the board and I will also examine how that pick panned out for the franchise.

In 2003, the Cavaliers came into the draft with the worst record in the League.  This landed them the number #1 pick.  That pick turned into LeBron James a couple weeks later.  I think we all know how he’s turned out.  One team that slipped into the top 3 of the 2003 Draft, the Detroit Pistons, ended up with the 2nd pick in the Draft with the 6th best odds.  That 2nd pick landed them Darko Milicic.  Remember him?

In 2004, the Orlando Magic landed the 1st overall pick with the worst record in the League.  This landed them Dwight Howard.  Dwight was a project at the time, but with all of his physical tools, he soon became the all-star level player we’ve come accustomed to seeing.  One team that jumped into the top 3 of the Draft was the Charlotte Bobcats.  The Cats landed the 2nd overall pick despite owning the 5th best odds.  With the pick, the Cats selected Emeka Okafor.  Okafor never really became the player that he was projected to be coming out of UConn.  This year was Okafor’s 9th in the League, he’s had career averages of 12.3 PPG and 9.9 RPG and is playing for his fourth team.

In 2005, the Milwaukee Bucks jumped 5 spots in the Lottery to surprisingly land the first pick in the Draft.  The Bucks entered the Draft Lottery with the 6th best odds to land the 1st pick.  With the #1 pick, the Bucks selected Andrew Bogut.  Bogut averaged 9.4 PPG and 7 RPG during his rookie season with the Bucks, but the frequently injured big man is currently playing for the Golden State Warriors.

In 2006, another surprising jump occurred at the NBA Draft Lottery Selection Show.  The Toronto Raptors, coming into the Draft Lottery, had an 8.80% chance of landing the top pick in the Draft.  The ping pong balls fell their way that night.  With the #1 pick in the draft, the Raptors selected Andrea Bargnani.  During his 7 years in the NBA, the former #1 pick has averaged 15 PPG and 4.9 RPG.  Decent numbers, but not what the Raptors were expecting.  They would’ve been much happier with the 2nd pick that year, LaMarcus Aldridge.

In 2007, the Durant-Oden draft saw a complete shake up.  The Portland Trail Blazers, with a 5.30% chance of winning the Lottery, ended up with the #1 pick.  The Seattle SuperSonics, with an 8.80% chance of grabbing the top pick, landed in the 2nd slot.  As you all know, Greg Oden went 1st overall and Kevin Durant followed immediately as the 2nd selection.  I think it’s safe to say that Portland made the wrong choice here.

Over the past 10 years, no NBA Draft has seen the jaw dropping jump that happened at the 2008 Draft Lottery.  The Chicago Bulls secured the #1 pick with the 9th best odds.  The team definitely had lady luck on their side that night because they only had a 1.70% chance of winning the Lottery.  This jump landed Chicago the explosive, yet injury prone, Derrick Rose.

In 2009, the Los Angeles Clippers landed the 1st overall pick with the 3rd best odds.  This pick brought the franchise one of their current superstars, Blake Griffin.  The biggest jump in the Lottery that June was by the Memphis Grizzlies.  They moved up 4 spots in the Lottery which landed them the 2nd overall pick.  With the pick, the Grizzlies selected Hasheem Thabeet.  Needless to say that didn’t work out so well for the Grizz.

In 2010, the 76ixers, with the 6th best odds at the #1 pick, moved all the way up to the second slot to grab Evan Turner.  Yes, we all know that name, don’t we?  “The Enigma”  never really found his spot on the team.  We thought we had our backcourt of the future solidified with Jrue Holiday and Evan Turner.  Well, 4 years later, neither of them are a part of the team’s future plans.  The Washington Wizards selected John Wall with the #1 pick that year.  They came into the Draft with a 10.30% chance of grabbing the top selection.  I think it’s safe to say that they made the correct choice.

In 2011, the Cleveland Cavaliers jumped 7 spots in the Draft Lottery to grab the #1 selection slot.  Coming into the Lottery, the Cavs had a 2.80% chance of acquiring the top pick in the Draft.  With the top pick, the Cavs selected injured Duke point guard Kyrie Irving.  Irving, one of the most exciting young talents in the NBA, has certainly made a name for himself in the League. In just two seasons, he’s become an All Star who has averaged 20.7 PPG and 5.8 APG.  He is a crucial piece of Cleveland’s future, assuming he decides to remain a Cav.

In 2012, the New Orleans Pelicans grabbed the #1 pick with the 4th best odds.  With the pick, the Pelicans selected future stud, Anthony Davis.  Anthony Davis is getting better every year, and will soon become one of the top players in the League.  Last season, his 2nd year in the League, he averaged 20.8 PPG, 10 RPG, and 2.8 BPG.  He is the future in New Orleans.

Last year’s Draft Lottery saw the Cleveland Cavaliers jump up 2 spots to secure the #1 pick.  Surprisingly, Anthony Bennett of UNLV was their selection.  The biggest jump in the 2013 Lottery belonged to the Washington Wizards.  With the 8th best odds, they secured the No. 3 slot, which landed them Georgetown’s Otto Porter.  Both of these players have much to prove entering their second year in the Association.  It can be argued that both of these players have yet to find their role in the league.  It will be fun to see how they progress in the upcoming years.

As you can see, the Draft Lottery has seen plenty of unexpected surprises during the past 10 years.  As I went through the drafts, I noticed that the team with the 2nd best odds for the #1 pick has fallen out of the Top 3, seven out of ten times.  This isn’t the best of news for Sixers fans.

Hopefully lady luck is on our side on Tuesday night.   Everyone go find and hold onto your good luck charms.