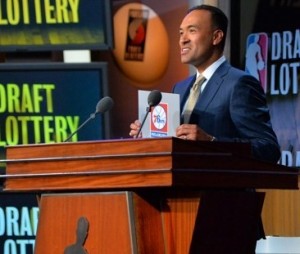 As a general manager, having a top ten pick in the NBA Draft is something that could either make or break the future of your franchise.  It goes without saying then that having two selections in the top ten of the 2014 NBA Draft is a historic occurrence that Sam Hinkie can not afford to botch.

If Hinkie and the 76ers are  fortunate enough to grab a projected “future star” with the third pick in the draft, it doesn’t mean that he can afford to make a mistake with the 10th selection.  If Hinkie can walk away from this draft with two very good prospects he will have greatly accelerated the rebuilding process here in Philadunkia nation and provided a launching point for bringing the Sixers back to relevance on the Philadelphia sports landscape.

However, grabbing a prospect at No. 10 who can help improve a team that won only 19 games this season will not be an easy task. Since 2000, the NBA Draft has seen players ranging from the likes of Joe Johnson to Luke Jackson selected at the 10th overall spot. The object for Hinkie will be to avoid the Luke Jackson’s of the world.

After the jump, I’ll review and analyze the players selected 10th at the NBA Draft during the last thirteen years.

The Orlando Magic, with the 10th pick in the 2000 NBA draft, selected Keyon Dooling.  Keyon’s stay with the Orlando Magic was short lived due to a draft night trade in which sent his rights to the Los Angeles Clippers in exchange for Cory Maggette.  Dooling spent most of his 13 year NBA career as a backup.  During his time in the NBA, Dooling rarely saw time in the starting lineup, but that wasn’t a bad thing, necessarily.  As a career backup, Dooling help his team as a second guard off the bench with a smooth jump shot (career 41% on FGAs).

The 10th pick in the 2001 NBA Draft saw future star, Joe Johnson, selected by the Boston Celtics.  Joe Johnson, now a member of the Brooklyn Nets, didn’t last very long with the Celtics though.  During his rookie season, Johnson was traded to the Phoenix Suns for Tony Delk and Rodney Rodgers.  At the time of the trade, the Celtics were much more infatuated with winning than development.  Joe Johnson went on to be a part of the exciting Suns teams which featured Steve Nash and Amar’e Stoudemire in the early 2000s.  Johnson saw most of his success with the Atlanta Hawks where he was considered one of the top scorers in the NBA.  Johnson, during his seven seasons with Atlanta, averaged 21 PPG.

The Miami Heat, during the 2002 NBA Draft selected Caron Butler with the 10th overall selection.  Caron Butler started 78 games for the Miami Heat during his rookie season averaging 15.1 PPG.  During his sophomore season, Butler saw a bit of a drop in his production.  Due to his injuries and decline in production during his 2nd year in the League, Butler was a part of the trade that sent Shaq to the Miami Heat.  In exchange, the Lakers were awarded with Butler, along with both Lamar Odom and Brian Grant.  During his one season with the Los Angeles Lakers, Butler averaged 15.5 PPG.  It finally looked like Butler found himself a home alongside Kobe in LA.  But the pairing was short lived.  Before the 2005 NBA season, the Lakers traded him, along with Chucky Atkins, to the Wizards for Kwame Brown and Laron Profit.  Butler finally found himself a home in Washington and after signing a 5-year, $46 million deal, he along with Gilbert Arenas and Antawn Jamison headline the Wizards 2007-08 playoff team.  Butler has played for a total of 8 teams and spent this past season with Bucks and recently eliminated OKC Thunder.

The 2003 NBA Draft saw the Washington Wizards select Jarvis Hayes with the 10th pick.  Hayes wasn’t one of the better 10th picks since 2000, but he proved to be a serviceable big man in the League.  During his rookie season with the Wizards, Hayes averaged 9.6 PPG and 3.8 RPG.  Jarvis spent only 4 seasons with the Washington Wizards while his NBA career only lasted 3 more seasons after that.  Hayes had career averages of 8.3 PPG and 3.1 RPG.

Another questionable selection at the 10th spot in the NBA Draft occurred in 2004 when the Cleveland Cavaliers selected Luke Jackson.  Jackson only spent 4 seasons in the NBA with a career average of 3.5 PPG.  Hopefully the 76ers can find someone who is much more productive than the Cavaliers did with the 10th pick, 10 years ago.

Andrew Bynum, someone we all have come to know and heavily dislike, was selected 10th overall by the Los Angeles Lakers in 2005.  Coming into the draft, Bynum was seen as a project big with a bunch of upside.  Bynum was a 17-year old high school kid (St. Joseph’s HS — Metuchen, NJ) when he was drafted.  The Lakers saw a prospect that could soon become their next franchise center.  Seeing all of Bynum’s untapped potential, the Lakers hired Kareem Abdul-Jabbar to help mold young Bynum’s game.  As time went on, the Lakers cashed in big with their investment in Bynum.  During the 2006-2007 NBA season, the Lakers had difficulties keeping their big men healthy, as both Kwame Brown and Chris Mihm were sidelined at the start of the season.  Andrew Bynum started 53 games that season, averaging 7.8 PPG and 5.9 RPG.  In more recent years, Bynum hasn’t seen much time on the court due to his degenerative knees.  All of the hope that he brought to Philadelphia was hindered by his bad knees.  After the team decided not the resign their big mistake, the Cleveland Cavaliers decided to take a gamble on the injured center.  His Cavaliers career didn’t last long, as Bynum only made it through 24 games with the Cavs before being released.  Indiana also took a chance on Bynum this season, but in the end, it didn’t work out.  Bynum appeared in only two games for the Pacers.  Most of his time in Indiana was seen from the bench while he tried to get over his injuries.  Injuries, as all of us 76ers fans fondly remember, have turned Bynum from one of the best big men in the game to an injury-prone, waste of a 10th pick.

The 2006 NBA Draft saw Mouhamed Sene drafted 10th overall by the Seattle.  Sene only spent 3 seasons in the NBA — 2 with Seattle and parts of the 2008-09 season with Toronto, OKC and New York.  During his time in the League, he played a total of 47 games and averaged 5.5 MPG.  I think it’s safe to say that the Sonics got this pick wrong.

During the 2007 NBA Draft, the Sacramento Kings selected Spencer Hawes with the 10th pick.  Of course we love to bash Hawes from his time here in Philadelphia, but for the 10th pick, he has done pretty well for himself.  Seen as a big man with a European style game, Spencer has added a unique skill set to the center position.  As the NBA continues to grow, we are seeing much less of the traditional big man while we are seeing much more of the stretch big men who can shoot from multiple spots on the floor.

The New Jersey Nets selected Brook Lopez with the 10th pick in the 2008 NBA Draft.  Brook Lopez has shown that he can be a contributor.  The seven foot center has been in the League for 5 years now, with solid career averages of 18 PPG and 7.3 RPG.  Going forward, Brook Lopez, if healthy, will continue to improve and give his team a reliable option on offense.

With the 10th pick in the 2009 NBA Draft, the Milwaukee Bucks selected Brandon Jennings.  During his rookie season, Jennings tallied 55 points in a single game.  That game which inspired an Under Armour shoe campaign officially put him in the national spotlight.   During his first 4 seasons in the NBA, Jennings has career averages of 16.7 PPG and 6.1 APG.  Unfortunately for Jennings, he now finds himself in the mess that has taken over Detroit basketball.

The Indiana Pacers hit the jackpot with the 10th overall selection in the 2010 NBA Draft.  With their pick, the Pacers selected Paul George.  George has emerged as one of the top talents in the NBA today and is one of the main reasons why the Pacers finished first in the Eastern Conference this season.  Paul George will continue to grow in the NBA and will be one of the well known faces of the League for many years to come.

During the 2011 NBA Draft, the Milwaukee Bucks selected Jimmer Fredette with the 10th pick.  Jimmer was then traded to the Sacramento Kings in a three team deal. Fredette was a high pick mainly because he could put the ball in the bucket in college.  Although he can shoot the lights out, Jimmer has had difficulty transitioning his game to the NBA.  Jimmer is viewed as too small for the two-guard postion who has many problems on the defensive side of the ball.  Due to his inefficiencies, he hasn’t been able to stay on the court.

The New Orleans Pelicans selected Austin Rivers with the 10th pick in the 2012 NBA Draft.  Rivers, the son of Clippers head coach Doc Rivers, hasn’t found himself in the league just yet.  Now, with Jrue Holiday as the team’s PG of the future, Rivers will probably find himself as the backup.  Rivers may have a hard time with playing time due to the other guards on the Pelican’s roster.  With Eric Gordon and Tyreke Evans both on the team, Rivers may be the odd one out.  If Rivers wants to get playing time with the Pelicans, he is going to need to improve his game and show that he can play.

With the 10th pick in the 2013 NBA Draft, the Portland Trail Blazers selected C.J. McCollum.  C.J. spent his rookie season dealing with injury.  Due to his injuries, McCollum only played in 38 games with 12.5 MPG.  This upcoming season will be a big one for McCollum.  Mo Williams, the team’s backup PG, is opting out of his deal in order to secure himself a better contract.  If the Blazers believe McCollum can replace Williams, the team may let Williams walk.  McCollum will surely get a chance to prove himself this upcoming season.

In recent history, the 10th pick has surely been a crap shoot.  To be honest there have been very few prospects taken at No. 10 that have become the  face of a franchise.  However, with the 2014 draft class being considered “one of the deepest ever”, Hinkie finds himself in a great position to break that disturbing trend and find a contributor for this rebuilding team.  No matter who Hinkie selects at No. 10 on June 26th, it probably will take a few seasons to know if the 76ers got this pick right.

Until then…In Hinkie we trust.