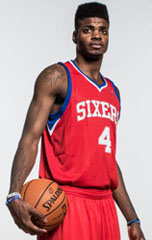 When you first see Nerlens Noel in person, you can’t help but marvel at the man’s stature.  At 6-foot-11, 228 pounds and a 7-foot-4 inch wingspan, he’s one of the tallest and longest players in the NBA.

I’ve had the chance to stand side-by-side with him on several occasions now and I’ve been thoroughly impressed by his measurements and what he can potentially bring to the Sixers’ frontcourt in the future.

On draft night last year, I had written off the idea that the Sixers were capable of landing the big man out of Kentucky and I was admittedly shocked when the Jrue Holiday trade had gone down.  Most draft boards had Noel off the board at No. 1 to the Cleveland Cavaliers and, as much as I liked Jrue as a player and a leader, getting two lottery picks for him while shedding salary was a heady move by GM Sam Hinkie.  The Sixers also needed to make it clear to its fans that they were parting ways with Andrew Bynum, and despite losing Jrue, getting the top center prospect in the draft did that.

Sixers ownership learned from their mistakes with Bynum and decided to shut Noel down for the year.  With an injury as severe as a torn ACL, especially coming from a player who’s had a history of knee issues, this was the right move.

Come July 5th, Noel, along with the Sixers’ other newly acquired draftees, will take the court at Orlando Pro Summer League for the start of their rookie careers.  But before that happens however, it’s time to sit down and get a refresher on Noel.

What made the flat top donning big man such a hot commodity last year and what should we expect from him next season?  What led to his draft stock plummeting, falling to No. 6 overall last June?  What will potentially make him a game changer to the Sixers in the future?

For most people in the United States, February 12th is the date when guys start stopping into a local CVS to buy last minute Valentine’s Day gifts for their significant others.  For Nerlens Noel, February 12th was the night that his life and basketball career changed forever.

Noel hasn’t played in an official basketball game since that night.  It’s taken him over a year to rehab back to where he feels “100 percent” after tearing his ACL in his left knee while running down a block against Florida.  Following the block, he crashed into the basket padding, fell to the ground in writhing pain and the rest is history.

In Noel’s 24 games prior to the injury, he averaged 10.6 points, 9.6 rebounds and led the nation in blocks at 4.4 per game.  His injury sent the then 25th ranked Wildcats to the NIT, as they finished the season 4-4 in his absence. 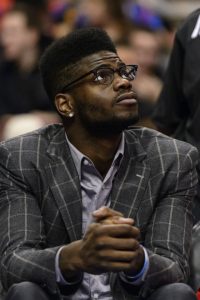 In Noel’s sophomore year of high school, he broke the growth plate in his left knee which required him to sit out for the rest of the year. Some believe that Noel rushed back from this injury too soon to play AAU, which contributed to the torn ACL in his same knee at Kentucky.

All reports from the Sixers’ medical staff and Noel himself say that he’s ready to go at Orlando Pro Summer League, but the question remains how healthy his knee really is and if there will be any setbacks?

It’s likely that Noel will need to bulk up in order to compete against the top centers in the NBA and the strain from that alone could have devastating affects on Noel’s progression.  Most NBA centers hover around the 240 pound range, which means Noel will look to add an extra 10 pounds of muscle in the offseason.  It’s also unknown how an 82 game NBA season will impact Noel’s body, especially coming off of an injury as severe as an ACL tear.

Before his injury Noel was known for his explosive leaping ability, while having the speed of a guard in transition.  Playing like this consistently for an entire 82 game season will put a lot of strain on his knee and the hope is that he’s conditioned and strengthened his body enough to handle it.

If the Sixers handle his minutes appropriately I don’t see any concerns here, but playing him extended minutes could lead to some serious problems down the road.  If you take away Noel’s speed and leaping ability you’re looking at an entirely different player and management will have to examine him very closely on a daily basis to make sure he’s staying fully healthy.

How Noel’s shot blocking will affect the Sixers 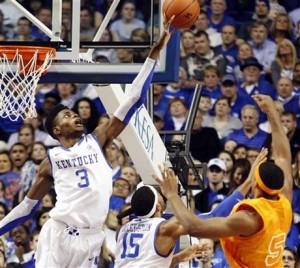 The Sixers haven’t had a legit paint protector since Dikembe Mutombo in the 2001-02 season. If Noel comes back anywhere close to the level he played at Kentucky, the Sixers’ defensive numbers should greatly improve.

The Sixers surrendered a League-worst 109.9 PPG last season.  They also ranked 25th in the League in blocks per game (4) and 21st in the League when it came to giving up points in the paint (44.2).

Having a paint protector allows defenses to focus more on guarding the perimeter. Opponents shot 47.7 percent against the Sixers last season, which ranked 28th in the NBA.  They allowed nine three’s per game which placed them 29th in the League.

When you can affectively stop opponents from shooting jumpers, it will force them into driving situations and the hope is that Noel will be up for the task.

Of the teams with the five top shot blockers in the league (Anthony Davis, NO; Serge Ibaka, OKC; DeAndre Jordan, LAC; Roy Hibbert, IND; Tim Duncan, SA), four of them had winning percentages above .683 this past season and, if it weren’t for a slew of injuries for the New Orleans Hornets, they could’ve joined the party as well.

The Sixers have a team option on Noel for the 2015-16 season.  If he shows he isn’t the same player that he used to be next season, the Sixers can simply let him walk in free agency.  This would definitely be devastating to the organization, considering what they traded away in order to get him, but at the same time the team will still have plenty of cap space and potentially a high draft pick in order to move in another direction.

In an article by Marcus Bass from HoopsHabit.com, Bass points to a study by the American Academy of Orthopedic Surgeons which is troubling when it comes to Noel’s recovery.

“In a 2013 report on ACL recovery published by the American Academy of Orthapedic Surgeons, their study found that the overall rate of another injury within two years to the ACL – on the same or opposite knee is six times greater among athletes who undergo ACL reconstruction surgery and return to their relative sport.

In a 24-month study, 24 of the 125 participants sustained an ACL injury; 23 occurred in individuals who had undergone ACL reconstruction. Although the odds are usually stacked in favor of a draft pick so high, there’s the possibility of the 76ers hopes for the future to wind up squashed should Noel sustain another injury.”

With as many doctors, experts, coaches and trainers who’ve been keeping a close eye on Noel, I believe he’ll be on a very short leash next season with the Sixers. But, the chance at a catastrophe is always there with this type of injury. It’s good to know that whatever happens, the Sixers will still have the opportunity to look for another big man if he indeed never returns to form.