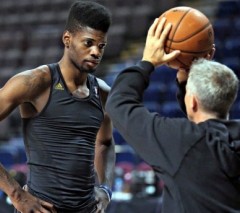 Believe it or not, 76ers big man Nerlens Noel has more going on right now than just rehabbing his knee and retooling his jump shot.  Off the court Noel is making a few business moves and recently signed on as as an athlete advisor with CoachUp, a Boston-based organization that utilizes an online marketplace to match athletes with private coaches.

Noel is the latest of a long line of Beantown area professional athletes who have joined the ranks of CoachUp to impart their wisdom.  The 76er with the classic high top fade will be working alongside other stars on CoachUp’s Athlete Advisory Council such as former Red Sox’s outfielder Gabe Kapler (CoachUp investor) and legendary Boston Bruins player, turned team president Cam Neely.

In a recent interview with Sara Castellanos of the Boston Business Journal, Noel said of his new appointment, “I wanted to be able to have an impact.”

“I knew how much private coaching helped me, so that’s what piques my interest.  Then after meeting with them (CoachUP), that sealed the deal.”

Noel benefitted from working with a personal coach at Tilton School in New Hampshire for his final two years of high school as well as during his time with Leo Papille’s AAU program, the Boston Amateur Basketball Club (BABC).  Of course, it has been well publicized that Noel played on a BABC summer hoops circuit team with the Sixers’ reigning NBA Rookie of the Year, Michael Carter Williams.

In addition to rebuilding his jump shot form and improving his offensive moves with coach Brett Brown during his red-shirt NBA season, Noel has been working with Mike Catapano from CoachUP and has impressed Catapano, “Nerlens has all the tools to be a great player.”

Noel who will make his 76ers debut at the Orlando Pro Summer League next month (7/5-11), appears to moving very well in the below CoachUp promotional video and in recent interviews has indicated that his knee is back to full health.

Noel recently told the Boston Globe, “The whole offseason I really focused on getting stronger, putting on weight and gaining muscle, and that’s what I did.  Every aspect and skill point, I’ve been working on, too. My shot, I’ve progressed a lot, and I’m working on my technique. Every part of my game I’ve improved on.”

“I feel like I’ve aged mentally over the past year in how I look at every aspect of life, just not taking anything for granted.  Basketball, I’ve learned a lot as well, just not being able to play, being on the bench watching guys like Tim Duncan, Kevin Garnett, Tyson Chandler, Joakim Noah — guys like that, just really picking their games apart, seeing all the little things they do and trying to implement it into my game.”

When I look at the final standings, from last year’s Eastern Conference I still throw up in my mouth (just a little), but Noel’s solid health and his confident words above give me faith that this rebuilding process is going to take a step forward in 2014-15.