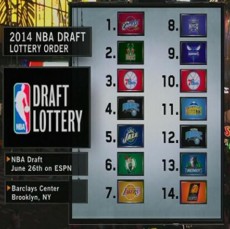 The 2014 NBA Draft is two weeks from Thursday and in case you have been living under the damaged 495 bridge in Delaware, you know that the 76ers own two (#3 and #10) Lottery slots in this draft.  Needless to say, June 26th, 2014 will be a monumental night in the history of this franchise.

In the last thirteen years, having multiple Lottery picks at the draft has also provided monumental nights for nine different NBA franchises. Unfortunately for the Sixers and Philadunkia nation, history has shown the majority of those extra special draft nights — which were once filled with so much hope and potential — have developed into monumental failures for the franchises involved.

After the jump, I’ll review the list of franchises that have owned multiple Lottery slots over the last 13 years of the NBA Draft.  Then I’ll analyze whether or not the prospects selected with those multiple Lottery picks had productive NBA careers.

Chicago Bulls:  with the No. 4 pick selected Marcus Fizer (F from Iowa State), and…

with the No. 7 pick selected Chris Mihm (C from Texas)

Orlando Magic:  with the No. 5 pick selected Mike Miller (SG/SF from Florida), and…

with the No. 10 pick selected Keyon Dolling (SG from Missouri)

Analysis:  The Bulls whiffed badly on their two Lottery picks in the 2000 NBA Draft. Fizer averaged 10.3 ppg. in 232 games for Chicago before moving on to a stint with Milwaukee in 2004-05 and then washing out of the League.  Mihm never played for Chicago as he was dealt to Cleveland for Jamal Crawford and cash on Draft Night 2000.  The big man spent 8 years in the League with a career stat line of 7 & 5 per night.

The Magic shouldn’t be all that proud of their haul from the 2000 Draft Lottery either. After a solid 2+ season in Orlando (194 games — 14.5 ppg.) at the 2003 trade deadline, the Magic dealt Miller to the Grizz for Drew Gooden and Gordon Giricek.  Dooling never suited up for the Magic as he was he traded by Orlando along with Corey Maggette, Derek Strong and cash to the Los Angeles Clippers for a 2006 1st round draft pick.

Boston Celtics:  with the No. 10 pick selected Joe Johnson (SG from Arkansas), and…

with the No. 11 pick selected Kedrick Brown (Okaloosa-Walton   Community College)

Analysis:  Joe Johnson (Brooklyn Nets), turned out to be a very good draft pick, but the Boston Celtics never benefitted much from his services.  During his rookie season, Johnson was traded to the Phoenix Suns for Tony Delk and Rodney Rodgers.  At the time of the trade, the Celtics were much more infatuated with winning than development.  Johnson went on to be a part of the exciting Suns teams which featured Steve Nash and Amar’e Stoudemire in the early 2000s.  Johnson saw most of his success with the Atlanta Hawks where he was considered one of the top scorers in the NBA.  Johnson, during his seven seasons with Atlanta, averaged 21 PPG.

Brown on the other hand has a much less distinguished NBA career.  He played in 101 total games for Boston and was out of the League four years later.

LA Clippers:  with the No. 8 pick selected Chris Wilcox (PF from Maryland), and…

with the No. 12 pick selected Melvin Ely (SG/SF from Cal State Fresno)

Analysis:  Wilcox amazed scouts and electrified fans at the college level, but never found his stride with the Clippers.  After a disappointing 4+ seasons (7 ppg.), he was dealt to Seattle.  Wilcox actually became a solid player in the Pacific Northwest for three seasons (13 ppg.) and hung around the Association until 2012-13.  The Clip-joint also missed at NO. 12 in 2002 as Ely spent two disappointing seasons with the LAC (4 ppg.) before he was traded to Charlotte for two 2nd round picks.  Ely spent this past season as a deep reserve (2 games played) with the Pelicans.

Minn. Timberwolves:  with the No. 5 pick selected Ricky Rubio (PG from Spain), and…

with the No. 6 pick selected Jonny Flynn (PG/SG from Syracuse)

Analysis:  Arguably the most notorious pooping of the pants in the history of multiple Lottery picks.  Rubio chose to stay in Spain and made the Wolves wait until the 2010-11 season to make his NBA debut.  In 180 games for Minny, the flashy Rubio has been solid (10 & 8 career numbers), but he certainly has not lived up to the pre-Draft hype as the next Pistol Pete.

Flynn took advantage of Rubio’s absence in 2009-10 and came out like a beast in his rookie campaign.  Flynn started 81 games that season for the Wolves, averaging 13.5 ppg. as well as 4.4 apg.  However during the following off-season, Flynn had surgery on a tear of the labrum in his left hip and in 20101-11, he started just 8 games for Minny and contributed only 5 ppg.   In June 2001, thanks to the nagging hip injury and personality conflicts with the Wolves staff, Flynn was traded along with Donatas Motiejunas and a 2012 2nd round draft pick to the Houston Rockets for Brad Miller, Nikola Mirotic, Chandler Parsons and a 2013 1st round draft pick.  Flynn is currently out of the League.

Cleveland Cavs:  with the No. 1 pick selected Kyrie Irving (PG from Duke), and…

with the No. 4 pick selected Tristan Thompson (SF from Texas)

Utah Jazz:  with the No. 3 pick selected Enes Kanter (PF/C from Turkey), and…

with the No. 12 pick selected Alec Burks (SG from Colorado)

Analysis: The results of the 2011 NBA Draft provided an interesting study of two teams with multiple Lottery picks.  The Cavs grabbed Irving at No. 1 who became the ROY in 2011-1 and is now a two-time All-Star.  After a simply awful rookie campaign,  Thompson has posted back-to-back seasons where he started 82 games for the Cavs and averaged better than 11 & 9 a night.  Despite the Cavs awful record during the 2013-14 season and the fact that the franchise is in the Lottery again this June (No. 1 overall), one could argue that Cleveland is the lone team in the last 13 years to get it right when faced with having two selections in the Top 12 of the NBA Draft.

Initially it seemed that the Jazz had screwed the pooch with their two selections at the 2011 NBA Draft, but this past season there were signs of hope.  Kanter and Burks struggled badly in their first two seasons in the NBA, but in 2013-14 both youngsters appeared to find their role on a Jazz team that was simply awful.  Kanter started 80 games and posted 12 & 7 a night.  Burks was a key reserve for the Jazz and provided a scoring punch off the bench (14 ppg. on 45% shooting from the field).  If this duo can continue to develop, these 2011 Lottery picks may prove to be wise choices for the Jazz.

NO Pelicans:  with the No. 1 pick selected Anthony Davis (C from Kentucky), and…

with the No. 10 pick selected Austin Rivers (PG/SG from Duke)

Trailblazers:  with the No. 6 pick selected Damian Lillard (PG from Weber St.), and…

with the No. 11 pick selected Meyers Leonard (C from Illinois)

Analysis:  Davis was a beast for the Pelicans last season and is quickly developing into the best center in the game.  So New Orleans did just fine with that Lottery selection.  However, Rivers has been a bit of an enigma and despite improved numbers in 2013-14 (7 ppg.) the undersized shooting guard has struggled to become a key player with the Pelicans.  If Rivers could elevate his game and simply become a very solid role player for the Pelicans, then this Lottery duo will be looked back on as a great success by draft historians.

For the Blazers, Lillard (20 ppg. & 5 apg. this past season) has obviously been a smashing success — 2012-13 ROY and 2014 All-Star.  However, Leonard has had a rocky start to his NBA career.  As a rookie he appeared in 69 games and contributed 5 & 3 a night — no bad for a very raw 7-footer.  In 2013-14, Leonard actually saw his role decrease, appearing in only 40 games, averaging 2.5 points in 8.9 minutes.  Despite being an athletic big, the 22-year-old’s skill set is still not developed enough to warrant consistent minutes on a very good Blazers team that plays in the highly competitive Western Conference.

Conclusion:  The evidence above supports what many of us already knew…”getting it right” with one NBA Lottery pick in a given year is very difficult and landing two prospects in a single Lottery who can contribute to a franchise is nearly impossible.  Sam Hinkie is allegedly one of the smartest front office men in the Association, so there is a glimmer of hope that he can pull two solid prospects out of the Lottery at the 2014 Draft.

Still, if I am being totally honest here I would tell you that I believe if Hinkie ends up with one excellent prospect out of these two Lottery picks in 2014, he will have done his job.  The odds so heavily stacked against Hinkie for us to be greedy and expect anything more is ridiculous.