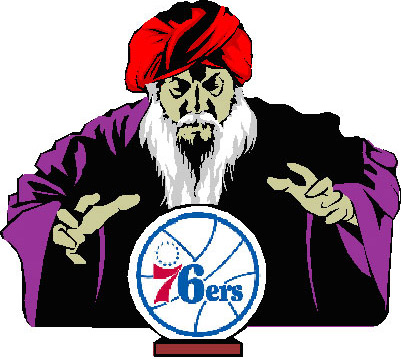 Yesterday we reviewed and analyzed the list of prospects the online “experts” are predicting the 76ers could select with the No. 10 pick in the 2014 NBA Draft.  To be honest, there weren’t any real surprises among the  “expert” forecasts and there certainly wasn’t any of the creativity Sam Hinkie showed at the 2013 NBA Draft.

So, a couple of us here at Philadunkia started wondering, “If Sam Hinkie thinks outside the box at #10 and drafts a prospect that none of the “experts” have connected to the Sixers, which player would Hinkie grab and why?”

After the jump, four Philadunkia scribes will make a prediction on a “dark horse” selection that Hinkie could roll the dice on at #10 and provide some thoughts on why Hinkie may decide to go that direction with the Sixers second lottery pick.

C. Smith:  I could see Sam jump starting Hinkie-palooza II by pulling Zach LaVine out his bag of tricks at No. 10 next Thursday night.  LaVine stands 6-foot-5, is ridiculous athlete, turned 19-years old in March, owns a 46-inch vertical leap and a 6-8 wingspan. In short, he is just the type of prospect Hinkie loves.  In his lone season at UCLA he specialized in posterizimg opponents,  but he also displayed the ability to shoot the ball (44% from the field; 37% from deep).  However, LaVine won’t increase the the 76ers odds of winning the Championship next year as he is a project.  In the skill set department his passing is suspect and his shooting can be streaky.  He’ll also need to hit the weight room and improve in the physical department as well (he’s a lean 180 lbs.).  There are also some questiosn as to which position (SG/PG) he will play in the NBA.  So the Sixers will need to develop this raw prospect properly over the next year or two.  But in the words of Jay Bilas, “his upside is ridiculous”, so I wouldn’t be totally shocked to hear his name called at No. 10.

Jeff McMenamin:  As I’ve stated before on this site, if the Sixers go for a big man like Noah Vonleh or point guard Dante Exum with the No. 3 pick in the draft, they should look for a wing with a scoring prowess at pick No. 10.  The guy who fits that description the most in my mind is Rodney Hood.  On June 11, the Sixers brought in Hood for a workout and he’s a guy that I believe fits the Hinkie mold.  At 6-foot-8 and 208 pounds he’ll need to add a good amount of muscle in the off-season, but he has the perfect measurements for an NBA wing and he can shoot the lights out.  He averaged 16.1 points, 3.9 rebounds and 2.1 assists last season for Duke and shot an astounding 42 percent from beyond the arc.

Michael Kaskey Blomain:  I had a hard time deciding betweeen Dario Saric and James Young for this post.  I finally decided to go with Young from Kentucky as a darkhorse pick for the 7-6 because there’s a real chance Saric will be gone by the time the 10th pick rolls around.  Additionally a number of mock drafts have Hinkie grabbing Saric at #10.  Young has dropped down draft boards recently, but I continue to believe that he would be a solid fit with the Sixers.  At 6’6’’, Young has great size for the shooting guard spot, and could fit in the backcourt nicely alongside Rookie-of-the-Year Michael Carter-Williams.  Young would fit especially well if a go-to perimeter player like Wiggins or Parker is selected with the third-overall pick.

Young is an excellent shooter that would work to space the floor for MCW and the Sixers’ third selection.  He is an excellent three-point shooter and can knock down shots both off the dribble and off of catch-and-shoot.  At only 18, Young has a lot of development left to do, and I believe that he can really develop into a solid NBA scorer.  Another thing about Young is his ability on the defensive end.  Young was Kentucky’s best defensive perimeter player last season, and his length and speed project to allow him to be a good-to-great perimeter defender in the NBA as well.  Brett Brown and Hinkie alike would appreciate Young’s ability on both sides of the ball, and while he might be a slight reach at ten, he could be a solid selection for the Sixers.

Rich Iacuzio:  I wouldn’t be surprised if Zach LaVine was the pick at #10.  His athleticism and explosiveness may be too much for Sam Hinkie to pass on come draft night.  LaVine also possesses tremendous speed and quickness, which would fit nicely into the team’s quick-paced offense.  The guard out of UCLA also has shown the ability to put the ball in the basket from beyond the arc.  He has all the tools to become a good combo guard in the NBA, but experts believe that whoever drafts him will need to be patient with their investment.  LaVine would be a great pick up for the Sixers, as they have the time to develop his game.  They can afford to watch him grow on the court because they are still involved in a full-rebuild.  Zach LaVine might be the surprise that Sam Hinkie has in store for us at the NBA Draft this year.

Tyler Cook:  My dark horse at number ten would be Dukes stretch forward Rodney Hood. Most mock drafts project him to go number thirteen to the Timberwolves.  Hood fits the NBA mold at 6’8″ and weighing in at 208 lbs.  He has an excellent long ball among the top percentage in his draft class making 71 of 169 shots behind the arch last season for Duke.  Hood is also a freakish athlete who has the ability to be a good spot shooter and can also be beneficial as a shooter off the dribble.  Hood can be compared to Thaddeus Young in position and skill context.  Hood could also be used as a stretch four if Thaddeus Young was to leave the Sixers, possibly saving some salary for the team.