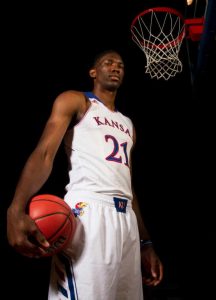 With yesterday’s breaking news, that is the question.

As you know by now, Joel Embiid, the projected 1st pick in the 2014 NBA Draft has a foot fracture and will have surgery today to repair the injury.  Thursday’s headlines sent every team with a Lottery pick this year scrambling to reconstruct their Draft plans and asking, “Is Embiid worth taking a gamble on with a Top 12 pick?”

Embiid’s injury presents a very interesting dilemma for Sam Hinkie the 76ers, who as we all know have two Lottery selections next Thursday night (No. 3 & No. 10) and thus will likely have two opportunities to draft or pass on the athletic, but injury prone, 7-foot center from Kansas.

So we put two questions to the scribes here at Philadunkia…

Answers and ideas after the jump.

1) If you were Sam Hinkie and Joel Embiid is available when the 76ers are on the clock at No. 3, would you select the injured center?

Michael Kaskey Blomain:  No.  I would not go near Joel Embiid with the third overall pick in the Draft.  I was skeptical about his selection prior to the foot injury, and now he just presents too big of a risk for the rebuilding Sixers.  They cannot afford to miss on their top-5 pick, and big guys with injury issues are just too risky, especially when talking about back and foot injuries.  With Noel and a developing Henry Sims, the Sixers don’t need Embiid, especially considering the shift to small-ball and stretch forwards that the league is experiencing.

Also, not that this would necessarily play into Sam Hinkie’s selection, but it would be asking quite a lot of the fanbase to accept yet another injured big man who may have to sit a season.  On the heels of the Bynum debacle, and then Noel’s season on the sideline, selecting another big with injury issues who will have to sit on the sideline will be really pressing the patience of the fanbase.

C. Smith:  Bill Walton.  Sam Bowie.  Yao Ming.  Greg Oden.  Andrew Bynum.  These are just a few of the highly talented big men in the history of the NBA who’s careers did not reach their maximum potential or were derailed all together because of frequent injuries.  At No. 3, the 76ers absolutely must land a player who can contribute to the rebuilding process next year and be a building block for years to come. Thus, there is no way that common sense even in the world of advanced analytics — that Hinkie can take a gamble on a 7-footer with foot and back problems who was described to me by one NBA front office person as appearing “brittle”.

Additionally (And I know Hinkie does not care about this at all.), I agree with my colleague MKB, after Bynum and Noel, asking Philadunkia nation to watch the No. 3 pick in the 2014 Draft sit on the bench in a Boyd’s suit for a large portion of the 2014-15 season is simply cruel.

Rich Iacuzio:  If Joel Embiid slides to the third pick in the Draft, I think Hinkie will have a hard decision to make.  Ultimately, I think Sam Hinkie will pass on Embiid.  Joel surely has franchise-altering capabilities, but he seems too risky to draft, especially now with all of his accumulating injuries.  Another reason why I think Hinkie will pass on him is due to his own experiences in Houston.  While in Houston, Sam Hinkie saw Yao Ming’s career end with the same injury that hinders Embiid today.  Knowing this, I think Hinkie will stay away from Embiid.  Now, call me an optimist, but I there still is a chance that Wiggins makes it to our pick.  Bill Simmons believes Parker will be taken by the Cavaliers because he will contribute right from day one.  Chad Ford has also mentioned that the Bucks think very highly of Dante Exum, and have had him in front of Wiggins on their draft board.  So, with a combination of Hinkie’s past experiences and the pending availability of Andrew Wiggins, I believe the 76ers will pass on Embiid.

Tyler Cook:  If Embiid is still an option at No. 3 I think the Sixers should pass on the big man.  The Sixers already have a first round big man in Nerlens Noel who was drafted sixth in the 2014 Draft.  With Noel expecting a promising return the Sixers should focus on an offensive weapon instead of another injury prone center.  Assuming that Andrew Wiggins would move to the 1st pick and Jabari Parker would follow as the 2nd pick, Hinkie will still have plenty of options at No. 3.

The first pick for the Sixers should be Julius Randle out of Kentucky.  Randle sports an enormous frame standing at 6’10” and weighing 250 lbs.  Simply put he is a punishing freight train. Randle has great footwork for a man of his size allowing him to drive and create shots.  His creativity makes him a huge threat at the mid or low post where he has multiple advanced moves such as a quick jab step or crossover.  He has proven to be a durable and reliable offensive threat at Kentucky where he averaged fifteen points a game last season.  As well as being a scoring machine, Randle average ten rebounds a game last year for Kentucky proving he is a dual threat.

1) If you were Sam Hinkie and Joel Embiid SOMEHOW is still available when the 76ers are on the clock at No. 10, would you grab the injured center?

Michael Kaskey Blomain:  If Embiid somehow slides to the 76ers 10th pick, I think they will take a chance on him.  If you saw last year’s draft, you know that Hinkie likes to gamble.  Embiid would certainly be worth the 10th pick in the draft.  If healthy, Embiid could play alongside of Nerlens Noel.  The combination of both of these players could become our version of Duncan and Robinson. Of course there is a risk in selecting Embiid, but at the 10th pick in the draft, the reward would certainly outweigh the doubt.

C. Smith: If Embiid slips all the way to No. 10, Hinkie could be looking at the toughest decision he will face as the GM of Philadunkia’s home team.  At. No. 10 I believe the Sixers desperately need to land a shooting guard with 3-point draining skills who can finally give the 7-6 a scoring threat at that position we haven’t seen since Hersey Hawkins.  However, I understand that down the road, a hopefully healthy Embiid could potentially be a franchise changing caliber player for the Sixers or any team. Thus, if I am Hinkie I would be willing to take a gamble on him at No. 10 under one condition.  That condition would be that I was able to put together a package of 2nd round picks  (and maybe Thad, but hopefully not) that allowed the Sixers to “get back into the 1st round” by acquiring a third selection.  With that additional 1st round pick, I could then secure a much need shooting guard.  So under those guidelines, I would take Embiid at No. 10.  Otherwise, I pass — AGAIN.

Rich Iacuzio:  If Embiid somehow slides to the 76ers 10th pick, I think they will take a chance on him.  If you saw last year’s draft, you know that Hinkie likes to gamble.  Embiid would certainly be worth the 10th pick in the draft.  If healthy, Embiid could play alongside of Nerlens Noel.  The combination of both of these players could become our version of Duncan and Robinson.  Of course there is a risk in selecting Embiid, but at the 10th pick in the draft, the reward would certainly outweigh the risk.

Tyler Cook:  When looking at Embiid two words have to pop up in your mind, “injury prone”.  The Kansas 7-footer has only been playing basketball for a short amount of time and has already been plagued with injuries that can often be devastating for a big man. In his short basketball career Embiid has suffered through a knee injury, a severe back injury that forced him to sit out of the NCAA tournament last year with Kansas, and now the foot fracture that some doctors are saying could take a while to heal because the navicular bone is amongst the slowest healing bones in the body. As I stated previously, the Sixers have a promising prospect at the center position in Noel.

Instead I think the Sixers should use the No. 10 pick and draft a solid wingman with a scoring mindset like UCLA’s Zach LaVine. LaVine has tremendous athleticism, which allowed him to make a career at UCLA in the open floor.  LaVine is also an excellent shooter.  The 6’6” guard has the ability to shoot of the dribble, come off a screen, or even drain the long ball.  Last year at UCLA LaVine hit 43% of his three point attempts, showcasing his smooth shot with an absurd amount of confidence.  LaVine can throw it down or shoot the lights out, which is why the Sixers should take him at No. 10 if he is available.