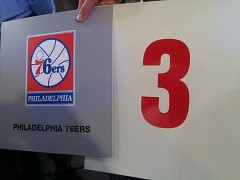 We have reached the “sources say” portion of NBA Draft week, which means right now there are more lies and misdirections floating around the rumor mill than Swaggy P photos on Instagram.

Even though Hinkie is the most tight lipped GM is the League, he isn’t immune to the sources syndrome that has kicked into hyperdrive in the last 24 hours.  Multiple reports have the 76ers sticking at No. 3 and drafting either Dante Exum or Joel Embiid.  A number of other reports claim the Sixers are desperate to move up and are working hard to make that happen on Thursday night. One thing is for sure, the 76ers and their front office people will be in the spotlight at the 2014 NBA Draft.

So, we asked our scribes to assume Sam Hinkie’s role for a minute and submit ideas for both scenarios.

Answers and ideas after the jump.

Jeff McMenamin:  This all depends on who’s selected at No. 1 and 2.  All the reports and rumors going around have analysts in a frenzy.  Apparently Jabari Parker is the Cavs’ top option and the Milwaukee Bucks are most interested in Dante Exum at No. 2.  I just don’t believe that you can let Andrew Wiggins slip to No. 3 at this point.  I have the Sixers selecting Indiana’s Noah Vonleh at No. 3, strictly because I don’t see Dante Exum fitting with the current team.  I’m one of the believers that in order to draft Exum, you must trade away MCW. Barring a trade and Wiggins falling, the Hoosiers power forward is my pick at No. 3.

C. Smith:  Obviously there is some grey area here as we are not certain what Cleveland and Milwaukee are thinking and who will be left on the board at No. 3. That being said….I still think that Embiid will go #1 to Cleveland as they are simply desperate to find a talented big man and based on the reviews I have read on Embiid’s “secret” west coast workout, I believe that he could be a franchise changing center.  So, the Cavs will roll the dice on the injury front and grab Embiid at No. 1. The Bucks will then grab Wiggins at No. 2 and Parker falls into the 76ers lap at No.3. Parker’s polsihed offensive game can contribute right away, but he can’t carry a franchise yet, so Hinkie’s plan of ending up in the Lottery again in 2015 won’t be in danger.

Rich Iacuzio:  I believe that if the Sixers stay at #3, they will take Dante Exum.  The mystery point guard has plenty of untapped potential.  Exum, while playing Down Under and for Australia on the International scene, has convinced some scouts to believe that he is the second coming of Kobe Bryant.  I think Exum has a way to go to live up to those expectations, but if he can reach his ceiling, he can be exactly what our team needs.  Also, I believe if Exum is our guy at #3, I think MCW will be shipped to the Lakers for the 7th pick.

Tyler Cook:  If the 76er’s let things stand and end up with the No. 3 pick, Dante Exum would be the most beneficial choice for the team. The Aussie has great athleticism and looks the NBA part standing at 6-6.  Though he may not be a sharp shooter from distance, Exum creates chaos with his ability to get to basket and draw fouls. The combo-guard makes a living off finishing through contact and scoring with either hand. Dante Exum excelled scoring 18.5 points a game over seas in Australia. Exum not only creates opportunities for himself off the dribble but also draws defenders in, which opens up the floor for his teammates to have a scoring chance. Constantly having defenders off balance would seem to be an easy opportunity for Michael Carter-Williams and big man Nerlens Noel to get involved in the scoring frenzy. The main weaknesses are his outside shooting and the lack of quality competition Exum has seen, but that’s something a couple years in the NBA can fix.

Jeff McMenamin:  The Sixers will trade No. 3, No. 10 and Thaddeus Young to the Cavs for No. 1 and Anderson Varejao. It makes sense for the Sixers who’re linked to ‘covet’ Andrew Wiggins as their top selection and it gives the team a serviceable power forward in Varejao for the rest of the season. The Cavs get two lottery picks and an athletic big to run the floor with Kyrie Irving and Dion Waiters.The Sixers aren’t expecting to win much in 2014-15 so getting the face of their franchise in Wiggins could be their No. 1 priority. They’d have a shot in next years draft of getting a top power forward to pair with Nerlens Noel like Cliff Alexander or Karl Towns with a potential top five pick.

C. Smith:  I am going to cheat on this question a good deal as after a host of research and phone calls, I believe the Sixers will stay at No. 3 and make a pick in that slot.  However, Hinkie will will make a big splash like a party poker bonus code, when he trades back into the Top 7 picks of the 2014 NBA Draft.  For instance, how about a trade where the 76ers send their 10th and 39th picks, plus a 2nd round pick in 2015 to the Lakers for the No. 7 slot. At No. 7, Hinkie can select either Julius Randle of Nik Stauskas.  Both prospects would fill holes on this roster immediately.

Rich Iacuzio:  On draft night, I think the sixers will trade up to #1 using both of their picks and Thaddeus Young.  With that pick, I believe they will go on to select Andrew Wiggins.  I think this will be the move because of a couple reasons.  Thaddeus Young will almost certainly opt out of his contract after the 2014-2015 season, so the Sixers need to capitalize on him as a movable asset while they still can.  I also believe the Sixers are very interested in Wiggins, and will ultimately sacrifice the 10th pick to get him.  I think it is imperative for the sixers to trade up and draft their guy.  I’d rather have just Wiggins than Exum and #10.

Tyler Cook: Every front office dreams of their team having the No. 1 overall pick and if Philadelphia was to make a move in the draft that would be what the 76e’r are shooting for.  The best move in Philly would be to trade their first round picks (No. 3 and No. 10) to Cleveland in return for the No. 1 pick and Dion Waiters. Waiters, an upcoming shooting guard who has proven himself with his year with the Cavs, averaging 15 points a game alongside Kyrie Irving would return to play for his hometown Sixers.  That leaves Philadelphia with the first pick in the draft. Hinkie should select Andrew Wiggins the stretch forward out of Kansas.  Wiggins brings unbelievable offensive potential and would change this organization instantly.  He is an all around threat playing alongside MCW and an unseen talent in Noel.  Wiggins has the ability to light up the Wells Fargo Center with his athleticism on the floor. It should be an easy decision for the front office to take this kid and let the scoring and Philly begin!