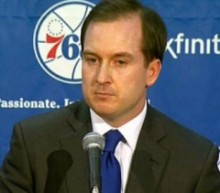 You have been dating a woman for a significant period of time — let’s say 9 months.   She has some issues that need work, but overall the gal is cool.  There have been some bumps in the road along the way.  However, as a whole things have gone fairly well and you really like the long term potential of the relationship.

As you approach the relationship’s one year anniversary (June 2013 to June 2014) you plan a special night for the two of you.  It has been communicated to you (although not verbally) that she too is excited about this big happening (Draft night 2014) and that your loyalty and time over the last year will be greatly rewarded.

The night goes perfectly and as you arrive back at your place, she heads into the bedroom to change into something “more comfortable”.  When she returns your gal has on flannel pajamas.  Next she heads to the fridge and grabs a pint of ice cream.  Then she plops on the couch and puts on a chic flick.

Needless to say you have mixed emotions.  On the one hand, you’re getting no satisfaction tonight (Freakin’ tease).  You’re also confused as to what just happened and whether or not the two of you are on the same page at all.  On the other, you still have this great woman and you’re in a seemingly solid relationship with tons of long term potential.

The long view, hoop head in me realizes the following:

— The Sixers were horrific last year and will be awful in 2014-15, but at least they’re awful with a defined plan.  That’s something we haven’t been able to say in 15 years and most teams in the League can’t boast.

— Sam Hinkie turned Jrue Holiday into three 1st round draft picks. I was a big supporter of “The Jruth” but I have to say that the end game Hinkie achieved on that deal was simply genius.

— At No. 3, Hinkie was able to pick up the most talented, highest rated player in the Draft who also has the greatest “upside” without trading a single asset.  While there is no doubt that Embiid’s injury history makes taking him at No. 3 a bold and risky move that could backfire if Embiid wears a suit more often than a uniform, at least Hinkie took the gamble without going “all in”.

— The trade with Orlando for Dario Saric allowed Hinkie to get the player he really coveted at No. 10 and pick up an additional 1st round draft pick in 2017.  Yet another asset is added to Hinkie’s bag of magic tricks.

— When Dario Saric is done ballin’ in Turkey and returns to the 76ers, MCW, a hopefully healthy Embiid and Nerlens Noel will all be 23 years old. They will then have a couple years of experience under their belt and the Sixers will have $40 million in cap space to attract a free agent or two to Philadelphia.

The knee jerk reacting 76ers fan inside me has the following rants:

— The Sixers did absolutely nothing last night to get better for the 2014-15 opener. I’m not saying we had to take huge leaps at Darft14, but some small step to improve in 2014-15 would have been nice. With an injured Embiid likely sitting out all of 2014-15 and Saric playing in Turkey next year (and likely one more), the dreaded “double tank” is officially on. Thus, the 76ers will be the laughing stock of the League again next season.  It was very difficult to deal with last season and I am not sure I can handle a replay in 2014-15.  If you are interested in NBA betting, bet that the 76ers don’t win more than 20 games in 2014-15.

— You cannot rebuild forever.  At some point you have to give the appearance like winning matters as much as “gathering assets”.  Follow me for a minute…You need to win a good deal of your games to qualify for the NBA Playoffs. You need to be in the Playoffs to have a chance at making the NBA Finals.  You need to be in the NBA Finals in order to compete for the Larry O’Brien trophy.  The 76ers are at least 2 years away from the winning enough games to make the playoffs, so how many years will it be before they compete for a championship?

— The most irrelevant sports franchise in this town just got more irrelevant. The 7-6 are currently the fourth most important sports story in this town and last night could have been the launching point for their push to become relevant again. Instead, the franchise gained no momentum from an NBA Draft in which it had not one, but two, picks in the Top 10.  That’s soooo Sixers.

— Can you imagine having to work in ticket sales for this team?  Do you think marketing guru Scott O’Neil is in the fetal position this morning wondering why he took a job with the 76ers?  I wouldn’t want either of those gigs right now.

— The 76ers were simply brutal to watch on offense in 2013-14 and statistically were among the worst offensive teams in the history of the NBA history.  Featured in the Sixers’ historically woeful offense was the worst 3-point shooting percentage in the Association (31.2%).  Yet, Hinkie chose not to draft a single player who can score the ball or shoot the three for this team next year.

— The 76ers perimeter defense was beyond pathetic last season, but instead of drafting a SG or SF who can defend and score some, Hinkie selected an injured, 7-foot, shot blocking center and a Croatian small forward who is a defensive liability.