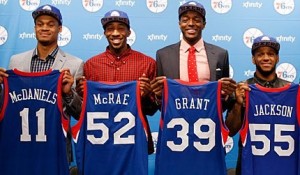 Philadunkia nation fan there is very good chance that we won’t see our first round talents from the 2014 NBA Draft suit up for the team this year.  With Embiid nursing his broken foot for the next six to eight months and Saric playing in Turkey for at least the next two years, the only prospects from Draft14 we’ll see on the court next season will be those Sam Hinkie selected in the second round.

When all the wheeling and dealing was done last Thursday night, Hinkie ended up bringing home four 2nd round selections, and with the double tank…I mean…another rebuilding year coming up 2014-15, it’s highly likely that this group of second round picks will make the Sixers’ roster and one or two of them may even play significant minutes for Brett Brown this coming season.

With the 32nd selection of the 2014 NBA Draft, the Sixers selected KJ McDaniels from Clemson University.  The SF, considered a 1st round talent coming into the draft and was a steal for the Hinkie in the early 2nd round.  One thing that fans will like about McDaniels’ game will be that he thrives in an up-tempo style of play.  His defense leads to transition buckets as well.  Many scouts believe that his game is somewhat similar to that of Kawhi Leonard.  Coming into the League Leonard was considered more of a defensive player who needed to grow into his own on offense.  The same can be said for McDaniels.  If he can improve his shot, he could become a very valuable asset for Sam Hinkie and Co.

With the 39th pick in the draft, the Sixers selected Jerami Grant.  The Syracuse forward has drawn comparisons to Thad Young thanks to his current body type and skill level.  Grant is a special talent, because of his physical tools and athletic ability.  Like Thad, Grant can be considered a hybrid forward.  His quickness and agility can be used to create mismatches against a good number the League’s slower forwards.  Grant seems to strive in transition opportunities as he converted 68% of his FGAs on transition plays.  That is great news, Sixers fans.  Grant, during his first couple seasons with the Sixers will get playing time due to his crazy athleticism and aggressiveness.  He is a work in progress, but he has a chance to contribute in 2014-15.

One of my favorite moves in the 2nd round of the draft occurred when the Sixers traded their 47th pick (Russ Smith of Louisville) to the Pelicans for the rights to Pierre Jackson.  As you may recall, Hinkie drafted Jackson with the 42nd pick in the 2013 NBA Draft and dealt him the Pelicans as part of the Jrue Holiday trade.  Jackson spent most of last season in the D-League, where he averaged 29 ppg. for the Idaho Stampede.  Pierre can surely help the team this year, especially on the offensive side of the ball.  Even though he is a bit smaller side for a lead guard, he knows how to put the ball in the basket.  He also can facilitate on offense as well, averaging over 6 apg. during his time in Idaho.  I’m sure Pierre will be very exciting on the court for us this season.  I think we’ve found a nice back up for Michael Carter-Williams.

The first international prospect taken in the 2nd round for the Sixers was Vasilije Micic, the PG out of Serbia who was ranked #4 on the International prospect list.  Known for his tremendous passing skills, Micic will be a steal if he ever comes over to American to compete in the NBA.  Micic has great for a point guard.  Being 6’6” will help him see over defenses and make incredible passes.  Hopefully one day Micic will make his way over to the Association so we can have the chance to see his superior passing ability.

With the Sixers final 2nd round pick in the 2014 NBA Draft, Hinkie selected Jordan McRae. The Tennessee senior is another athletic guard who can shoot the ball with consistency.  McRae has a chance to be a good player in the NBA due to his quickness, athleticism, and shooting ability.  McRae averaged 18.5 PPG during his senior season as Tennessee.  With all of the uncertainty around the team’s roster, McRae has a good chance at becoming this 2014-15’s version of Hollis Thompson.

Hinkie did a tremendous job with all of the franchise’s second round selections at the 2014 Draft.  One trend that we are beginning to see is that Hinkie really enjoys stockpiling athletic guards.  With the amount of playing time that could be available during another rebuilding campaign, some of these players will receive quality minutes this season and have a chance to prove they belong in the League.  Hopefully some of them will be able to develop into consistent players for the future.

Overall, I’d give the Sixers a “B” for their 2nd round picks and I look forward to seeing who in this group can contribute to the 76ers over the long haul.