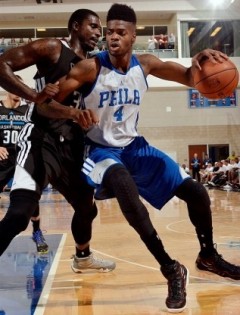 For Philadunkia nation, the Orlando Pro Summer League is worth watching for many reasons.  We get the chance to see our 2014 high 2nd round draft picks take the floor.  We get to see Travis Bader, the 3-point specialist, fight for a spot on the team.  Fans also get to see the emergence of high-flying, St. Joe’s product Ronald Roberts, Jr. making highlight reel plays.

All of these players are reasons why fans are tuning in to watch the 76ers in Orlando, but these rookies aren’t the main attraction.  What keeps fans glued to the television is the mystery that is Nerlens Noel.

The defensive center finally took the floor on Saturday afternoon for the 76ers after a year of rehabbing a torn ACL.  The debut of Noel was a sight for sore eyes, especially for Sixers fans, who struggled through the team’s 19 win season in 2013-14.

Not known for his offensive touch, Nerlens did a great job in his first action of the summer, finishing with 19 points and 4 steals.  .  Noel’s summer league debut was great, but what can we expect from him during the regular season?

Nerlens, still being quite raw on the offensive side of the ball at this point in his career, will surely need to work on his offensive game during the season.  As the season progresses, expect Noel to continuously work on his 10-15ft jump shot.  If Noel can add a consistent jump shot to his game, he can become a dangerous option on offense.

Noel, who is known for his defensive potential, will definitely make a immediate impact on that side of the ball.  One thing that I noticed in his first game of the OPSL is that he was very active on defense.  His lanky body type gave him the ability to completely disrupt Orlando’s pick and roll offense.  In the paint, each shot that went up against him was heavily contested.  This season we’ll get the chance to see something that sixers fans haven’t seen in awhile, a rim protector.  Get excited.

The return of Nerlens Noel will bring new life within the fans and organization.  His explosiveness and defensive potential will be something special to watch for during the NBA season.  With all of that being said, how much can he contribute to the team this season?  One player I look to when trying to predict Noel’s first season on the court is Joakim Noah.  Noah had a similar skill set to Nerlens when coming out of Florida.  Not much of an offensive threat, Noah averaged 6.6 PPG during his rookie season.  In 20.7 MPG, Noah shot 48% from the floor, grabbed 5.6 RPG, and averaged under a block per game.  While looking at these numbers, I think Noel can average similar, but better numbers in his first NBA season.

I believe Nerlens’ numbers will be somewhat higher than Noah’s rookie year mainly because Noel will be on the court more than 20 MPG.  For the season, I think Nerlens will average close to 12 PPG on 50% shooting.  Since his jump shot is a work in progress, I believe most of his points will come from within 5 ft. of the basket.  One stat that may be similar to Noah’s rookie campaign can be found in the rebound column.  I believe Noel will average about 7 RPG.  Noel surely has the potential to grab more rebounds, but due to the lack of his weight, I believe he will have a hard time with heavier, stronger NBA centers.  During the 2014-2015 NBA season , Nerlens will see most of his impact on the defensive side of the ball.  I fully expect Noel to average close to 2 blocks a game.  His length and defensive awareness will help him protect the rim for the 76ers this season.

Now that I’ve given you what I believe to expect from Nerlens this season, how will his contributions affect the team this year?  Noel is a great talent, but there isn’t much talent around him to get this team to 30 wins this season.  I believe, with the addition of Noel, the team will see little improvement in the win column this season.  As the 2014-2015 NBA season comes to a close, I think we’ll see the Sixers with 20-25 wins and an excellent shot at the #1 pick in the 2015 NBA Draft.