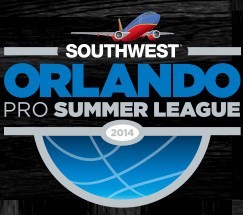 “Tyler, you always get to the airport 2 hours before your flight…ALWAYS.” That’s the wise words of my old man for you. With the Orlando Pro Summer league ending and my journey back home beginning I have a lot of time to think about each Sixer individually and how they preformed this past week.

Nothing is certain in professional sports, especially the guys that are playing their hearts out just to be invited to training camp. That being said the 76ers Orlando summer squad played surprisingly well and it will be interesting to witness how they perform in Las Vegas.  But before we movbe on to Sin City, let’s wrap up the action in O-Town.  Without further delay here is my assessment of the individual players and how they faired down here in Florida.

Casper Ware – Without any questions this guy has been the most outstanding player on the 76ers roster for the OPSL tournament. He has led the team in scoring every game and has been impressive on all sides of the ball.  Ware is a natural leader with great court vision.  He provided open looks to his teammates throughout the week and added a deadly floater shot to his game that has racked him up points down here.  His coaching staff has noticed him too, even being called “our everything” by assistant coach Pierce. “I wanted to come out here and show I can play and get better”, Ware said about his performance this week.  Ware, who isn’t guaranteed a spot by the Sixers by any means said that he has been in touch with his agent and has been told that he “raised some eyebrows” in the OPSL tournament.  I would think the 76ers would be wanting to keep him close to see if he can continue his success.

OPSL Grade:  A.  He has done everything for the team this week especially with Aaron Craft not being much of a back up.  Ware is fighting for a roster spot only signing a ten-day contract with the Sixers.  Ware must have made an impression as he was asked to join the team in their second summer league appearance out in Las Vegas this upcoming week.

Nerlens Noel – The big man had a great debut down here in Orlando and has been impressive when he got the chance to play.  The Sixers were real cautious as to playing time of their star center.  Noel showed that he could play at this level after taking 18 months off until this summer.  He is a tremendous shot blocker and has the ability to make electric plays when he is in the game.

OPSL Grade:  B.  Noel played well when he got the chance but there were a couple things the big man could work on.  First was his conditioning.  He always seemed to be winded throughout the game. Being conditioned is just something that is expected out of a professional athlete.  The next thing would be his rebounding. He often got out powered down low fighting for boards.  I think he should really focus in gaining healthy weight that will allow him to bang down low with other big men in the NBA.

KJ McDaniels –  I like what I saw out of McDaniels this week.  He is a good prospect and someone who I believe will be a good player in this league with just a couple years experience.  KJ showed his ability to play above the rim and also shot the ball well this week.

OPSL Grade:  C.  Despite getting hurt McDaniels was able to show the talent he had.  He is an excellent player who is aggressive when attacking the rim.  He did not play in the championship game and depending on his ankle may or may not play a lot in Las Vegas.

Travis Bader –  This kid was absolutely lights out down here.  Bader has a great shot and has been in a scoring frenzy in this tournament.  He has the ability to knock a shot down and has great confidence in his shot. He also has great ball control and makes good, smart decisions on the court.  He quietly has been helping take the pressure off of Ware by being a reliable ball handler. Bader isn’t afraid to take a shot either and he has one of the smoothest stokes I saw down here.  I thought Bader had an excellent showing.

OPSL Grade:  B.  His size is something that might be going against him but he did have a great showing here in Orlando.  Bader is a great three-ball shooter and I’m interested to see what will happen to him as he progresses.

Hollis Thompson –  Thompson has improved his game tremendously since last season and he has had a decent showing down here this week.  He is a good role player and excels in getting rebounds.  Thompson said he wasn’t shooting how he would like to be in this tournament but its something that will eventually happen.  He had a great championship game and was the leading scorer, racking up 21 points. Another big part of his game was beefing up and putting some muscle on. “I’ve definitely been lifting a lot trying to just put some weight on. I’ve put about ten pounds on this summer”, said Thompson when asked about his stature. Anytime a player can put healthy weight on and get stronger tremendously helps your basketball game in my opinion.

OPSL Grade:  B.  He continues to improve and work on his game I think he could be a beneficial player on their roster. His shooting is something that he has too work on as well as is transition defense, which was lacking during the tournament. Also he was a little inconsistent but if he keeps playing and practicing I would worry about it transitioning to his game as the regular season approaches.

Ronald Roberts, Jr. –  Roberts had a big week showing that he has all the tools in his arsenal to play at this level.  Roberts showed great poise on the court.  He has an excellent post game and is very physical down low. He goes strong to the rim when he catches it down low.  He also showcased his air game.  Roberts was known to be a high flyer and had some big dunks for the 76ers.  He also proved that he is durable, playing a lot of minutes each and every game Philadelphia had scheduled.

OPSL Grade:  A.  I think he should be fighting for a real shot at a roster spot. He had a good week and played well. He can score and play defense.  Roberts also average 12 points a game down here.  I think he is a good teammate often caught joking in warm-ups with the other teammates.  If he continues to improve his game he will be a good player in a couple of years.