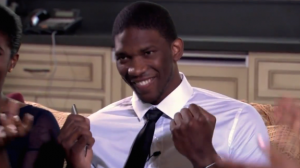 Sixers rookie Joel Embiid might not suit up for the team this season, as he recovers from surgery to repair the navicular bone in his right foot, but for now fans of the player have been thoroughly entertained by his Twitter presence in this past month.

Hey I want you to come slide in my DMs @KimKardashian

I must go on another break peace

At 7-feet-0, 250 pounds Embiid is regarded as one of the top center prospects of the past decade. He’s expected to miss the next 6-8 months as he recovers from foot surgery. Just like in person, he’s a can’t miss follow on Twitter as his comedic routine seems to be gaining strength daily.

What will he say next?