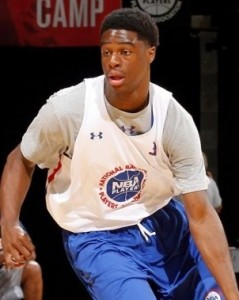 Who is Emmanuel Mudiay?

With Sam Hinkie executing the double tank for 2014-15 in hopes of securing yet another high lottery pick in the 2015 NBA Draft, it’s time you learned his name and his game.

Arguably one of the best high school point guards in the Class of 2015, Emmanuel won’t be seen by the casual basketball fan this upcoming fall.  Instead of playing for Sixers’ legend, Larry Brown, at SMU this season, Mudiay will be headed to China to play professional basketball.  The 6-5 guard would’ve been plenty fun to watch at the collegiate level this upcoming season.  Some have compared the electric guard to both John Wall and Russell Westbrook.

Mudiay is considered a true point guard who possesses tremendous speed.  Being as tall as he is, 6-5, he has the ability to look over opponent guards.  This gives Emmanuel the ability to see the entire floor, which can ultimately lead to great floor vision and potential matchup problems for the opponent.  Another reason why Emmanuel is such an intriguing prospect is due to his ability to attack the rim.  Mudiay uses his quickness and explosiveness to attack the rim with force.  His ball handling is another reason why Emmanuel will be one of the top selections in the 2015 NBA Draft.  He combines his quick first step with various crossovers to get where he wants on the court.  Being close to 200 lbs, Mudiay finishes his drives to the basket with explosiveness and power.

Another thing that I noticed while watching Emmanuel in game action was that he loved to get his teammates involved.  And as a true point guard, that’s really great to see.  His competitiveness shows, and as he continues to grow as a player, this will only help him get better.  For a point guard, Mudiay has great size and length.  His physical gifts and quickness will surely help him develop into a respectable defender at the next level.

Even though Mudiay has the potential to be a great player at the next level, there are plenty of holes in his game which may hinder him during his first few seasons at the professional level.  One thing that Emmanuel will have to get better at is his shot off the dribble.  If Mudiay can consistently shoot off of his deadly first step, it will help his game get to the next level.  Another part of Mudiay’s game that needs some work can be found in his outside shooting.  During his run in Nike EYBL games last spring, Mudiay only shot 6-41 from three-point range.  If Mudiay cannot solidify his outside game, pro guards will sag off and force him to shoot.  Another problem for Emmanuel is that he is extremely turnover prone.  One reason why he was ranked #1 in turnovers during the EYBL is that he tried to do too much.  Mudiay has the tendency to try to do too much on the offensive side of the ball.

Overall, Emmanuel has the potential to become one of the best players in the 2015 NBA Draft class.  His athletic abilities clearly make him a must-watch player this upcoming fall.  Since he’ll be playing overseas, it’ll be difficult to track his progress.  During the season, while you’re watching college prospects on ESPN, be sure to Google Emmanuel Mudiay from time to time.  Chances are you’ll see him lighting up the professional competition overseas.