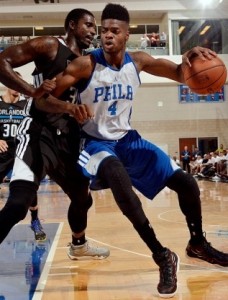 There is no denying that the relationships between NBA players on and off-the-court has changed over the last 15 years.  In this era of AAU basketball, powerhouse sports agents, mega sneaker contracts and social media, the majority of today’s NBA stars are well connected to each other and former players.  Thus, they have no problem texting an on-the-court rival for advice or working out with a division foe in the off-season or reaching out to a retired hoops legend in order to learn a new move.

Magic, Larry and Mike would never have dreamed of doing such things.

Again, times have changed and so today we are launching a new series here at Philadunkia.com that works off the above premise regarding current NBA players and applies it to the members of the 76ers roster.  Which current and/or former players should key members of the Sixers pursuit gym time with in order to develop and improve their game outside of Brett Brown’s watch?

If Nerlens Noel were to take this approach, these are the four players I would like to see him work with and learn from:

Hakeem Olajuwon:  Hakeem seems to be the big that every young player wants to work with, and for good reason.  Olajuwon possessed some of the best footwork ever for an NBA big, and he had a very deep offensive arsenal.  Noel is more developed defensively than he is on the offensive end, and getting to learn from a low-post dynamo like Olajuwon could work wonders for Noel’s game.  With his size and length Noel could learn a lot from Olajuwon that he could apply to his own game on the offensive end, including post moves – the up-and-under, turnaround, and baby-hook – that would be very difficult to defend in today’s NBA. Improvement on the offensive end, coupled with his continued development defensively, could make Noel a very dangerous and dynamic player.

Bill Russell:  Russell would be an excellent player for Noel to model his game after. Russell was never the most dominant offensive option (he never averaged more than 19 points a game) but he was the definition of a winner, taking home 11 titles in his 13 year career.  Russell was a dominant rebounder, and he could give Noel some tips on how to improve his rebounding ability. Russell was also known for not only blocking shots, but keeping the ball in play after a big block in order to ignite a break for his team.  This is something that Noel has already showed an ability to do, and learning from the best at it would help to make Noel even more dangerous defensively.

Dikembe Mutombo:  Like Russell, Mutombo wasn’t the most dominant offensive player, but he excelled in the other areas.  There remains the possibility that Noel just isn’t the most offensively inclined player, even if he is able to improve on that end.  If that is the case, he still has the ability to dominate, just with other areas, just as Dikembe did.  Dominant defensively, Dikembe could give Noel some pointers on positioning, rim protection, and rebounding.  These skills allowed Mutombo to enjoy an extremely long, productive, and successful NBA career in which he was a central piece to several solid squads. Considering some similarities in their games, Mutombo seems like a great player for Noel to learn from.

Tim Duncan:  They don’t call him ‘The Big Fundamental’ for no reason.  Duncan is one of the smartest frontcourt players of all time, and even if Noel couldn’t duplicate Duncan’s skill set, nothing bad could come from picking the five-time champion’s brain. Noel could potentially learn a lot from Duncan about intricacies on both ends, ball movement, floor spacing, and just longevity in the game in general.  Duncan might be able to give him a tip or two on how to best utilize the backboard as well. Noel could stand to learn a lot from the game’s premier power forward.