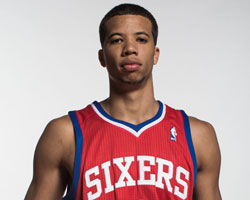 There is no denying that the relationships between NBA players on and off-the-court has changed over the last 15 years.  In this era of AAU basketball, powerhouse sports agents, mega sneaker contracts and social media, the majority of today’s NBA stars are well connected to each other and former players.  Thus, they have no problem texting an on-the-court rival for advice or working out with a division foe in the off-season or reaching out to a retired hoops legend in order to learn a new move.

Magic, Larry and Mike would never have dreamed of doing such things.

Again, times have changed and so today we are launching a new series here at Philadunkia.com that works off the above premise regarding current NBA players and applies it to the members of the 76ers roster.  Which current and/or former players should key members of the Sixers pursuit gym time with in order to develop and improve their game outside of Brett Brown’s watch?

Ervin “Magic” Johnson:  The first player I’d have the Sixers work with MCW would be Magic Johnson.  Magic, during his time in the NBA, was one of the best point guards in the league.  Today, Magic is regarded as one of the best point guards to ever play the game.  One thing that Magic has in common with Michael is that they are both very tall point guards.  Magic could definitely teach MCW a few things about passing the ball.  For his career, Johnson averaged 11.2 assists per game.  With Magic’s help, Carter-Williams could use his height as an advantage to see the entire floor.  MCW would definitely benefit from Magic’s lessons.  I wouldn’t be surprised if the two got together (outside the softball field) at some point during MCW’s time in the League.  Hopefully Magic can teach him some of those flashy passes that made he and the “Showtime” Lakers “must watch TV” during his time in the NBA.

Allen Iverson:  Another player I’d let MCW work with and learn from would be someone that we’ve all come to know and love.  Allen Iverson could be a great mentor for Michael.  Iverson left it all out on the court, as he would sacrifice his own body on a nightly basis to help his team secure wins.  Not many NBA players had or have the heart or pride which fueled Allen.  For this, he has become one of the most beloved sports figures in the city of brotherly love.  One thing that Allen did each night his team took the court was get to the free throw line.  During his time in the league, Iverson went to the line almost 9 times a game.  If Iverson can teach MCW to attack the basket and draw fouls consistently, it could help MCW take his game to the next level.  Another asset of MCW’s game that could be improved is his leadership.  Iverson could surely help the team;s current point guard become a much more vocal leader on and off the court.  Of course Iverson have some moments in which his leadership role on the team and his off-the-court decisions came into question, but there’s no doubt that his teammates loved and respected Allen.  With a little bit of coaching from Iverson, MCW could become one of the young leaders on the team.

Reggie Miller:  Michael had a poor year shooting the ball, especially from behind the arc.  That’s why I’d have Reggie Miller work with him.  Reggie, during his time with the Indiana Pacers, shot close to 40% from the 3 point line.  If MCW could learn from one of the best shooters in NBA history, he would become one of the most feared guards in the NBA.  Once other NBA teams realized that MCW wasn’t a great outside shooter, they began to play him for the drive.  If MCW added a consistent shot to his repertoire, teams wouldn’t be comfortable sagging off Michael during the sixer’s half court sets.  Michael would become a opponent’s worst nightmare if he added a consistent jump shot to his game.  Both MCW and the 76ers would benefit tremendously if Reggie Miller spent time with the team.

Chris Paul:  The final player I’d have Michael work with if I were the 76ers would be Chris Paul of the Los Angeles Clippers.  Regarded as one of the NBA’s best point guards, Paul would surely help MCW progress his overall point guard skills.   Many scouts and analysts have crowned Paul as one of the league’s most complete guards.  One thing that Paul does which would benefit MCW tremendously would be that he is able to see things before they come to fruition on the court.  If MCW could learn to do this, he can become one of the better guards in the league.  His newfound awareness, combined with his height, could become lethal on the NBA hardwood.