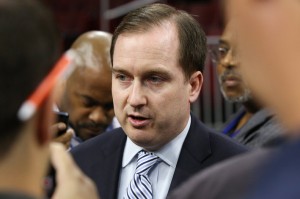 Last season, the Philadelphia Sixers gave minutes to an astounding 23 players throughout the course of the season. The season ended up being one of the most futile in Sixers history, where as a team they finished 19-63 which included a record tying 26-game losing streak. That’s correct, the team had less wins throughout the course of the year than players on its roster.

The NBA rules state that a team must have 13 players on their active list before the beginning of an NBA season and throughout the course of the season. Teams can also have two players on their inactive roster. In the second week of January, teams also have the opportunity to sign free agents to 10-day contracts solely for the purpose of replacing an injured player. A team can renew a player’s 10-day contract, but must waive or sign the player for the remainder of the season after the player has fulfilled two such contracts.

This isn’t the first time in team history that the Sixers have gone over 20 men on their roster, but recent history shows that when this happens, the results aren’t pretty.

So what’s the easiest way to make sense of all of this? Well there’s something to be said about team chemistry for one. Each season where the team had over 20 men on the roster also involved a big trade of one of their top players.

Losing major pieces on any team is going to cause a lot of problems in adjustments. Suddenly bench players are thrust into starting roles and newly acquired players are forced to learn an entirely new offense within weeks.

In the classic sense, trades were supposed to help fix a system that wasn’t working (like the Sixers 1995-96 and 1997-98 teams). In the current sense, trades are facilitated in order to either acquire future assets (like the Sixers in 2013-14), shed salary or in rare cases give teams involved a player they need to improve moving forward (think the Cavs/Timberwolves/Sixers trade this summer).

In the weeks following a trade, oftentimes teams will realize what players will work and what players won’t work. Cuts will be made and waiver wire additions will be completed. The fact that only one player is still around from the Sixers trades last season, Henry Sims, should give you a good idea about what happens in the current NBA.

The Sixers currently have 20 players on its training camp roster. The team has the ability to cut three players from camp and assign them to their D-League affiliate. A fourth player can be assigned as well, but there are more stipulations which come with it.

When the cuts for the final 15 players to start the season happen, Embiid and Carter-Williams will likely start the season on the inactive roster, leaving one permanent and one temporary position open. Hinkie is also a big fan of scouring the league for other players that were cut around this time and stashing them on the Delaware 87ers. In all likelihood, many of these D-Leaguers will see playing time with the Sixers next year as a result of injury and Hinkie will gladly call them up to see if they can show him something. Toss in a couple players in January on 10-day contracts and the Sixers will easily be over 20 players with registered minutes in 2014-15.

History will likely repeat itself and the team will likely be very bad next season. Maybe not all-time bad, but close. Topping 15 wins is highly questionable and maybe out of the extra 10 unknown players, Hinkie will find a diamond in the rough.

“A lot of what we try to do is separate the known from the unknown,” said Hinkie at media day Monday. “Right now we have a lot of unknowns when we look at our players and we’ll look around to try to see which ones could be keepers and which ones could fit into our program.”

They’ll have plenty of opportunities to do so, they just have to know where to look.