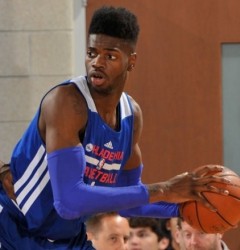 Today is the first day that Philadunkia’s home team will take the court for Training Camp 2014 and while we realize that the team’s fate for this season (“Year of the Double Tank”) is already sealed we still feel there are number of topics that deserved to be examined as the team hits the floor over at Stockton College.

Today we present the third installment in our new series here at Philadunkia that will ask and analyze key questions Sam Hinkie, Brett Brown and the Sixers will be facing during training camp 2014.  Each day a question will be posed to three Philadunkia scribes — Jeff McMenamin, Michael Kaskey-Blomain and C. Smith — and their insightful answers (hopefully) will be posted for you the reader to view an comment on.

Today’s training camp question is…“Many people have written about the possibility of Sims/Noel to start in the paint for the Sixers, but would that pairing give the team a better chance to win than Noel/Roberts Jr. or some other pairing?”

Jeff McMenamin:  Sims and Noel make sense as a pairing based on the fact that Joel Embiid likely takes over at center next season and Noel can adjust to playing power forward and learning his opponents skill-sets. That being said, playing center and power forward are pretty interchangeable in the NBA and the Sixers have an interesting talent who could also benefit from the extended minutes on the court — Ronald Roberts Jr.

Roberts Jr. impressed the Sixers coaching staff immensely at Orlando Pro Summer League, averaging 10 points and seven rebounds while putting on an aerial assault to the basketball hoop. His dunks rattled the arena on a daily basis and sparked confidence into the Sixers offense throughout the competition.

The Sixers already know what they have in Henry Sims, who’d likely start at center if Noel makes the switch to power forward, but they’ve only begun to tap into the potential of Roberts Jr. In a season of growth and development, Roberts Jr. might deserve a shot.

C. Smith:  Yes, the Sims-Noel pairing would give the Sixers a better chance at winning a few games then say a front-court duo of Roberts, Jr. and Noel.  I am a St. Joes season ticket holder, and Roberts is a freak of an athlete, but his offensive game is raw — like 8th grade CYO raw.  So, while a pairing on Roberts and Noel would be highly entertaining to watch, it would also be the most limited offensive front court in the League and certainly would not help Brown & Co. win any games.

Sims is not Bill Walton or Hakeem, but he has a few tricks in his bag that make him a more effective low post threat than Roberts or any other PF/C on the Sixers roster.  Sims did average 14.9 ppg. and 7.3 rpg. over the last 8 games (29 mpg.) of the 2013-14 season. Additionally, he posted a strong month in March 2014 — 10.9 ppg. and 7 rpg.  Again, I don’t think Sims is making any all-star games, but he having him start beside Noel gives the Sixers the best chance at wining 12-15 games this season.  If Roberts (or anyone else) gets the starting nod alongside Noel, the season of the “double tank” will have gone to a whole new level.

Michael Kasket-Blomain:  Yes.  While neither of these pairings will have an immediate impact on the win-loss column, the combination of Noel/Sims makes the 76ers better both in the short term and the long term.  Playing Noel next to Sims will help allow him to prepare for the addition of Joel Embiid into the lineup, and expand Noel’s game to encompass the four spot.  In his short stint with the Sixers last season, Sims was impressive, and at times showed ability to be a back-to-the-basket big with the ability to score the ball in a couple different ways. While Roberts looked impressive in Summer League, and is extremely athletic, he is not, yet at least, a starting-caliber NBA player.  He plays hard, but his abilities need to be expanded, on both ends of the court.

Sims and Noel would be beyond decent defensively, and could make it difficult for other team’s paint penetration.  While they might struggle to score on the offensive end, they would at least be able to generate some second-chances. Sims has the edge in experience also.

Roberts might make a nice rotation player for a developing Sixer squad, but at this point that is no guarantee that he even makes the roster, yet alone lands a starting spot.