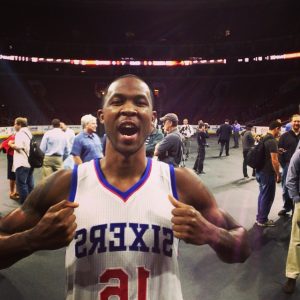 The most surprising member of Sixers media day on Monday afternoon was Chris Johnson, the 6-foot-6 swingman from Dayton that the Sixers had just claimed off waivers less than 24 hours beforehand.

Johnson was waived by the Boston Celtics last Thursday as part of the deal which sent current Sixer Keith Bogans to Cleveland. Needless to say it’s been quite a whirlwind for Johnson, who was wearing a freshly sewn No. 16 jersey at media day.

“It was depressing (being waived), but I talked to my agent and he said I’d have a good shot to make another team’s roster,” said Johnson. “He did his job and I feel really fortunate to be here.”

Johnson has been quite a journeyman in his three-years playing at the NBA level. His career started with the Sixers Summer League team in 2012 after he went undrafted. Since then he’s had stints with the Clippers, Magic, Grizzlies, Lakers, Nets and Celtics before re-joining the Sixers Sunday.

He’s logged the majority of his minutes for the Rio Grande Valley Vipers of the D-League, who drafted him 7th overall in 2012. Last season, he averaged 19.4 points, 6.8 rebounds and 2.5 assists in 20 games with the Vipers while shooting 47.0 percent from the floor and 36.7 percent from deep.

Where and if he’ll fit in at all on the Sixers 2014-15 roster is still in question, but Johnson thinks he can provide energy on both ends of the court for this young squad.

“I’m just looking to play in my role which is providing a lot of energy up and down the court,” said Johnson. “I know I can make plays and I’m just going to do what the coaches ask of me and stay consistent with it. I haven’t spoken to Brett (Brown) or the coaching staff yet but I look forward to meeting them and really getting everything started tomorrow.”

Johnson has two non-guaranteed years remaining on his contract. If Johnson makes the team’s 15-man roster this season, Philadelphia will then have the option of keeping him around for the 2015-2016 season or waiving him.

Johnson has played in a combined 48 NBA games with the Grizzlies and Celtics. His career averages are 5.8 points and 2.4 rebounds on 40.2 percent shooting in just 18.6 minutes per game.