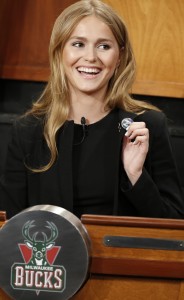 This edition of “Fo’ with the Foes” – Philadunkia’s advanced scouting series which with the help of an accomplished journalist from around the NBA beat or blog world, previews key upcoming 76ers games – features tonight’s opponent, the Milwaukee Bucks who blew a 24 point lead in their opener at Charlotte on Wednesday night and lost 108-106 in OT to the Hornets.

That game also featured the debut of the No. 2 overall pick in the 2014 NBA Draft, the highly coveted Jabari Parker.

After the jump, I’ll look a Fo’ key items for tonight’s game.  Additionally, we’ll get a little more insight into this Milwaukee team the Sixers face tonight from our colleague K L Chouinard at bucksketball.com, as KL will answer Fo’ questions on his Bucks from us here at Philadunkia.

1)  Jabari:  The Bucks out tanked the 76ers in 2013-14 and with the No. 2 selection in the 2014 NBA Draft they picked Jabari Parker out of Duke.  I wanted the 76ers to move up and grab Parker, but we all know that did not happen as Hinkie was focused on Tank 2.0.  Parker struggled in his NBA debut (3-9 FGAs; 8 points total) on Wednesday night.  Tonight, I’ll be watching closely to see what elements he has added to his game since he left Durham and for glimpses of potential greatness.

2) Sixers Defense — As we all know, the 76ers defense was turrible in 2013-14, lackluster in this preseason and suspect in the season opener vs. Indiana as well.  So I am hoping that Noel got the nerves out against the Pacers, that Brown gives more minutes to McDaniels, and those items combined with some work in the film room and at practice that the Sixers defense will show up tonight.

3) Henry Sims — I am expecting a solid season from Sims so I was somewhat surprised that he did not have a better game on Wednesday night.  I’ll be watching to see what he can do against the Bucks front court players like Larry Sanders, Ersan Ilyasova and John Henson.

4) Tony Wroten — In MCW’s absence, Wroten has been given a major opportunity to prove that he deserves to be a starter in the Association.  With his extended tick, I’m looking for signs that his game has matured.  I saw hints of growth during the preseason, and outside of several ill-advise 3PAs, I really liked what I saw in the season opener — 7 dimes to 1 turnover.  However for a career 21% shooter from deep he remains infatuated with the 3-ball.  He shot 5-16 (33%) during the preseason and 1-4 in the opener.  I know Brown’s offense dictates that the Sixers shoot a ton of 3’s, but that is not Wroten’s game.  If he can cut back on those 3PAs, I’ll believe he has finally gotten serious about sticking in this League and that he could develop into a every day starter someday.

Philadunkia:  The Bucks opened up the season with a tough loss to the  Hornets. What did you see that you liked from MIL in that game?

K L Chouinard at bucksketball.com:  The Bucks were terrific in transition and much less effective in the half court offense, especially in the 4th quarter when Charlotte’s defense settled in. The Bucks’ defense looked tight too, but the big problem on that end is that they yielded far too many second chances to the Hornets.

Philadunkia:  OJ Mayo was inefficient on offense and slumped a little last year. Some say he was out of shape. Do you think he will rebound to form in 2014-15?

K L Chouinard at bucksketball.com:  Yes, absolutely. O.J. wasn’t terrible last season. He was actually a much better defender than Caron Butler or Gary Neal.  But when he got in a funk and put on some weight, the Bucks simply DNP-ed him for a huge chunk of games as they tried to tank to a top pick. Now he’s in much better shape and meshing well in Kidd’s offense.

Philadunkia:  What are your expectation for Jabari Parker this season?

K L Chouinard at bucksketball.com:  I expect Parker to start the whole season and eventually turn into a focal point of the Bucks’ offense, especially at the end of games.  His offensive game is really diverse and he can score is so many ways.  He’ll probably score around 15 points per game on something like 44% shooting from the field.

Philadunkia:  According to a number of NBA scouts I have spoken with and everything I read online Giannis Antetokounmpo is an NBA superstar in waiting.  What are you thoughts on the youngsters potential?

K L Chouinard at bucksketball.com:  Antetokounmpo is the real deal. He can handle the ball, rebound, finish at the rim, block shots, and he can even fill in as a point guard/point forward in a pinch.  Right now, his strength as a player lies in transition. He is absolutely terrific on the fast break.

The only concern for the moment is his jump shot.  He went just 2-for-28 on shots longer than 7 feet in the preseason and he hasn’t figured out quite what to do when defenses sag off of him.  On a brighter note, he made his only three-point attempt Wednesday.

Thanks to KL Chouinard for his time and answers.