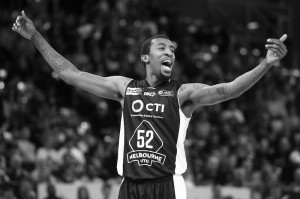 After a very encouraging performance against the Derrick Rose-less Chicago Bulls on Friday night, the 76ers wrapped up another lost weekend by getting trounced in Toronto 120-88.  The score doesn’t even begin to tell the story as the Sixers were posterized and humiliated by one the best teams in the Eastern Conference all night.  Instead of rehashing that debacle up north through a Rapid Reacts recap and further depressing everyone, we decided to post something a little more positive.

If you have been surfing the old inter web for overseas basketball scores and highlights, then you probably know that 76ers’ 2014 draft day acquisition Jordan McRae is playing extremely well for the Melbourne Tigers of Australia’s National Basketball League.  In fact, McRae’s play (22.6 ppg.) has been so nice, I decided to give him a call to discuss life in Australia, his internet fame and what elements of his game he’s working on “Down Under”.

Philadunkia:  Let’s start off by finding out how overall things are going for you in Australia?

McRae:  Ohh things are great down here for me.  This is a great franchise I am with and I am getting a lot of work in.  I think I am playing solid ball and learning a lot. vOff the court, Australia has been good.  It’s a beautiful part of the country and I am hoping that I get to do some traveling.

Philadunkia:  Obviously head coach Brett Brown has deep ties and connections to the basketball world in Australia.  How much influence did the 76ers have on your decision to play in the NBL for the Melbourne Tigers?

McRae:  Coach Brown told my agent that this (playing in Australia) would be a good experience.  The relationships he (Brown) has with the coaching staff here was key and he knew that this NBL was a great league.

Philadunkia:   The 360 degree dunk you pulled off the other night was amazing and was all over the internet.  You executed the same move in college, so I am wondering if you had planned to display that dunk at some point this season or did it just come to you during the game?

McRae:  I knew I was capable of pulling it off and it’s always in the back of my mind. But I had not planned it for that game.  Just seeing that I was all by myself on that play, I wanted to do something to get the crowd involved because the energy was kind of low at that game.  I had an opportunity to give the crowd and my team some energy, so I went for it.  It killed the other team mentally as well.

Philadunkia:  In a recent win over the Wollongong Hawks scored 32 points for the Melbourne Tigers.  Was that a case of being in the zone or was it by design because of a match up in your favor that the coaches/team liked?

McRae:  I just got a lot of good looks within our offense.  Our coach gives me the freedom to take shots, so it was just a question of taking and making good shots within the framework of our offense.

Philadunkia:  Talk to us for a minute about the Melbourne Tigers and the coaches you are playing for this season.

McRae:  This is my first year being a pro, so I am learning something new every day from this experience.  My teammates and coaches have been great and I am just trying to learn as much as I can while I am here.  We have a veteran team with three guys who played in the Olympics before.  Right now we’re playing fine and trying to mesh.  When the guards have the ball (the head coach) wants us to push the ball. They really want us to get out and run here.  It’s a guard friendly offense.

Philadunkia:  How would you describe the style of play in the NBL?

McRae:  That’s the thing about this league.  You get all kinds of different looks from game to game.  Some teams will press the whole game.  Some teams sit in a zone the whole game.  Certain teams pressure the shooters (man to man) on the perimeter.  Others use their bruisers to make it a physical game.  It’s really been an interesting experience so far to see all of the different styles.

Philadunkia:  How do you prepare for / adapt to playing against a different style opponents every night?

McRae:  I listen to the coaches and the scouting reports.  Then I just try to play my game every night.  One game that might be driving the ball in the lane for a basket; the next it might mean kicking it out to open teammates for threes.

Philadunkia:  What is your typical day like as a professional basketball player down in Australia?

McRae:  On a practice day, I’ll come in early and do some defensive drills.  Then I’ll get shots up.  After that I would normally lift weights.  Next might be a walkthrough of something new element the coach wants to do or a film study.  Then we have practice as a team.  I like to get more shots up after team practice and then I head home.  I’ll watch a movie or go grab something to eat.

Philadunkia:  What elements of your game are you looking to develop while you are in Australia?

McRae:  The 76ers know I can put the ball in the basket, but I am looking to add a better 3-point shot.  I also think I can be a way better defender because I am long and athletic.  So I am working on the fundamentals of guarding the ball because I want to be a lock down defender.

Philadunkia:  How often do you speak with members of the 76ers coaching staff / front office?

McRae:   I talk with assistant coach Chad (Iske).  Well we don’t really talk, but we text a ton.  He tells me to rebound more and concentrate on defending.  I also talk to Jeremi Grant after every game.  We became close during the summer league and we talk about how I played or things that he may have noticed in a game.  They (the Sixers) see every play from down here.

Philadunkia:  Do you get to watch many NBA games in Australia?

McRae:  Yeah, definitely.  It depends on what time we get out of practice.  Games (NBA games on TV) start here around noon, so depending on what time I get home I watch as many as I can.

Philadunkia:  Are you catching many 76ers games?

McRae:  I actually am.  I bought NBA League Pass so I can watch the Sixers whenever I want to.

Philadunkia:  When you are watching the 76ers games, do see times where you could help the current roster be more competitive?

McRae:  Right now I am focused on what’s going on here, so I watch the games for entertainment.  Of course I think about playing in the NBA, everybody does, but from down here I just watch to see how guys like Tony Wroten are playing and to be entertained.

Philadunkia:  Outside of Grant, do you keep in touch with any of the current 76ers players?

McRae:  Yeah.  I text with Tony (Wroten).  The other day I was telling him great game and to keep it going.

Philadunkia:  What player in the NBA are you watching and then trying to add elements of his game to your skill set?

McRae:  I really like the way Klay Thompson of the Warriors plays.  I like the way he is a two way player.  He’s great offensively, but he also guards one of the opponent’s best scorers at the other end.  Right now I am trying to become more of a two way player, so I watch guys like Klay who can do it all at a high level and try to learn from them.

Philadunkia:  Besides watching basketball what else do you in Australia when you are away from the court?

McRae:  I catch up on a lot of movies and shows.  I watch Martin, Fresh Prince, you know older shows.

Philadunkia:  What do you miss the most about the States?

McRae:  Outside of my family, I miss playing ball with guys I have known for years. Playing here is fun, but it’s definitely different and that’s a big adjustment.

Philadunkia:  A lot of guys who go play overseas straight out of college take family or friends for company.  Did you bring anyone to Australia with you?

McRae:  No.  No one was really in a spot right now where they could just to come over here, so it’s just me.  No entourage.

Philadunkia:  Have you discovered any favorite spots in Melbourne where you can go to relax or grab a bite to eat?

McRae:  They have a Friday’s here (Laughs).  The local food is really good here too, so it has not been much of an adjustment on that end.

Thanks to Jordan for his time and answers.