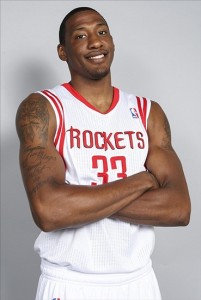 Sam Hinkie’s roster turnstile continues this morning as multiple online reports  — we believe Marc Stein Tweeted it first — are stating that the 76ers general manager is about to sign / call up Robert Covington of the D-League’s Grand Rapids Drive.  The 76ers roster already has 15 players on it, so someone who dressed for Sunday night’s debacle in Toronto is about to get waived.

The 6-foot-9 , 215-pound forward with a 7-foot wingspan spent the majority of last season with the Rio Grand Valley Vipers of the NBA Development League where he earned rookie of the year honors and for what it is worth, was league’s all-star game MVP.  Covington also had a cup of coffee with the Houston Rockets last season (7 games) and put up 2.3 ppg. as well as less than 1 rebound per contest.

Back in July, Covington played for the Rockets in the NBA Summer League out in Vegas — 5 games: 12 ppg. & 5 rpg.  He also saw action in one of the Rockets 2014 preseason game (4 mins — 3 pts), but apparently did not impress Darryl Morley as the Rockets waived the Tennessee State product on October 27th, 2014.  Still, it’s interesting to note that the Rockets did recall him from the D-League seven different times between November 2013 and April 2014, so they must have liked something they saw in Covington.

I exchanged texts with one Western Conference front office executive who commented the following on Convington:

“He’s long.  Can make a shot.   Decent player.  Not much different than all those other characters they audition on a nightly basis.”

So we got that going for us which is nice (In my Best Carl Spackler voice).

Covington averaged 23.2 points per night in the D-League last season thanks to 44% shooting from the field. Additionally, Covington grabbed 9.2 rebounds  per night.  His 2.4 steals per game were second best in the D-League.  He was widely viewed as on of the top prospects in the NBA’s official minor league system.  Included below for your viewing pleasure is a Robert Covington D-League highlight reel:

You can read his full DX profile here.