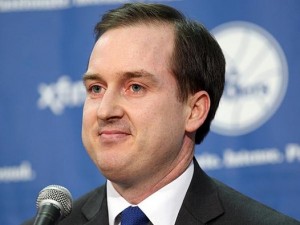 In business, there is a concept called Fitness Landscape.  The concept is derived from evolutionary theory and it is accepted and exercised widely in the business world.

Here how it goes:  Imagine a system that we want to improved performance from.  The system can be a biological species, a business system, or for the sake of our conversation an NBA team such as the 76ers.  This system is located on a plain or a landscape that measures its performance.  Any time the performance improves the system goes up to reach a peak.  Anytime the performance drops, the system will go down into a valley.

The performance landscape (a landscape hereafter) has many peaks and valleys, with mountains of various heights and valleys of various depths.  There is always a peak of the maximum height called “global peaks” (maximum) along with other lower peaks called “local maximums”.  There are many points of various depth or valleys as well.   These are deep valleys and deep ditches some are very deep and called “points of attraction” and have to be avoided at all costs.   Going into a point of attraction would result in the sure death of the system.

Our system (species, business, the 76ers, etc.) can be located at any point on this landscape.  Every location on this landscape characterizes the performance of the system.  For example, the 76ers can be on local peak – think making the playoffs as a #7 or #8 seed and a 1st round exit.  The global peak (maximum) in this case would be winning the NBA championship.

The fitness landscape theory says, for a system to go from an existing location on a local peak (good but not excellent performance – the 76ers previous to the Harris/Hinkie regime) to a future state on a global peak (excellent performance – NBA title), it may have to come down from the local peak into a valley, get maximum help and find a way to reach to the global peak.  In other words, to become very good when a system is average it has to become very bad first, get help and find a way to go up.

That is why some big business go into bankruptcy to get help (getting rid of creditors, getting government money, etc.) and may come out of bankruptcy very successfully.  However, they can also go out of business. General Motor was a positive example of a bankruptcy case.  When it filed for bankruptcy, GM got rid of its creditors, received federal aid money and reorganized its leadership.  In a shorter amount of time than expected, GM was able to regain its status as a leading automobile manufacturing company.  It may seem odd to some to compare Sam Hinkie’s rebuilding strategy (tanking for high draft picks; freeing up cap space; acquiring assets) as something similar to GM’s bankruptcy filing and receiving Uncle Sam’s help.  However, if you look closely, it’s not that big of a stretch. GM had to go bankrupt to get the aid it needed and Sam Hinkie’s franchise had to become very, very bad (0-15 in 2014-15) to get the top draft picks it needs.

Now the downside. When a system goes down into the valley trying to find a way to a better peak it must navigate around the points of attraction (the deep ditches). Otherwise, it will fall down into one and die.  The “point of attraction” is a term used to describe when a business dies (Woolworth, Nortel, etc.), a species becomes extinct (many example through history of life on earth), and in the case of a sports team it means the team has to start all over from scratch with a new general manager, coaching staff, players, and perhaps even new owners.  Therefore, when following the fitness landscape theory for improving the performance of the system, it is most important to navigate around the “point of attraction” and try not to fall into one.  A good analogy for falling into the point of attraction is start by thinking of a bowl containing a ball bearing.  This will move around the bowl until eventually it comes to rest at the lowest point.

So let’s now relate this to what Sixers are attempting with their rebuild. Given that Sam Hinkie appears to own a scientific mind and his decisions so far as the 76ers general manager (to be great you need to become really bad and get help via high draft picks), I am almost sure he is following the Fitness Landscape strategy. But, what if he has not managed to navigate around the attraction points (the deep ditches) and is guiding the 76ers into one just like a ball bearing falling to the bottom of a bowl.  If this is the case, a disaster is waiting for this basketball team that would mean the end of Brown/ Hinkie era for sure and another rebuilding period for Philadunkia nation to endure.

We are warning Sam Hinkie and the 76ers to avoid the deep ditches and as fans we hope they monitor the state of the matter carefully to avoid a disaster which may require revising their strategy in-flight.

Alex Hootan is a special guest contributor to Philadunkia.

Alex holds a PhD in engineering from UMass and is an expert in advanced data analytics.