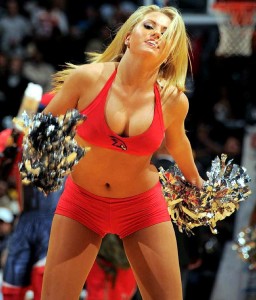 This edition of “Fo’ with the Foes” – Philadunkia’s advanced scouting series which with the help of an accomplished journalist from around the NBA beat or blog world, previews key upcoming 76ers games – features tonight’s opponent, the Atlanta Hawks who are a riding a hot streak right now having won 7 straight games, and 9 of their last 10.  Still, I like the 76ers chances of stealing a win tonight for reasons that I will discuss after the jump.

(I can’t believe I just typed that line.)

After the jump, I’ll look a Fo’ key items for tonight’s game. Additionally, we’ll get a little more insight into this Atlanta team the Sixers face tonight from our colleague David Menze at Soaring Down South, as David will answer Fo’ questions on his Hawks squad from us here at Philadunkia.

1) If the 76ers Can Stay Competitive and Possibly Win — The 76ers have won 2-out-of-their-last-3 and have played respectable basketball for long stretches over the course of those 3 games.  Yes, the Hawks have won 7 straight, but they have feasted on bad teams over the last two week.  Only one of those wins came against a .500 team — a 100-91 win over NOP back on 11/28 — and I am not sold that Hawks are “for real” as the kids say.  So I am interested to watch if the Sixers come out tonight and use the momentum they have built to keep this one close and possibly steal a road W.

2) 76ers Offense — As we all know, the Sixers have struggled to score the ball all season.  The return of MCW and the emergence of Robert Covington has led to better point production of late (three 100+ point games recently), but I will be interested to see if the Sixers can maintain that offensive effort against a much improved Hawks defense.  According to ESPN.com, the Hawks allowed 104.3 points per game through the first 13 contests but have lowered that scary number to 89.1 during the win streak.  The NBA’s best mark during that stretch of games.  Atlanta’s suddenly stout defense will present extra problems for the Sixers and I’ll be taking notes on any new wrinkles I see from Brett Brown that attempt to take advantage of MCW’s and Covington’s recent scoring surges and secure the Sixers a win.

3) 76ers & Turnovers — The Sixers are are the most turnover prone team in the League (18.4 per night).  The Hawks average 8.7 steals per game which ranks among the best in the Association (T – 6th).  The Sixers inability to take care of the rock is something that must be solved for one night if the 7-6 are to stay competitive in this game.  Luckily it looks like TWroe will be out of the lineup.

4) Road Magic — The 76ers only two wins of the season have come in their last two ROAD games.  Maybe, just maybe, this team has bonded as Brett Brown claims and it’s better for this squad to be on the road.  As long as they are the away team, this roster doesn’t have to face the extreme negativity hurled at them on a nightly basis here in Philadelphia.  After all, the players and coaches did NOT ask to be part of the season of the double tank.  They were thrown into this awful situation by Sam Hinkie.  Even though I believe it’s the right plan for the long range interests of this franchise, it cannot be easy to be a Sixer player right now and get heckled/booed at every home game.  So perhaps the road is where this team is at its best right now. I’ll gather some more evidence for that theory tonight.

Q&A with David Menze at Soaring Down South

Philadunkia:  Obviously the Hawks are on fire right now — winners of 7 in a row and 9 out of 10.  So what’s been one or two of the keys to their success of late?

David Menze at Soaring Down South:  I’d have to say overall offensive efficiency is the main key to the Hawks’ seven-game win streak. Atlanta shares the ball so well, ranking 4th in the NBA in team assists per game with 25.5 a night, and that allows the Hawks to get the shots they want, which results to a very high field goal percentage, as they rank 4th in the NBA in team shooting with a .475 overall clip.  During the hot streak, the Hawks have shot 50% or higher five times and have had a higher team assist total in all seven games.

Philadunkia: Not to burst your bubble or anything, but it’s worth noting that the Hawks win streak has come against teams that are playing .500 or worse basketball. Are you anxious to see how this squad, which seems to have found something in the last two weeks, now matches up against some of the better teams in the League?

David Menze at Soaring Down South:  Not really, I’m very confident in Atlanta’s ability to matchup up with elite NBA teams. Honestly, the last two weeks have been like practice for the Hawks, and like you said, because of that they seemed to have found their rhythm and are playing great team basketball.  Good teams are supposed to beat bad teams — the Hawks are simply taking care of business.

Philadunkia:  How surprised are you that the Hawks are currently 14-6 and in 1st place in the Souteast Division?

David Menze at Soaring Down South: Very surprised. I knew they would be good because Al Horford is back and healthy again, but I didn’t think they would get off to this type of start.  I was expecting something like a 11-9 or 12-8 record.  However, this hot start shouldn’t be too shocking.  Early in the 2013-14 campaign last year, before Horford suffered a season-ending injury in late December, the Hawks were the #3 seed in the East.  It’s great to see the team fully healthy and building off last season’s success.

Philadunkia:  What’s one item that you have watched/analyzed so far this season with the Hawks that concerns you about the level of success they can have in 2014-15 season?

David Menze at Soaring Down South:  Nothing concerns me about the level of success the Hawks can achieve this season. I think this team will actually surpass mine, and a lot of other people’s expectations in 2014-15.  Most people see the Hawks as a perennial 1-and-done team in the playoffs, but the way Atlanta is playing is eye-opening. Jeff Teague has taken his game to another level, same goes for backup dynamo Dennis Schroder, Paul Millsap is playing like an All-Star again, Al Horford is regaining All-Star form, Kyle Korver continues to shoot lights out and DeMarre Carroll is a jack-of-all-trades.  The Atlanta Hawks are a very encouraging team.

Thanks to David Menze for his time and answers.