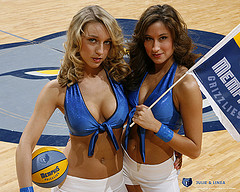 This Saturday edition of “Fo’ with the Foes” – Philadunkia’s advanced scouting series which with the help of an accomplished journalist from around the NBA beat or blog world, previews upcoming 76ers’ games – features tonight’s opponent, the Memphis Grizzlies, who defeated the Charlotte Hornets last night; have won 3 straight; 7 of their last 10 games and are currently in first place in the Western Conference.

After the jump, I’ll look a Fo’ key items for tonight’s game.  Additionally, we’ll get a little more insight into this Memphis team the Sixers face tonight from our colleague Chip Crain at 3 Shades of Blue.com, as Chip will answer Fo’ questions on his Grizzlies from us here at Philadunkia.

1)  The Opening Quarter for Memphis:  The 76ers and Grizzlies both played Friday night, but the Grizz played in Memphis and then flew to Philadelphia for this game against our 76ers.  I’ll be watching to see if the second game of this home-then-road back-to-back set produces some tired legs for the Grizz and they come out sluggish.  Of course the Sixers will have to make shots and play defense in order to take advantage of a slow start by Memphis.  We all know that’s a long shot — at best.

2)  MCW vs. Conley:  I am a big fan of Mike Conley’s game (16.9 ppg.;  6 apg.; 47% on FGAs; 44% on threes) and believe he is highly under rated by the average NBA fan, so I am very eager to witness Conley and #1 for the 76ers go head-to-head.  Specifically I’ll have my eye on whether or not MCW can stay in front of Conley on defense as well as the turnover numbers.  Conley is one the best lead guards in the Association at taking care of the rock (3:1 assist/TO ratio) and as we all know MCW is a turnover machine.

3)  Henry Sims vs. the Grizz Bigs:  On Wednesday night, Sims did not have a great game (season low 13 mins. — 1 point) and to be honest that made for two subpar performances in a row from the usually reliable C/PF.  In his two games leading up to last night’s contest Sims posted averages of 5 points and 4 boards on 4-13 shooting from the field (30%).  That result of those two poor performances was that he lost his starting spot to Robert Covington.  Sims appeared to take the benching well as last night he scored 14 points on 6-8 shooting and was steady for the Sixers all night.  I believe that Sims will be a big contributor for the Sixers all season, but he needs another solid performance to get his game back on track.  However, with the Memphis bigs in town tonight that could be a difficult task.  Marc Gasol and Zach Randolph comprise one of the best frontlines in the Association, so I’m interested to witness how Sims plays against this imposing duo.

4)  Rob Covington:  Okay playa, it’s your time to shine.  Covington received the first NBA start on Friday night and responded with 20 points (leading scorer) and 6-10 shooting from three.  He also grabbed 6 boards.  In his last 5 games Rob is averaging 18.6 points and 5 rebounds per night.  Additionally, he’s shooting above 50% from the field and from deep.  Needless to say he is making the most of his opportunity here in Philly.  Memphis owns one of the best defenses in the League and they defend the perimeter tenaciously, so tonight I will be very curious to see how many looks Covington gets; the quality of those looks and how Covington performs under pressure from a great defensive team.

Q&A with Chip Crain at 3 Shades of Blue.com:

Philadunkia: Obviously things are going well in Memphis (17-4) so far this season.  How much of this success comes as a surprise to you?

Chip Crain @ 3 Shades of Blue.com: I definitely didn’t expect a 17-4 start but I did believe this team had the potential to be much better than the national press was giving them credit for at the start of the year.

I still am surprised the team is 17-4. Carter had off-season surgery and has started slow.  Quincy Pondexter has struggled to get into form. Nick Calathes had to serve the final 13 games of his suspension and is rusty.  Jon Leuer has become a strong bench presence lately but he looked scared at the start of the year.  Actually, the bench started the season terrible overall. Somehow the team did enough to win games early and now they seem to be hitting their stride.

Philadunkia:  The Memphis defense ranks #1/2 in the League in points allowed (94 per), but the Grizz have given up 100+ in two of their last 3 games.  Has a crack in the Memphis defense been exposed or was it just the fact that the Grizz played very good offensive teams (SAS & DAL)?

Chip Crain @ 3 Shades of Blue.com: Maybe a combination of both.  Dallas and San Antonio are both excellent offenses and don’t forget the slap down the Grizzlies suffered in Houston just four games ago.  Teams have looked good against the Grizzlies more often than they did last season. Part of that could be that team’s have figured out the team but I believe it is more for two simple reasons.

First, last season the Grizzlies played their starting five much longer in games.  This season Joerger seems more content to let the bench work out their problems instead of yanking them out when opposing teams start making a run.  That has resulted in more runs than in the past but it should pay dividends as the season progresses as the second team gains confidence.

Second, Joerger has told the wings to go under screens instead of fighting over the top.  Good shooting perimeter teams have taken advantage of this to hit a high percentage of 3 point shots.  On the flip side, teams have struggled to score in the paint and at the end of games those long shots get much more difficult.  This is a conscious decision by the team but when teams are hitting from outside like Houston, San Antonio and Dallas for a half, it looks like a bad idea.  However, we are finding that denying teams paint points is more efficient in the long run and so I expect this strategy to continue until teams show they can win a game consistently being denied shots in the paint.

Philadunkia:  What issue have you seen with the Grizzlies so far this season that needs to be corrected if the team is going to make a deep playoff run?

Chip Crain @ 3 Shades of Blue.com: One thing I was worried about already seems to have been corrected.  The bench started the year terrible.  They literally couldn’t be trusted for more than a few minutes at a time.  Joerger handled this by alternating the starters with the bench until the group became more comfortable.  Joerger still needs Vince Carter and/or Quincy Pondexter to become more efficient when on the court, but Beno Udrih, Jon Leuer, Kosta Koufas and especially Tayshawn Prince have found a nice routine and have become one of the better second units in the league.

Perimeter shooting could be the problem that needs to be addressed.  Many people have suggested the Grizzlies need to acquire more. Lee and Conley have been consistent but Carter, Pondexter and Allen are terrible right now from the three point line.  Either one of the three need to improve, and you can forget Tony Allen being one of them, or the team will need to make a move of some kind. History suggests the Grizzlies will be fine with the players they have but no one will really know until it is too late to make a change.

Philadunkia:  I think Mike Conley is one of the most under rated point men in the League. Tell the people at Philadunkia just how good Conley is on a nightly basis…

Chip Crain @ 3 Shades of Blue.com:  Mike Conley is under-rated somewhat because he doesn’t do things spectacularly.  He just does everything well. He isn’t a big shooter but when the Grizzlies need a basket they almost always call Mike’s number.  He isn’t a high flying dunker but being ambidextrous allows him to score inside with either hand so you can’t cheat to either side to cut him off.  He’s not overly physical, but it is rare when an opponent has a good scoring game against the Grizzlies since Conley knows how to use what he has to take away opponents favorite moves.  He doesn’t put up huge assist numbers but takes excellent care of the ball making his turnover to assist ratio among the best in the League despite the relative small number of assists.

When you think of a floor general do you want a shoot first, high flying player who throws passes all over the place or do you want someone who controls the game, runs the offense to perfection, defends as well as anyone at his position and makes clutch plays when they are called for but otherwise allows his teammates to do the things that get noticed by the mass markets?  Conley is clearly the latter type of leader.  He doesn’t make plays that draw attention.  He just does everything right so the team benefits…

Chip Crain @ 3 Shades of Blue.com:  I know you didn’t ask this but I’d like to say one more thing.  I think Philadelphia is making the right moves to rebuild their franchise.  I know it is painful right now to watch your team lose night after night.  I was covering the Grizzlies for the back to back seasons as the worst team in the league.  Believe me when I say I know what you are going through right now.  However, the team is building for a future that should be sensational.  Young players in the NBA don’t know how to win at this level.  They make mistakes.

However with those mistakes comes experience and with experience comes expertise.  The 76ers are stock-piling a lot of talent.  It won’t happen immediately and most likely some of these players won’t be here when things do turn around but they better days aren’t as far off as they seem.  I expect the 76ers to either trade one of their young players for a veteran who can help the team learn how to win or at least use the off-season to sign someone who can.  It won’t seem like   a great move at the time but you are going to look up one day and suddenly realize the team is really good.

Consider the Grizzlies.  They had just drafted Mike Conley when they traded Pau Gasol for an expiring contract, a late 1st round draft pick, an unsigned 2nd round pick who happened to be Pau’s little brother too and some future picks from a team likely to be among the best in the League the next few years.  They used the cap space to trade for Zach Randolph who was unwanted in LA after they drafted Blake Griffin.  They signed Tony Allen and suddenly the Grizzlies had their team that has won more games in 2015 than any other team.

It seemed impossible things would ever turn around but it did and it happened so quick most people didn’t realize it until they had defeated the Spurs as the 8th seed and taken OKC to 7 games in the conference finals.  I believe the way Philadelphia is building this team is very similar.  The youth will get better, vets will be added as needed to help them get over hurdles as they come and very soon people will be talking about how amazing the 76ers turnaround has been.

Thanks to Chip for his time and answers.