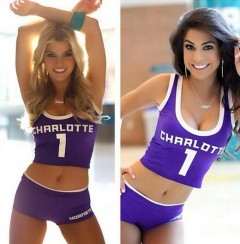 This edition of “Fo’ with the Foes” – Philadunkia’s advanced scouting series, which with the help of an accomplished journalist from around the NBA beat or blog world, previews key upcoming 76ers games – features tonight’s opponent, the Charlotte Bobcats, who are unexpectedly awful this season (6-19) and feature Lance Stephenson who is currently the subject of numerous NBA trade rumors.

After the jump, I’ll look at Fo’ key items for tonight’s game. Additionally, we’ll get a little more insight into this Charlotte team the Sixers face tonight from our colleague Spencer Percy at queencityhoops.com, as Spencer will answer Fo’ questions on his Hornets squad from us here at Philadunkia.

1) The Sixers to Win:  Simply put, the Hornets are mess right now and in the near future I don’t see a better opportunity than tonight for the Sixers to grab their 1st home victory of the season.  The Hornets have lost 4 straight; 14 of 16; are 1-10 on the road this year and as I previously mentioned, they have trade rumors swirling around key off-season acquisition Lance Stephenson. Stephenson likely won’t play tonight and that’s great news for the Sixers weak perimeter defense.  All the makings of a W here, no go out and get one fellas.

2)  Proof of Life – KJ:  If you think Stephenson has been bad so far in 2014-15, then witness what Sixers rookie KJ McDaniels has done of late.  After a tremendous start to the season, McDaniels has crashed and burned over his last 5 games — 5.5 ppg. and 4 rpg. to go with 25% shooting from the field and .071% from three (1-14).  He has shot 33% or less in each of his last 7 games.  This week he admitted that he may have hit the “rookie wall”.  I don’t want to go hear any of that garbage from a rookie on this tanking team.  Early on I’m calling on MCW get the ball to KJ on the break for an authority dunk so we can get this kid rolling again.  Outside of Robert Covington’s shooting, KJ’s highlight reel plays are the only thing that keeps me tuned in for every game.

3)  Covington’s Stroke:   Speaking of Covington…The jury is still out on whether or not #33 has a future in Sam Hinkie’s rebuilding process, but given his shooting numbers in the last two games — 11-31 on FGAs (35%) & 5-19 from three (26%), right now it seems doubtful.  Personally I’m starting to apply the label “streaky shooter” to Covington — in his last 6 games he has 3 nights at 60% or more shooting from the field and 3 at #31% or less.  I hope he eventually proves me wrong because it sure would be nice to find a diamond in the rough that is the D-League.  Tonight I want to see Covington get back on track against a Hornets defense that ranks 22nd in points allowed (101.8); owns a Def Rtg of 108.6 (24th) and does not guard the perimeter all that well (opponents shoot 38% from three).

4)  Sixers Bigs vs. Al Jefferson:  It’s no secret that Al Jefferson has been slumping in the month of December (more on that later). However, Al exploded Wednesday night against Phoenix for 28 points and 10 rebounds in a 5-point loss.  Jefferson finished 13 of 22 from the field, but scored only 4 points in the 4th Q as the Hornets let the game slip away late.  No matter how bad Al may be struggling this season, neither Sims nor Noel can stop Jefferson on his own.  So I am interested to see what (if any) schemes the defensively challenged Brett Brown uses to keep “Big Al” from scoring 30+ points tonight.

Q&A with Spencer Percy at queencityhoops.com:

Philadunkia:  Obviously the Hornets season so far has not gone according to plan. What have been one or two of the major issues for this squad?

Spencer Percy at queencityhoops.com:  Unfortunately, Lance Stephenson has been a big part of the Hornets struggles.  He’s simply not a good fit beside a post player such as Al Jefferson who constantly clogs the lane. Lance has also been brutal from behind-the-arc this season, so he hasn’t created any space for Kemba Walker to play in.

Al Jefferson has also been a shell of himself from last season. He has seemed to lose a step, and we’re seeing the negative affects of it on the defensive end – teams are getting tons at the rim with little contest.

Philadunkia:  Needless to say, there are some trade rumors surrounding free agent acquisition Lance Stephenson.  If were the Hornets GM, how would this situation play out?

Spencer Percy at queencityhoops.com:  I think the team badly wants to trade Lance, but the league smells blood in the water with the Hornets desperation and are asking for a first-round pick to take on the troubled Stephenson.  I think Charlotte will be able to move Lance, but they won’t get a ton back – with the way this season has gone in addition to his already skeptical reputation, this has simply been a failed experiment for the Hornets and they’re going to have to feel the pain.

Philadunkia:  What are one or two positive items you have seen from the Hornets this season?

Spencer Percy at queencityhoops.com:  Gary Neal has been the entire offense in stretches this season, and with his expiring deal, if the Hornets find themselves out of the postseason race towards the Feb. 19 trade deadline there should be plenty of contenders lining up to get Neal for possibly a pick.  Cody Zeller and Bismack Biyombo have also shown significant signs of development so far this season – two other potential assets in a trade scenario if the team decides to blow this all up, which I don’t think is out of the question.

Philadunkia:  Al Jefferson simply killed it in November (20 ppg. & 7 rpg. on 49.8% shooting), but his numbers so far in December are down (15/9/43%).  Have you noticed something amiss about his game this month or is this just Big Al returning closer to his career numbers?

Spencer Percy at queencityhoops.com:  Like I said, he’s been a step slower all season long.  In addition, I think that the this teams continuity, or lack thereof, has gotten the best of him and it’s affecting his play.  Last season what a slight outlier in Jefferson’s production, but teams have it scouted well now, regularly send two to guard Al, and the Hornets added zero floor spacing to put around him like they tried to fool everyone to think they did.

Thanks to Spencer for his time and answers.